Reanimation package of reforms > News > Statements > Law No. 5610 on Amendments to the Code of Criminal Procedure of Ukraine (with regard to improvement of the mechanisms to ensure the tasks of criminal proceedings) grossly violates human rights and threatens business in Ukraine 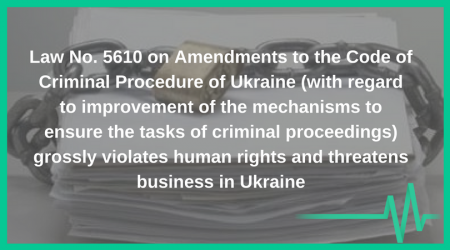 Law No. 5610 on Amendments to the Code of Criminal Procedure of Ukraine (with regard to improvement of the mechanisms to ensure the tasks of criminal proceedings) grossly violates human rights and threatens business in Ukraine

On March 16, the Verkhovna Rada adopted Law No.5610 “On Amendments to the Criminal Procedure Code (with regard to improvement of mechanisms for enforcement of the tasks of criminal proceedings)” lobbied by the Prosecutor General.

However, the Law approved in the second reading still contains a number of provisions that restrict the constitutional rights of citizens, are contrary to the standards enshrined in the European Convention on Human Rights and the principles of proceedings guaranteed by the CCP.

1) Exclusion of the time to review the records of proceedings from the total period of pre-trial investigation (Article 219 of CPC) violates the right for protection and reasonable terms of proceedings. According to the approved amendments, investigating authorities are not limited in time and procedures for the provision of case records to the defense, which gives them opportunities for substantial abuse – i.e. artificial extension of the time for providing these records for months or years. During this time, the person will indefinitely remain in the status of a suspect, and may be subject to enforcement measures (seizure of property, removal from office, revocation of a privilege), as well as precautionary measures that are not related to detention (house arrest, wearing an electronic bracelet, prohibition to leave the place of residence, passport seizure, etc.).

Thus, access to the case records turns actually into a separate phase of the proceedings – between the pre-trial and court proceedings – with undetermined actual possibility of the prosecution to perform any legal proceedings that restrict human rights.

2) The new rules for calculating the investigation period when combining and severing proceedings (Article 219 of the CPC) violate the principle of reasonable terms of criminal proceedings. These rules allow the prosecutor to unite or sever proceedings many times with only one purpose – to keep the status of a suspect for months or years, and apply the above measures to that person in order to enforce proceedings and precautionary measures.

3) Conclusion of agreements on recognition of guilt in all types of cases associated with particularly serious crimes, including those involving victims (Article 469 of the CPC), will infringe the right for defense and the rights of victims. This option is not available in European countries. The investigating authorities will be able to improve their performance indicators by forcing suspects to confess, and threatening them with life imprisonment if they refuse. Rapid referral of a case with such agreement to court is fraught with a high risk of pressure on victims to get their permission for the agreement, and neglecting their rights for compensation. Besides, the possibility of concluding agreements in all the proceedings, including especially grave crimes, will make it possible for people suspect of committing terrorist acts to get the opportunity to mitigate their punishment.

4) The transitional provisions of the Law do not stipulate any rules for applying its new principles to currently ongoing criminal proceedings, which violates the principle of legal certainty as a component of the rule of law. In the event of enactment of the Law, a number of issues will remain unresolved, such as the applicability of the rules on access to the materials of proceedings, calculation of the period of investigation, and conclusion of agreements on recognition of guilt in criminal proceedings that began before the Law was adopted and will continue after its entry into force. Such a state of legal uncertainty will apply to hundreds of thousands of suspects, defendants and victims. This fact disproves the statement of the Prosecutor General Yuriy Lutsenko that Law No. 5610 will not affect ordinary Ukrainian.

We should emphasize that these provisions do not apply to criminal proceedings in absentia, which Law No. 5610 is supposed to improve.

Experts of the Reanimation Package of Reforms have already called on the President of Ukraine to veto Law No. 5610.