Reanimation package of reforms > News > Statements > JOINT POSITION OF THE REPRESENTATIVES OF THE CIVIL SOCIETY: E-DECLARATION FOR ACTIVISTS SHALL BE URGENTLY WITHDRAWN AND PROVISIONS CONCERNING THE REPORTING OF CIVIL SOCIETY ORGANIZATIONS SHALL BE REVISED 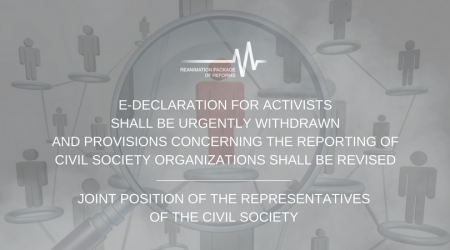 JOINT POSITION OF THE REPRESENTATIVES OF THE CIVIL SOCIETY: E-DECLARATION FOR ACTIVISTS SHALL BE URGENTLY WITHDRAWN AND PROVISIONS CONCERNING THE REPORTING OF CIVIL SOCIETY ORGANIZATIONS SHALL BE REVISED

In the beginning of September, in his appeal to the Parliament of Ukraine on Ukraine’s internal and external situation in 2017, President of Ukraine Petro Poroshenko stated that the introduction of electronic declaration for public activists was a mistake and called on the Parliament to adopt draft laws No. 6674 and No. 6675 which abolish mandatory electronic declaration for participants of any anticorruption activities and introduce additional public reporting for civil society organizations.

This was a reaction to numerous appeals to the authorities to cancel e-declarations for public activists made by leading Ukrainian civil society organizations, the European Union, G7 Ambassadors and other international partners of Ukraine.

At the same time, the above said draft laws introduce discriminatory rules for additional public reporting of civil society organizations and their contractors.

In view of this, we propose two alternative solutions for this issue:

We, representatives of the civil society, are ready to continue cooperation with the Administration of the President and members of Parliament in order to improve legislation on the public reporting of civil society organizations (draft law No. 6675). While supporting the idea of increasing transparency of the non-profit sector, we emphasize that the suggested draft laws contain a number of provisions clearly contradicting national and international law and the Council of Europe standards. These provisions are discriminatory and should thus be withdrawn.

As to the provisions concerning public reporting for civil society organizations, they should be finalized with participation of a wide range of stakeholders and cannot be adopted without due consultations with the public. Meanwhile, civil society’s detailed proposals to draft laws #6674 and #6675 were addressed to the Presidential Administration back on September 6, 2017.

President of Ukraine Petro Poroshenko as the initiator of draft laws No. 6674 and No. 6675 and parliamentary coalition factions (Petro Poroshenko Bloc – Solidarity and the People’s Front), are fully responsible for an urgent repeal of electronic declaration requirements for public activists. Civil society calls for no further delays in correcting this legislative error by abolishing e-declaration for activists by December 31, 2017.

Institute for Development of Regional Press

Center for public monitoring and research

Center for Democracy and Rule of Law