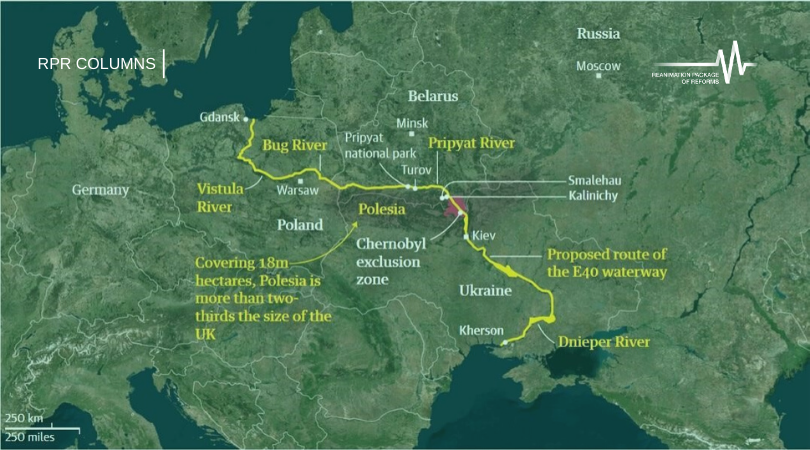 The idea to connect the Baltic and Black Seas through waterways reviving the route existing in the Soviet times was first suggested in 1996 and supported by the United Nations Economic Commission for Europe (UNECE). In 2009, Ukraine joined the multilateral treaty “European Agreement on Main Inland Waterways of International Importance” (AGN) that again underlined the importance of this route.

The E40 waterway project is a great idea from the geopolitical point of view. It connects three countries situated between Central Europe and Russia (Poland, Belarus, and Ukraine) and creates grounds for deeper regional cooperation. However, the economic and environmental sides of the project are not that great.

The E40 project requires USD 13 bn in investments, out of which USD 2 bn are needed for dredging the Vistula River in Poland which is currently not suitable for navigation.

“No waterway standards mentioned in the Polish legal documents are currently met by Vistula, including standards for international routes, not mentioning the missing link from Vistula to the Belarusian border.”1

The EU financed the feasibility study conducted in 2013-2015 but no announcements from potential investors followed. In December 2019, the EBRD answering a request from the Belarusian environmental organization Bahna said that the bank did not take any decision to participate in the E40 waterway project.

According to estimates of Polish experts, the E40 waterway revenues will not be able to cover even its operational costs not to mention the investments.2 So the national governments will have to bear the cost of maintaining the river infrastructure.

But the biggest concern over the E40 waterway is its environmental impact. According to plans, the route will pass through Polissya, a region heavily impacted by the Chornobyl disaster and now a major nature reserve in Eastern Europe.

According to ecological organizations, dredging, straightening the riverbanks, and construction of river ports will have a detrimental effect on the bird population. Moreover, there is a danger that dredging will hit the radioactive layers on the bottom of the Prypiat River and contaminate drinking water for Kyiv and nearby regions. To confirm or reject this danger an impact assessment must be performed.

The European Commission noted that it expects Ukraine to apply the requirements of the strategic and environmental impact assessments (IA) directives and that the E40 Inland Waterway was not included in the Indicative TEN-T Investment Action Plan due to its environmental and economic considerations. As for the Polish component, it will be subject to an appropriate IA on Natura 2000 and in conformity with the Water Framework Directive. Environmental experts in Poland note that “the channel would have devastating consequences for rivers and ecosystems as a whole”.

Considering the lack of investment commitments, the economic inefficiency, and the negative environmental impact, the E40 waterway project appears unlikely to be implemented in the near future.

Currently, Ukraine and Belarus are negotiating another bilateral project that could later become part of the E40 waterway. This project is supposed to give Belarus access to the Black Sea. It involves the construction of a river port in Nizhnie Zhary (Belarus) and dredging a 103 km section of the Prypiat River.

The Belarusian government has already signed an investment agreement with Belport Nizhnie Zhary worth USD 64 million for the construction of the logistics center in Nizhnie Zhary and the Ukrainian government ordered the dredging of Prypiat River worth USD 0.37 million. Overall, Ukraine would have to spend USD 25 million on gateway modernization and dredging. There is a preliminary agreement with Belarus for 1 million tons of goods transit per year.

Ukrainian business is generally skeptical about this project due to uncertainty with the cost of freight and the volume of cargo that the vessels can carry.

Currently, to transport goods by river than by railway. Experts cite different river logistics: some say that the port in Nizhnie Zhary will be able to serve “river/sea” type of vessels, others say that it will serve barges which will then be reloaded onto sea vessels at the Kherson port. In Ukraine, the biggest supporter of the project is Nibulon, one of the largest Ukrainian producers and exporters of agricultural products. The company actively develops its river transportation business and even built a special dredging vessel.

However, all previous objections for E40 stay true for this alternative project. The river port in Nizhnie Zhary will negatively affect conservation areas of international importance and dredging on Prypiat has potential danger of hitting the radioactive layers. The project requires thorough environmental impact assessment and broad public discussion.

Summing up, the E40 waterway construction can pose significant environmental risks and should not even be considered without scientific research of its impact on the environment and people living in the area. Currently there is little prospect of economic benefits from the route that could cover the costs of construction and maintenance and environmental risks.