Reanimation package of reforms > News > Events > Implementation of the Association Agreement is a priority for Ukraine and the EU, – Prime Minister of Ukraine and Minister of Foreign Affairs of Lithuania 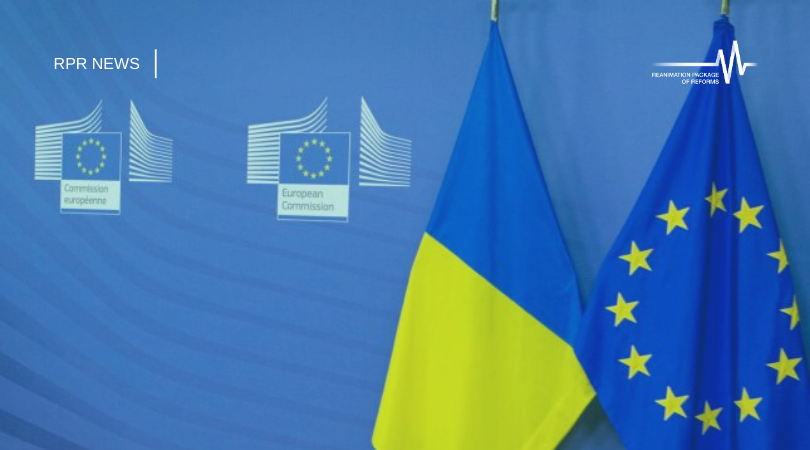 What progress in reforms has Ukraine shown recently? What are the priorities in the relations between Ukraine and the EU? In what areas of reforms should Ukraine accelerate? These and other issues were discussed by participants of the online round table “Ukrainian reforms: what’s next?“, organized by the Chatham House in partnership with the Ministry of Foreign Affairs of the Republic of Lithuania and the Reanimation Package of Reforms Coalition on July 7.

Most countries in the world face two main threats: the coronavirus and the economic crisis it has caused. But there is a third threat for Ukraine – the annexation of Ukrainian territory by Russia and its armed aggression against our country. The Prime Minister of Ukraine Denys Shmyhal spoke about it.

These threats require Ukraine to consolidate internally and cooperate with international partners.

“Over the last month, we have succeeded in this cooperation: the signing of a new program with the IMF, an agreement with the European Union on macro-financial assistance, tranches from the IBRD and three agreements with the EU (including support for small and medium-sized businesses and farmers),” Smyhal gives examples.

“This is corruption in the middle level of the state apparatus and law enforcement agencies, populism of politicians, attacks on the pro-Western vector of development by pro-Russian forces both inside the country and abroad,” the prime minister explained.

He called Ukraine’s future a political and economic movement towards integration with the European Union.

“We are preparing several mutually beneficial initiatives that should take Ukraine-EU relations to a new level. We intend to speed up the implementation of the Association Agreement with the EU as much as possible,” Denys Shmyhal predicts.

According to him, Ukraine’s security is also NATO’s security.

“We are not looking for protection but a partnership. NATO’s recognition of Ukraine as Enhanced Opportunities Partner is a tool for deepening our cooperation with allies in the framework of joint military exercises and information exchange,” the prime minister said.

And to restore the economy of Ukraine in the coronavirus context, the Cabinet of Ministers is implementing the “Economic Stimulation Program”, which consists of 230 measures in all areas.

“The program is designed for three years, for the first month – June – many priority steps have already been taken,” – Shmyhal concludes.

“It’s not easy. We will continue to support Ukraine politically, but at the same time, we have to repeat that reforms must be continued,” the Lithuanian Minister said, adding that progress on this issue depends on the motivation of the Government of Ukraine.

“We can help implement reforms, but we can’t do it instead of the Ukrainian government,” Linkevičius said.

He called the implementation of the Association Agreement a priority in Ukraine-EU relations: “We will focus on economic integration and the approximation of Ukrainian legislation to European legislation in the field of regulatory policy. Ecology is also an important component – Ukraine must become a reliable partner of the EU in the decarbonization of the economy”.

Other essential reforms for implementation in Ukraine are judicial, anti-corruption, and law enforcement reform.

“The recent resignation of NBU Chairman Yakiv Smolii with a statement of political pressure sends a very worrying signal. As well as the criminal prosecution of Petro Poroshenko,” explains the Lithuanian Foreign Minister.

Among Ukraine’s recent positive steps, he called the opening of the agricultural land market and the adoption of a “banking” law.

Linkevičius also spoke about the European Union’s Eastern Partnership program: its implementation is not easy, as it is more of a geopolitical project than an economic or technical one.

“Five out of six Eastern Partnership countries have frozen or active military conflicts. And many of these conflicts because of it’s [European] choice,” the minister emphasizes.

“Sometimes we are accused that we are more Ukrainians than Ukrainians themselves sometimes. I am ready to take this position because what we are trying to do in our discussions is not only about Ukraine but also about our situation,” the head of the Lithuanian Foreign Ministry summed up.

The RPR Coalition coordinated the preparation of two dozen sectoral briefs on Ukraine’s reforms with recommendations to the Parliament and Government. We will present these documents to the Cabinet of Ministers at the end of July. Ihor Burakovskyi, Co-Chairman of the RPR Coalition Board, Chairman of the Board of the Institute for Political Studies and Political Consultations, began his speech with this.

He called on the Government to publicly present the results of the implementation of the Ministry of Internal Affairs’ development strategy until 2020 and to ensure public involvement in the preparation of a new strategic document.

In the national defense and security sector, Burakovskyi called the reform of Ukroboronprom important, as the quality of the Ukrainian army’s equipment depends on it and called on the Parliament to adopt the draft law “On Defense Procurement.”

“The key solution to economic problems will be to attract investment. It is also important to reform the labor market, taking into account the experience of the COVID-19 pandemic,” said the co-chair of the RPR Coalition Board.

The expert added that the decentralization reform should be completed before the local elections on October 25, 2020.

A video of the discussion is available via the link.