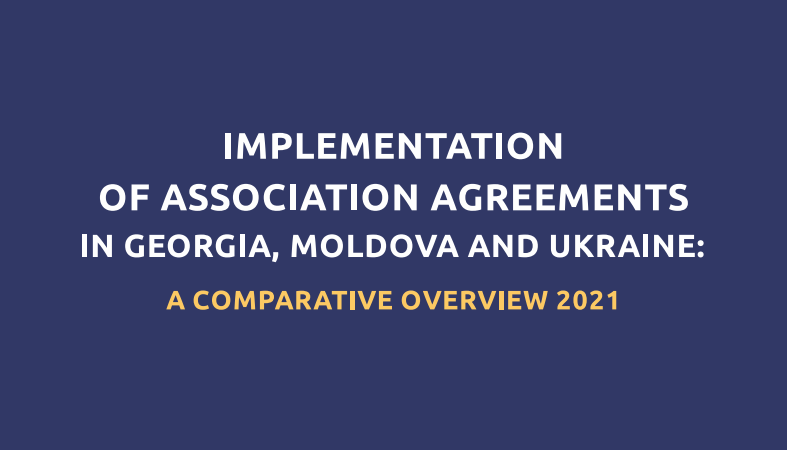 Implementation of Association Agreements in Georgia, Moldova and Ukraine: a comparative overview 2021

In 2014, the European Union concluded Association Agreements with the three countries – Georgia, Moldova, Ukraine, – to promote political association and economic integration, in line with the main goal of the Eastern Partnership as set forth by the Prague Summit Declaration 2009. At the Brussels Eastern Partnership Summit 2017, participants agreed to introduce an enhanced dialogue between the EU and the associated partners on AA/DCFTA implementation. On 13 November 2019, the three countries’ civil society platforms established under the Association Agreement and the Eastern Partnership frameworks presented their Joint Declaration calling on the three governments to establish trilateral cooperation and, on the EU, to institutionalise the enhanced dialogue in the EU+3 format. On 5 December 2019, first joint letter of three Ministers for foreign affairs was presented to the EU High Representative for Foreign and Security Policy calling for an increased sectoral integration and dialogue in EU+3 format. On 17 May 2021, three ministries for foreign affairs signed a Memorandum of understanding on establishing enhanced cooperation on European integration – the “Association Trio”. EU and EaP countries finally decided to carry out the Eastern Partnership Summit in December 2021 which means that the pandemic will no longer postpone the high-level formats of cooperation between EU and the EaP.

This comparative overview of Association Agreements implementation in Georgia, Moldova and Ukraine was prepared in order to facilitate search for common interests of the three countries in cooperation and peer-to-peer learning. It presents the key information to apprehend and compare the content of the three Associated Agreements (AAs); progress in implementation of their main provisions; domestic political contexts, governmental and parliamentary mechanisms of their implementation, and the institutions for civil society participation; as well as the key data on relationship between the EU and the three countries in security and in trade.

This comparative analysis shows important nuances. In general, AA with Ukraine provides for deeper integration, including by offering the perspective of internal market treatment in a number of sectors as well as often more detailed provisions in the Agreement. Only in the Ukrainian government EU issues are coordinated by a dedicated Vice-Prime-Minister and not by Ministry of Foreign Affairs. Georgian and Ukrainian parliaments have separate committees on European integration while in Moldovan parliament a single committee covers both EU and foreign policy issues. The role of respective parliamentary committees in law making varies substantially, but in all three cases, their opinions on legal drafts are not binding. Compliance check tables are required for legal drafts submission by MPs in Georgia and Moldova, but not in Ukraine (though majority of draft laws in Ukrainian parliament are submitted by MPs) which gets the opinion from the Office for European and Euro-Atlantic integration. There are also important nuances in the composition of the bilateral civil society platforms established under the AAs, both from the countries’ and from the EU side. All three countries are working with the EU on updating the Annexes to AAs, with Ukraine being most active.

This publication was prepared by Ivane Chkhikvadze, Iulian Groza and Leonid Litra. Inputs were also made by Veronika Movchan. The initial template was developed by the Civic Synergy Project Team et al.