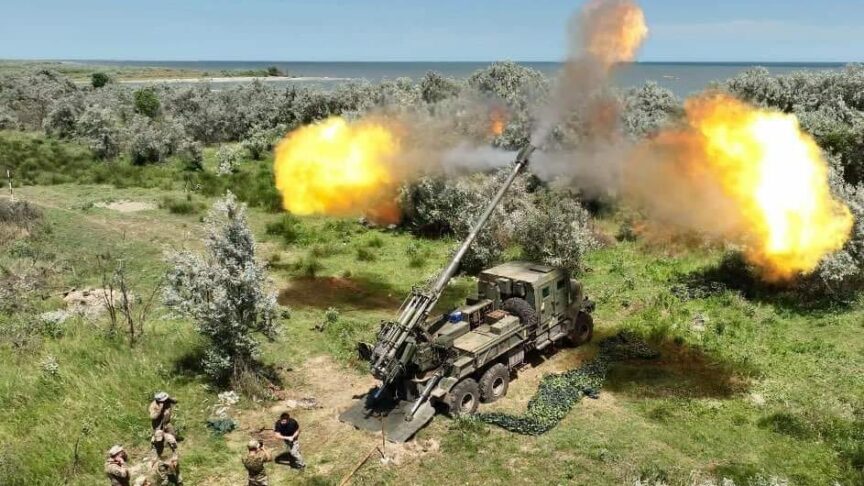 Over the past few weeks, modern heavy Western weapons began to arrive in Ukraine. The deliveries noticeably intensified after NATO member states announced they would send these to Ukraine. The weaponry includes HIMARS multiple rocket launchers, M777 howitzers, PzH 2000 howitzers, Zuzana and Krab self-propelled artillery, and Harpoon anti-ship missiles. The amount of this weaponry is still insufficient to the task of defeating Russia completely. But on the frontlines Ukrainian forces are already making active use of the recent deliveries. And, it appears, the new supplies are starting to swing the balance of military power in Ukraine’s favour.

In fact, the effect was almost immediate: following receipt, the Ukrainian military soon began to hit military targets located at a fairly significant distance. It had rarely managed to do this prior to the arrival of the modern heavy Western weapons. Until recently, most Ukrainian artillery could strike at a distance only of up to 30-40 km. The longest-range weapon – the Tochka-U missile complex – had a range of up to 120 km. However, Ukraine had only up to two dozen Tochka-U complexes in service.

But in the last week alone, in the Luhansk and Donetsk regions Ukraine’s armed forces destroyed two Russian army ammunition depots in occupied Zymohirya, Perevalsk, Snizhne, Popasna, and Donetsk. These cities are approximately 50 km from the front line and sources suggest they were destroyed using HIMARS. Moreover, according to military observers, Ukraine used HIMARS against the Russian air base in the occupied city of Melitopol in the Zaporizhzhia region. The United States’ provision of just four units of this equipment has therefore already enabled the destruction of a substantial part of Russian army logistics in its rear.

The war’s southern front too has witnessed increased tactical success for the Ukrainian army. Kyiv’s forces have recently launched several missile strikes on drilling platforms in the Black Sea captured by Russia in 2014. Russia had placed electronic warfare stations on these platforms, enabling it to control the air space in parts of the Odesa region. This equipment has most likely now been destroyed, and the Russians will no longer be able to carry on their illegal extraction of Ukrainian gas from the platforms. A few days later, Ukrainian troops launched artillery and missile strikes on the Russian garrison on Zmiiny (Snake) Island. Shortly afterwards, the Russian troops were forced to leave the island.

All these targets in the Black Sea are within a radius of up to 100 km of the Ukrainian coast. The Ukrainian government has not yet specified what kind of weapon was used for the attacks on Snake Island and the Black Sea drilling platforms. But it can be assumed that Ukraine’s forces employed HIMARS or Harpoon anti-ship missiles. On both fronts, the Ukrainian army’s recent tangible tactical successes strongly suggest a relationship with the delivery of modern heavy Western weapons.

However, although the list of weapons delivered is vast and highly in demand among the Ukrainian military, their quantity is still insufficient to obtain a strategic advantage. For example, Ukraine has so far received only 12 PzH 2000 self-propelled guns, 8 Zuzana self-propelled guns, and 4 HIMARS systems. Their small numbers mean that Ukraine has not yet built up operative momentum towards, for example, decisive victories in the Kherson or Kharkiv axes. A sufficient number of modern Western weapons could enable this.

In mid-June, a senior presidential adviser shared his estimates of Ukraine’s needs: “1000 howitzers caliber 155 mm; 300 Multiple Launch Rocket Systems (MLRS); 500 tanks; 2000 armoured vehicles; 1000 drones.” In addition to this, Ukraine will also require at least two dozen modern fighter jets, ideally, American F-15 or F-18 or Swedish Gripen to match Russia’s air power, as well as to provide additional protection from Russian missiles. This could be in train: the appropriate bill has already been announced by US congressman Adam Kinzinger. Congress should pass this as soon as possible, as Ukrainian pilots will require months of training before being able to use these.

Finally, recent missile strikes in Kyiv, a strike on a shopping mall in Kremenchuk, and daily attacks on other Ukrainian cities demonstrate the urgency of protecting Ukrainian skies. The US government has confirmed its intention to send two modern anti-aircraft missile systems, NASAMS. This would be a huge step forward to protect Ukraine’s cities and strategic facilities from the enemy missiles, since NASAMS is able to shoot down planes, helicopters, and cruise missiles such as Iskander or Tochka-U. It can also hit targets at a distance of 160 km. Since NASAMS batteries can cover only one city or an object, it is important to combine them with alternative modern air defence systems pledged by other Western partners, including older SAMs and aircraft. These can help to close the gaps in Ukraine’s air defence.

Ukraine has demonstrated its ability to use modern Western weapons in combat to great effect. Its armed forces have shown that they can learn quickly how to operate them. Should the West consistently supply Ukraine with weapons and armour, the Ukrainian army will be able to use these to mount a counter-offensive on multiple fronts and push the Russians out of its territory. Besides the unprecedented support already given to Ukraine, further success will also require the West to be even swifter and yet more decisive to secure what would be a victory not just for Ukraine – but for the whole democratic world. If the West is advocating a quick win for Ukraine, it should urgently intensify its supply of weapons to the country.