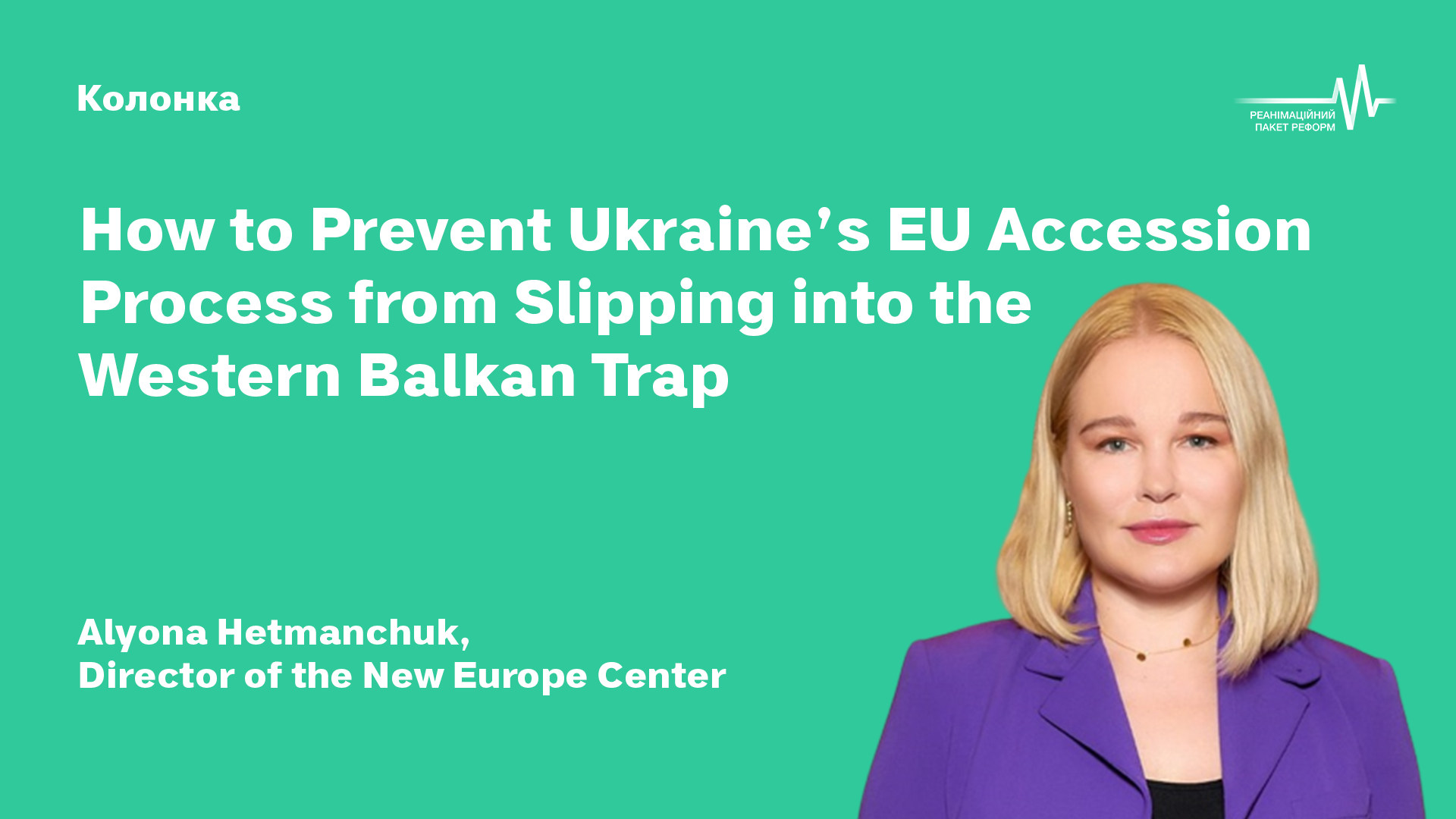 After the EU granted Ukraine candidate status one might think that the ball is exclusively in Ukraine’s court, who now should deliver in order to confirm to European member states that candidacy was right and timely and not a premature decision. But the reality is that the ball is also in the EU’s court. In Ukraine’s accession process much depends on whether the EU will be ready to reassess its own enlargement approach and not let Ukraine slip into the Western Balkans trap of endless negotiations without getting closer to EU membership. The EU and Ukraine can do this by adding elements of integration on the way, which on the one hand deliver practical results, and on the other reinforce the accession process.

Following the EU Council decision in late June, Ukraine has already proved that it is serious about the EU candidacy despite being under an unprecedented military attack – the greatest since World War II – and waging an existential war. The country showed this by immediately starting to implement the seven recommendations which accompanied the candidacy decision and cover major reform areas needed for Ukraine’s successful integration into the EU in accordance with the Copenhagen criteria. The Ukrainian Government mobilized all resources in order to meet these sectoral recommendations already this year. According to Ukraine’s Deputy Prime Minister on European and Euroatlantic integration Olga Stefanishyna, the majority of the job is expected to be done till the end of October this year. And according to the ‘Candidate check’ – an independent monitoring initiated by the New Europe Center think tank in a coalition with major NGOs assessing reforms – by mid-August Ukraine had already demonstrated visible progress on a number of recommendations.

Based on expert surveys, Candidate check gave the Ukrainian Government’s efforts a score of 4,3 points out of 10. The most striking results were demonstrated on the anticorruption chapter with the final appointment of the independent head of the Specialized Anti-Corruption Prosecutor’s office (SAP). Some important positive developments also took place in another crucial reform area, namely the judiciary. As an example, the Ukrainian Parliament elected two new professional and independent members of the High Council of Justice – the main institution which along with the High Qualification Commission of Judges of Ukraine (HQCJ) will have to recruit at least 3000 Ukrainian judges and complete the qualification assessment of the acting judges, which eventually would lead to the establishment of an independent judiciary in Ukraine. The poorest results were achieved with regards to the recommendation on reforming the Constitutional Court where four new judges had been appointed despite the Venice Commission conclusion.

Nevertheless, Ukraine’s performance in implementing the seven EU recommendations proved what Ukraine’s civil society and experts had been advocating long before the historical EU summit in June – candidacy is going to be an important boost for reform progress in Ukraine. Ukraine’s determination to implement the seven recommendations also serves as evidence that Ukraine is able to stick to the reform agenda while waging a full-scale war and operating under martial law.

By showing a clear commitment to implement the recommendations, Ukraine’s Government is also proving that it is not willing to be stuck long-term at the current phase – just enjoying a status of candidate country without any practical benefits and without getting closer to EU membership. Even if the seven recommendations were developed by the EU more as post-conditions for candidacy, in Ukraine they are perceived also as preconditions for opening accession talks. Moreover, as the Western Balkans experience clearly proved, even opening accession talks doesn’t guarantee that a candidate country moves closer to EU membership.

In Ukraine there is a strong belief that the accession process should be merit-based. If there is progress in reforms, there should be progress in accession. Unfortunately, in the case of the Western Balkans we don’t see that. Moreover, there is a paradoxical situation where countries who are performing better have not even started accession talks yet. As the European Commission Assessment reports clearly show, North Macedonia, which has been waiting to open accession talks since 2009, is as prepared today to join the EU as Serbia, which has been negotiating since 2014, and almost as prepared as Montenegro, which has been negotiating for 10 years already. Albania, which has not started talks yet due to being placed in one box with North Macedonia, is not far behind.

Therefore it is important for Ukraine to move in two parallel tracks towards the same finalité. The first one is to make sure that the EU does not shelve the start of accession talks with Ukraine by referring to the need of internal EU reform or other more urgent issues. The decision on starting accession talks by itself would be another huge boost for reforms in Ukraine and a source of inspiration for reform-minded politicians and the civil society.

But we also need something meaningful which will not depend on internal EU reform as well as to help us avoid the Western Balkans trap of endless negotiations. And probably most importantly, we need something that would be visible in practical terms for the Ukrainian people and would serve as a clear indicator for them that Ukraine indeed is moving towards full-fledged EU membership. The Ukrainian people, who are expressing record high support for EU membership (around 91%), must not become hostages of the same enlargement policy applied to the Western Balkan states. Instead, they should start enjoying benefits from the country’s candidate status even before Ukraine would be able to close all accession chapters.

What exactly do we propose? We propose that the EU Council, ideally during the Czech EU Presidency or at the beginning of the Swedish EU Presidency, adopts a decision that locks in the prospect of fully joining the EU Single Market and Four Freedoms for Ukraine and other candidate states, irrespective of the status of negotiations and closing of chapters. The process of full accession to the EU Single Market should be merit based. The evaluation of merit and readiness shall be carried out by the EU Commission, which will issue an Assessment report similar to the ones that are issued in the case of the Western Balkans. If the Commission assessment gives the “mark 2 or 1”, that would be enough to consider Ukraine as being in line with the regulations and able to join the Single Market. In this respect, we propose the following text of the Council decision: “EU candidate states are able to fully join the EU Single Market and Four Freedoms irrespective of the status of negotiations. The EU member states are committing to endorse the full integration of the candidate states if these are positively assessed by the Commission”.

The possibility of a merit-based prospect of full integration into the Single Market and Four Freedoms will avoid accession fatigue on both sides. It would also make reforms more dynamic and better coordinated and would allow continuing the integration of the candidate states in parallel with the reform of the EU, thereby making the process rely on merits and safeguard it from political turbulence. Thus, what we need now is a firm commitment from the EU to give the Four Freedoms to Ukraine once Ukraine is ready.

In Ukraine’s case joining the Single Market and Four Freedoms is not something that will have to be done from scratch. Even before Ukraine was granted EU candidacy, it had already implemented 63% of its Association Agreement with the EU, which already envisages in its Deep and Comprehensive Free Trade Agreement (DCFTA) access to selected sectors of the European Single Market. Even being under war conditions unequalled since World War II, Ukraine managed to become part of the common electricity market by joining ENTSO-E.

Furthermore, some elements of the Four Freedoms have already been applied to Ukraine on temporary basis after the large-scale invasion started. What is now needed is to expand and lock this in on a permanent basis when Ukraine is ready. Interestingly, the unprecedented flow of millions of Ukrainian refugees into the EU – some 4 million Ukrainian citizens have applied for temporary protection – has not caused any significant labour market problems. Contrary, many of Ukrainian citizens, who are now living in EU Member States, have successfully found jobs and their employment is positively perceived by locals. Existing tariffs and trade quotas have been cancelled by the EU. The liberalization of transportation took place in response to the disrupted supply chains. So, Ukraine is slowly and quite naturally moving into the European Single Market and Four Freedoms direction anyway.

Clear political commitment from the EU side that Ukraine will join the Single Market and Four Freedoms irrespective of the EU reform process will also play an important role in the post-war reconstruction process in Ukraine and its economic recovery. According to some estimates, the GDP of member countries inside the European Single Market is on average 9% higher than it would be if the various tariff and non-tariff restrictions were in place. It would also foster investments in Ukraine by sending a clear signal to investors that the integration into the Single Market is achievable.

In the past, Sweden along with Finland and Austria navigated their EU accession successfully through participating in the European Economic Area (EEA). The same could happen to Ukraine if the EU would commit to engage with Ukraine, and probably also Moldova, on two parallel tracks – opening accession talks while allowing Ukraine to join the European Single Market and Four Freedoms as soon as Ukraine is ready, regardless of the state of accession talks and progress made with regard to internal EU reform.

-Ukraine needs to enjoy practical benefits of the EU accession process before all chapters will be completed. The EU Council, ideally during the Czech EU Presidency or at the beginning of the Swedish EU Presidency, should adopt a decision that locks in the prospect of fully joining the EU Single Market and Four Freedoms for Ukraine, irrespective of the status of negotiations and chapters closed.

– The process of full accession to the EU Single Market should be merit based. The evaluation of merit and readiness would be carried out by the EU Commission which would issue an Assessment report similar to the ones that are issued in the case of the Western Balkans.

Alyona Getmanchuk, Director of the New Europe Center, for SCEEUS