Reanimation package of reforms > News > Columns > How it is possible to amend the constitution with the provision, that no one is going to bring into life? 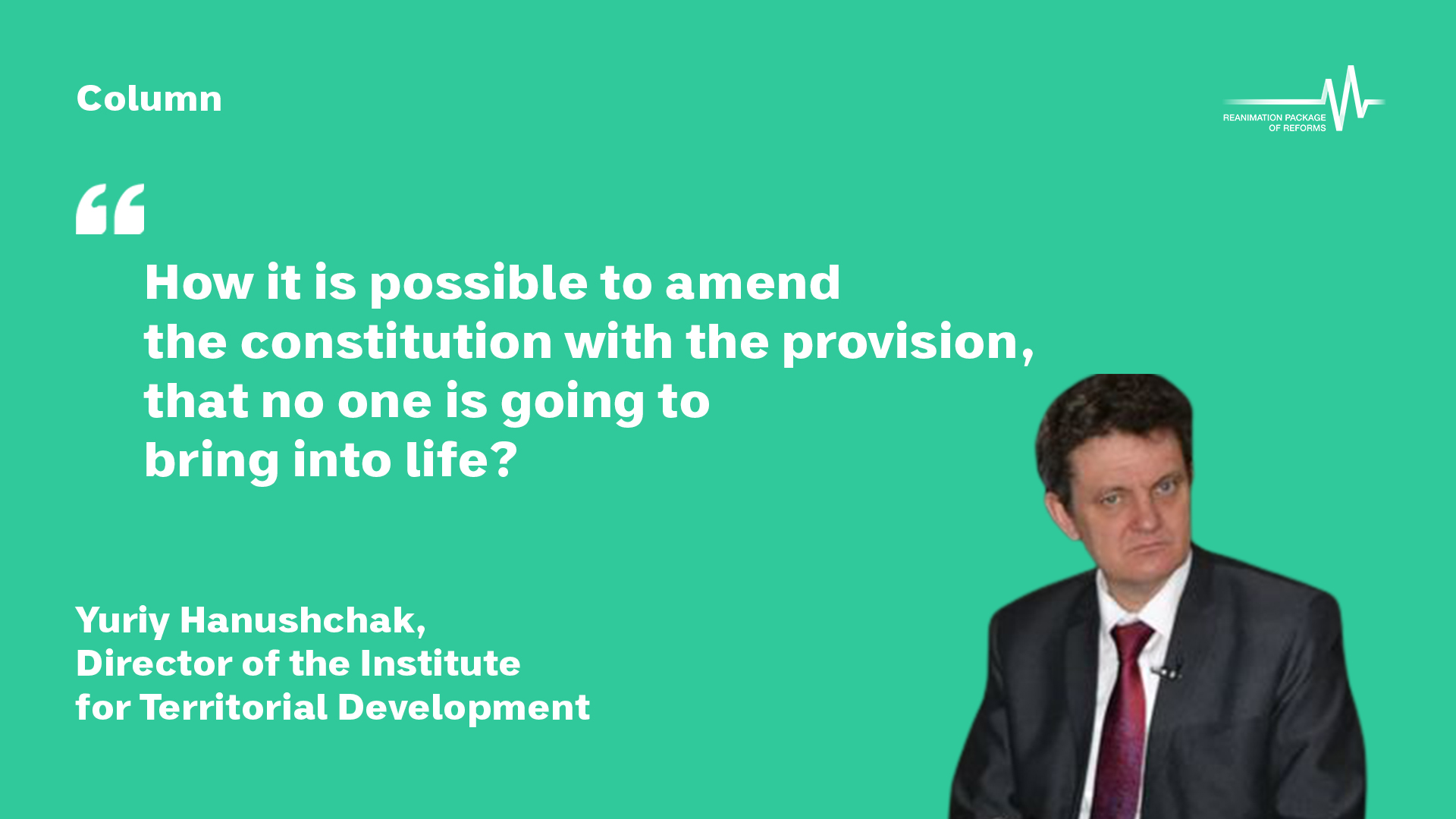 How it is possible to amend the constitution with the provision, that no one is going to bring into life?

The events unfolding in the depths of public administration reform cannot but be alarming. Simultaneously with the appearance of the weakened draft law  №4298  on local state administrations, which ZN.UA wrote about in detail  last week, a draft amendment to the Constitution regarding decentralization appeared.

The G7 ambassadors immediately gave a round of applause for the decentralization and project of changes (apparently for external consumption) that obscures real government policies. Because this week, contrary to the idea approved in the first reading, a bill will be voted on, which will make the head of the local state administration completely under the control of the president. This political betting game could be ignored. However, it is obvious that decentralization must be enshrined in the Constitution.  For various reasons (including the war and Putin’s demands), the necessary changes to the Constitution were not made at the start. Therefore, a political decision was made: first the reform, then – its enshrinement in the Constitution.

However, what is offered to us today can hardly be called the implementation of this formula. If only because the bill №4298 contradicts the published model of amendments to the Constitution. How can the Constitution enshrine what they are not really going to do?

However, despite the existence of a number of reform norms, the published draft amendments to the Constitution also seem to be a rather ambiguous document.  And that’s why.

This time (this is the third variant) changes to the Constitution in terms of reforming local self-government and territorial organization of power arose out of nowhere. Unlike previous drafts submitted officially on behalf of the head of state and revoked by him, the author of the text is not announced here. If approved, it will allow all those who declare their authorship in time and loudly to reap the fruits of glory, and if not – there will be no culprits in defeat.

And although it is claimed that the document is not a decision of the authorities, but only a pretext for the beginning of the discussion, it  is unlikely that Bankova would have allowed this document to appear in public if it had not associated her goal with it.

Moreover, the feature of this attempt is the widely advertised inclusiveness of the text development process . Hundreds of discussions in the country, dozens of online discussions with those who are called by the buzzword “stakeholders”, should create the illusion that everything has been agreed and alternative positions should not be considered, as they were democratically rejected by most representatives of the same centers impact. However, there was one small gap in this inclusiveness – deputies of city, village, settlement councils were not involved in the discussion from local self-government bodies, but only heads of cities, villages and settlement. Which could not help but affect the text of constitutional changes that strengthen authoritarianism at the local level. As a mirror image of the strengthening of authoritarianism at the central level.

If, according to the current Law, the current mayor, village, settlement heads, heads of the executive body of the council to which he is subordinated and accountable, it is further proposed to make it the body itself, ie to remove from control the representative body of the community. He will be responsible only to a community that sounds beautiful, but in reality such responsibility can be realized only in elections. And in order to make it very difficult (or even impossible) to replace the head, the term of office of local self-government bodies  is set at  five years. This term actually exceeds even the average term of parliament, which can be dissolved by the head of state ahead of schedule, which has been observed many times. By the way, two thirds of the EU countries have set the term of office of local governments at four years, which is quite enough to implement the election program of the mayor and council. And as a control shot to stifle the front in its infancy, the Constitution preserves the construction according to which the head of the community conducts meetings of the council – a body of which he is not a member.  Absolute monarchy in isolated communities with power that even the president, who is at least not the speaker of parliament and nominally does not head the government, does not have.

The head of state was not forgotten in the amendments to the Constitution either.  He was modestly instructed to apply to the Constitutional Court if there was a suspicion that the decision of the local self-government body violated the territorial integrity of the country. And the CCU, whose mission is to verify government laws and acts for compliance with the Basic Law, will have to deal with individual violations of the law at the local level, which could be done by the district administrative court. However, in this case the act of local self-government is stopped by the president. And it is possible that he will use this rule for political purposes quite intensively .

After all, the president has no responsibility – he simply suspends the activities of local self-government bodies until the decision of the Constitutional Court, which due to the heavy workload will not be able to resolve such disputes within the one-month deadline set by the Constitution.

A great way to torture the CCU. By the way, Bill №4298, which outlines the procedure for administrative supervision over the legality of local government acts, already offers a recipe for resolving such cases – by filing a head of state administration in court in compliance with the constitutional norm to suspend this act. Maybe, after all, to work out these problems in the field of regulation by law, and not bring them to the constitutional level?

The creation of its own executive bodies at the oblast level increases the threats of creeping separatism.  And they do not have an adequate counterweight in the amendments to the Constitution. What could be the lack of a list of areas in the Constitution. In general, the existence of such a rule in the Basic Law is surprising. It is a sign of the federal states. And a constant temptation for the Kremlin to raise the issue of federalization, based on objective traces in the Ukrainian Constitution. It is no coincidence that Putin is in no hurry to create one “people’s republic” in the occupied territories of Donetsk and Luhansk oblasts instead of two. Because then the slogan on the battle flags of the “non-republics” about the conquest of the entire territory of Donetsk and Luhansk regions, “temporarily occupied by the Kiev junta”, loses its meaning.

The creation of separate regions in the controlled territory, in particular Mariupol, would be a serious blow to the ambitions of the self-proclaimed leaders of the ORDLO . And the solution to the issue of creating regional councils in these territories, because the current practice of spending public funds by the MCA contradicts the principles of democracy.

In the section on  describing the organization of executive power at the territorial level, the authors of the project decided to propose different options for appointing the head of the executive body of general competence – the prefect . According to one of them, the prefect is appointed only by the Cabinet of Ministers, according to another – the current procedure is maintained: the president at the request of the government. In the first case, the prefect is accountable and controlled only by the government, in the second – a servant of the two masters.  The optimal scheme is the one envisaged for the appointment of judges: in it the functions of the head of state are limited only to the approval of the candidacy proposed by the High Council of Justice.. This would be an additional guarantee of the political neutrality of the prefect. However, knowing the president’s habit, or rather his entourage, regardless of his last name, to expand the powers of the head of state, even if they are not mentioned in the Constitution, it is doubtful that he would simply sanctify the candidacy proposed by the government. In the Ukrainian reality, he will reject the proposals of even the most professional candidates for prefects, preferring personally devoted, albeit ignorant.

The right, or rather the obligation to decide the existence of councils at the subregional level, which the authors of the project finally dared to call the county, is also given to legislators. At the same time, the current version of the Constitution remains holds an euphemism for “county / regional councils representing and realizing the common interests of county / regional communities.” Instead of saying outright that self-government bodies are being established at the county / oblast level, whose powers are determined by law, applying the principle of subsidiarity.

It is unclear the logic in applying the same term “community” both to the proper name of the basic level of administrative-territorial organization and to define the primary subject of local self-government: residents living in the same community. If there is already enough courage to introduce the term “county”, then another term could be proposed to describe the basic level of administrative structure, such as “municipality”.  And if there is a lack of courage, the current term “territorial community” could be left for the same residents. To avoid confusion in the future around deadlines and the need to apply to the Constitutional Court for a formal interpretation.

The revolutionary formula, borrowed from the European Charter of Local Self-Government, that the community “freely resolves within the law issues of local importance that are not excluded from its competence and the solution of which is not entrusted to any other body” should be agreed with Article 19 Constitution, according to which local governments are obliged to act only on the basis, within the powers and in the manner prescribed by the Constitution and laws of Ukraine. Again, the sphere of competence of the community should be outlined directly in the Constitution, as there is no reference to the law in the above wording.

And these are just the problems that lie on the surface. Which already cause a lot of unexpected remarks and misreadings. Although, fortunately, the deadly “European” rule on the legal status of communities during the war did not fit into the project this time.

In general, a number of legal inaccuracies and ambiguities in the draft indicate the negligence of its anonymous authors, which raises doubts about the desire to adopt amendments to the Basic Law in the proposed version.  These doubts are exacerbated by recent amendments to the draft law on local state administrations, which translates heads of local state administrations from the status of civil servants to the status of political figures. If the desire to reform the executive branch at the territorial level as soon as possible were truly sincere, they would be put into practice even now, even before it was officially enshrined in the Constitution.

Because it seems that such a draft amendment to the Constitution is a ritual step, which is done primarily for political purposes. As an indication that the window of opportunity for reform is closing, the election campaign is beginning.

Yuriy Hanushchak, Director of the Institute for Territorial Development, author and co-author of a number of bills on local government reform, budget and public procurement