Reanimation package of reforms > News > How do we build effective Government in Ukraine? 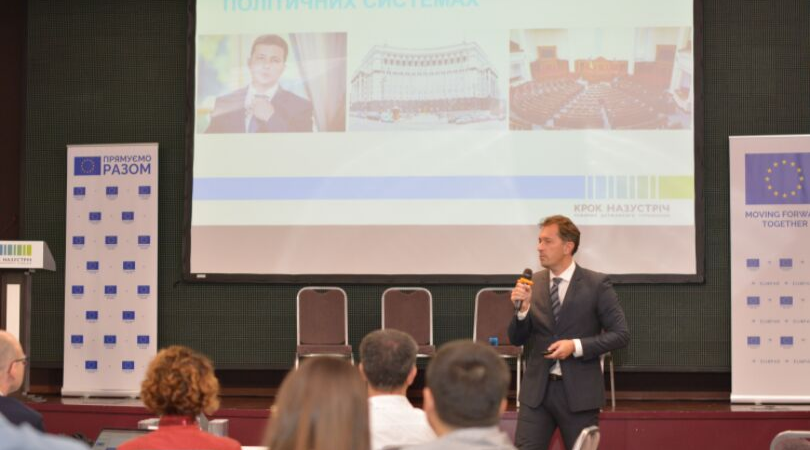 How do we build effective Government in Ukraine?

The recent presidential and parliamentary elections have demonstrated the desire of Ukrainians to change approaches to governing the state. The new parliament will form the government in early September. Most MPs are in favor of a dramatic change in the work of the government. The need for major transformations in public administration is supported by Ukrainian and European experts and international partners. But they stress that it is not enough to replace people to change the old inefficient government system. Much more depends on changes in government architecture, rules of interaction and procedures for government and civil servants.

It is for this purpose that Ukrainian experts have developed a draft law on the Cabinet of Ministers and the Central Executive Bodies, which will help form an effective government under the new principles. This will help to clearly identify policy areas and the optimal number of ministries, reduce the number of government members and deputy ministers, and clearly define their functions.

New approaches to government work, in particular, provide for transparent decision-making, ranging from engaging key stakeholders and citizens into the discussion of problems and options to resolve them to the early promulgation of draft acts submitted to the government. This will close the Government meeting and ensure an open discussion by ministers for quick and high-quality decision-making.

In addition, the draft law obliges members of the Cabinet of Ministers to coordinate not only their actions, but also government communication – to constantly inform the society about their activities and to present a common position in public speeches.

As the Chairman of the Board of the Centre of Policy and Legal Reform, Ihor Koliushko, noted: “The task of the reform is to make the Government politically accountable to the parliamentary majority and the President, but organizationally and operationally autonomous in fulfilling its mission – to work for the people, to solve problems and to take initiative, to promote the successful development of the country and to improve the standard of living of its citizens.”

“As international experience shows, the high-quality, harmonious and accountable work of the entire government in constant cooperation with the parliament is far more important and effective than the number of ministries or ministers,” stressed Ivan Khilobok, Leader of the Public Administration Reform Team at the CMU Reforms Delivery Office.

“The existing state mechanism is capable of implementing 50% of the approved plans at best. While more than 4,000 decisions are adopted at government meetings a year, the government is the author of only about 30% of the country’s legislative decisions, compared to European practice of 70-90% of the laws proposed through the government. At the same time, a mere 33% of businesses in Ukraine rate legislative initiatives as well-written, not controversial, and not changed too often. Therefore, much effort is needed to improve the performance of the Government and to bring it closer to EU standards. The ability of governments in EU Member States to generate so many legislative initiatives is explained by the availability of much greater analytical resources and effective procedures in the Government. The use of a broader set of analytical tools and mechanisms of open consultation enables us to generate better legislative decisions.

Therefore, the parliaments of most EU Member States rely on the Government’s ability to draft laws. According to this practice, the Cabinet of Ministers should become the center of lawmaking, develop high-quality policies and decisions using all available resources,” stressed EU4PAR EU Project Manager Ugis Sics.

“Most European models are based on similar fundamental principles. Recommendations for Ukraine, based on the experience of EU Member States, are as follows: a strong role of the Prime Minister; a strong center of Government – the CMU Secretariat, headed by a member of the CMU; no more than three Vice Prime Ministers with clearly specified powers; simplification of the system for reorganizing and liquidating the Ministries and reduction of their number to 14-15; a clear division of responsibilities and areas of competence of the Government with a separate CMU member responsible for horizontal issues (civil service, e-governance, administrative services) and a separate one for he purpose of coordinating European integration issues. All this is foreseen by the draft Law on the CMU and the central executive bodies. The new CMU law is needed as soon as possible to strengthen the capacity of the new Government,” emphasized the key EU4PAR expert and former Slovenian Minister of Public Administration Gregor Virant.

“It is particularly important that a qualitatively new government system be the focus of the politicians who will form the new government. But more important is the unity, trust and respect for the rule of law. It is excessive concentration and centralization of powers, illegal methods of activity that can become the biggest enemies of the public policy effectiveness, and thus, foil the expectations of voters for accelerated development of the country,” noted Ihor Koliushko.

* The event was organized by the EU4PAR project “Support to Comprehensive Reform of Public Administration in Ukraine” jointly with the Public Association “Reanimation Package of Reforms Coalition”, Centre of Policy and Legal Reform, and Reforms Delivery Office of the Cabinet of Ministers of Ukraine.