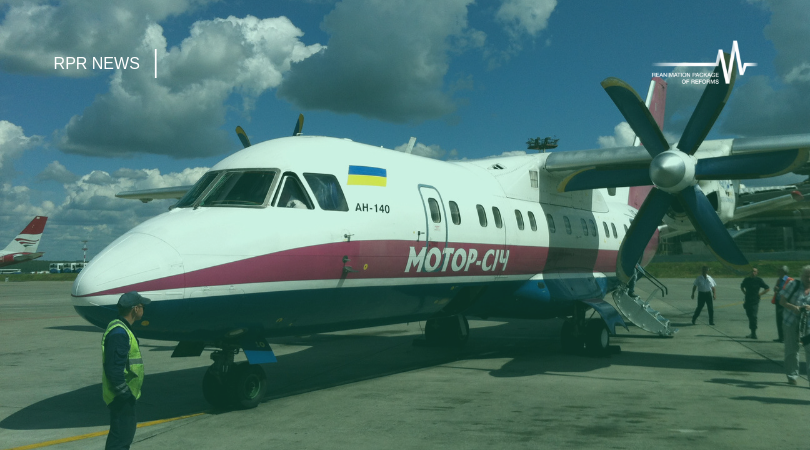 Independence Day celebrations in the office of the new president, Volodymyr Zelenskyi, were somewhat overshadowed by a “greeting” from the Donald Trump administration sent through The Wall Street Journal.

A major US newspaper reported that National Security Advisor of the United States John Bolton is to come to Kyiv. And the aim of his visit is not to once again express support for the Ukrainian people. He has a more pragmatic goal: to dissuade the main owner of Motor Sich Viacheslav Bohuslaiev to sell the company to the Chinese holding Beijing Skyrizon Aviation.

In Kyiv, an adviser to the US president confirmed that he would try to convince the Ukrainian authorities of the danger of cooperating with the Chinese, but refused to comment on issues related to Motor Sich.

“”Ukraine will make its own decision, but perhaps Ukraine will find a better choice that will have better economic consequences for its citizens,” he vaguely explained.

Bolton reminded that the United States, like Ukraine, has a system for approving military technology-related contracts, which goes beyond the principle that contracts that threaten national security are blocked.

The arrival of the American guest caused a great stir in the Ukrainian media. However, mostly discussions were reduced to the trivial: the US defends its own interests in competition with China. As if nothing seems to threaten Kyiv’s national interests… It does, big time!

There are facts that indicate that they are looking forward to the sale of Motor Sich in the Kremlin.

Back in 2015, Viacheslav Bohuslaiev signed a memorandum of cooperation with the Chinese holding Beijing Skyrizon Aviation Industry Investment Co Ltd to establish an aircraft engine manufacturing plant in Chongqing.

According to the arrangements, Ukrainian technologies and some of the Motor Sich specialists were to transfer to the People’s Republic of China.

During 2016, an agreement was signed with the Chinese side on the sale of a controlling stake by Bohuslaiev’s structures. Back then, the contract was blocked by the Security Service of Ukraine (SSU), which initiated criminal proceedings under the article “Sabotage” of the Criminal Code.

Antimonopoly Committee experts have informed the SSU about signs of economic competition violations. Motor Sich allegedly did not ask for permission to sell a controlling stake in the only aircraft engine manufacturer in the country.

The Marlin Project received secret analytical findings from the lawyers of the Ukroboronprom, which were prepared during drawing up the Chinese agreement.

Between the lines of this document, we can trace back the history of the decline in the aviation industry in Ukraine and the main risks to the national security of our country.

Viacheslav Bohuslaiev. 80 years old. A classic “red director” who has worked in various positions at the Motor Sich enterprises since the 1960s.

In the 1990s, after galloping privatization, he became the owner and director of the aircraft plant. Since 2006, he has been regularly elected to Ukrainian Parliament. He was a member of the Party of Regions.

In the last election, he lost the majority district to a young wedding photographer from the Servant of the People Party, which hit the headlines.

According to the analytical findings of the Ukroboronprom concern, which were submitted to the National Security and Defense Council during Petro Poroshenko’s presidency, 80% of the helicopters produced in the Russian Federation are equipped with motors with the Motor Sich tag. Including the pride of the Russian aviation industry, Mil Mi-28 “Havoc”.

It is no wonder, then, that historically Ukrainian enterprise has been focusing on the eastern market. Recently, it became known that Bohuslaiev’s Motor Sich continues to supply parts to the military of the Russian Federation, and also works in certain areas of Donetsk oblast out of Ukraine’s control and occupied Crimea. But besides chronic external dependence on the Russian Federation, PJSC Motor Sich has another one – the internal one. Production at the private plant of Bohuslaiev will stop without design documentation and engine patents from the state design bureau “Ivchenko-Prohres”.

The latter is part of the Ukroboronprom concern. It is a unique enterprise in the world that specializes in the design, manufacture, certification and production of gas turbine aircraft and other engines.

According to the Ukroboronprom lawyers, the interdependence of private and state-owned enterprises played “Old Harry” with the latter. Ukraine failed to protect its own interests against the aggressive behavior of businessman Bohuslaiev.

Since 2005, an agreement has been in place between Motor Sich and Ivchenko-Prohres, according to which Bohuslaiev’s company received design and operational documentation for a range of engines for airplanes and helicopters, including those under Russian tricolor, free of charge for 60 years.

What does this mean in practice?

Last year, the head of Rostec Aircraft Cluster, Anatolii Serdiukov, let it slip out that Avicopter would install Motor Sich engines on the Chinese-Russian heavy helicopter Advanced Heavy Lift, at the insistence of another Chinese company.

We are talking about the AI-136T engine, which was developed by Ivchenko-Prohres SE and handed over to the Bohuslaiev’s private company for use. Actually, it is the results of Ivchenko-Prohres and Motors Sich cooperation that make Ukraine one of the high-tech states in the aviation sphere. Is it worth saying that Beijing does not mind pushing Kyiv out of the markets that the latter inherited from the Soviet Union?

A few years ago, some disappointing conclusions were reached by Ukroboronprom as well. If Motor Sich moves production to China, and with them technologies that are jointly owned with Ivchenko, Ukraine will no longer have anything to enter the international helicopter market.

An excerpt from the analytical findings of Ukroboronprom’s lawyers

It is necessary to mention the role of the management of the State Enterprise “Ivchenko-Prohres”, which was supposed to protect the state interests in public offices.

In the analytical findings for the SSU for 2016, the Ukroboronprom lawyers noted the personal financial interest of 17 Ivchenko managers, led by director Ihor Kravchenko, who are shareholders of… Motor Sich JSC, from which they receive dividends.

In June, it became clear what steps the Ukrainian authorities had taken to protect their national interests. An unspecified government source said that Ukroboronprom was a third party to the agreement between Skyrizon and Motor Sich.

There is an agreement between the Chinese investor and the government. According to it, the Chinese will receive 50% of Sich shares and the state represented by Ukroboronprom will receive 25% of Sich shares. Theoretically, this will allow the Ukrainian authorities to influence decision-making by Motor Sich management after the sale.

In addition, the Chinese side will contribute $ 100 million, or 2.8 billion UAH to the national budget of Ukraine. These funds will be spent to support aviation public enterprises.

According to Ukroboronprom’s plan, Ivchenko should receive half the amount for development. This is 1.4 billion UAH. Antonov, flagship aircraft plant, is expected to receive 800 million UAH. And Kharkiv State Aviation Production Enterprise is to receive 370 million. Moreover, several much smaller transactions are foreseen for other plants that are part of the concern.

In 2016, Motor Sich JSC itself received $ 100 million. This is preferential credit financing at 0.3% per annum. The repayment period is 10 years.

Meanwhile, construction of a $ 3 billion assembly plant began in Chongqing.

In fact, the three parties are awaiting the final approval by the Antimonopoly Committee, after which the agreement will be considered closed.

First, did the Ukrainian authorities have any alternative to the 25 percent?

And secondly, if the AMCU approves the agreement, what are the guarantees that the Chinese side will not take possession of Ivchenko-Prohres technology?

Answers to these questions should be prepared ASAP by the Office of the new President Volodymyr Zelenskyi. And it is unlikely that the United States, as a key military partner, will be satisfied with the standard excuses for the negligence of predecessors. After all, for today’s America, the Chinese question is a priority one.

The Communist leadership of the People’s Republic of China wants to gain the status of the first country in the world, including in terms of military parameters. The Chinese are seeking to establish their own modern production of attack helicopters. And here Ukrainian engines come in handy.

Russia is also happy about such a scenario. Since it has been cooperating with China in the field of defense industry for a long time.

Regarding alternative solutions, former authorities had a few.

For example, start the process of re-privatization of Motor Sich JSC with reasonable compensation for damages to Viacheslav Bohuslaiev.

Or load the JSC with the state order to the fullest extent, so that they stop looking for third-party partners. Finally, this year alone the government budgeted 4.4 billion UAH to purchase used French Airbus helicopters for the police.

And law enforcement agencies could work on confiscation sentences.

Many criminal cases have been opened against the management of Motor Sich, including the alleged financing of terrorism in Donbas. Only those cases do not get to court hearings.

Chinese political culture is filled with symbols. If we use them to describe the situation around Motor Sich, China looks like a dragon hiding to make the last jump. USA is a predatory eagle flying for prey. And Ukraine… looks like a carefree pig in its trough.

For years, Bohuslaiev have been using parliamentary influence for his own gain. Motor Sich actively cooperated with Russia, despite the war. Ivchenko-Prohres gave away its unique technologies.

All of these are the signs of a persistent chronic management crisis, referred to as irresponsibility and which undermines Ukraine’s national security.

Few people paid attention to the sharp comment by Denys Hurak, deputy director of Ukroboronprom in 2014-18 in the same article of The Wall Street Journal. It bears the main message for Ukraine: Kyiv will not be able to count on joining NATO if it becomes part of the military strategy of the Celestial Empire.

Undoubtedly, the Office of the President Volodymyr Zelenskyi is not to blame for the fact that the events around Motor Sich are unfolding in almost the worst case scenario for Ukraine. It is new Commander-in-Chief that will have to cut this “Gordian knot”.

And most importantly – to arrange an audit of the cases in the national defense industry as soon as possible, in order to avoid this and similar catastrophes in the future. After all, the Russian bear is not going to hide his claws.

Hlib Kanievskyi, StateWatch, Marlin Project, for the UP