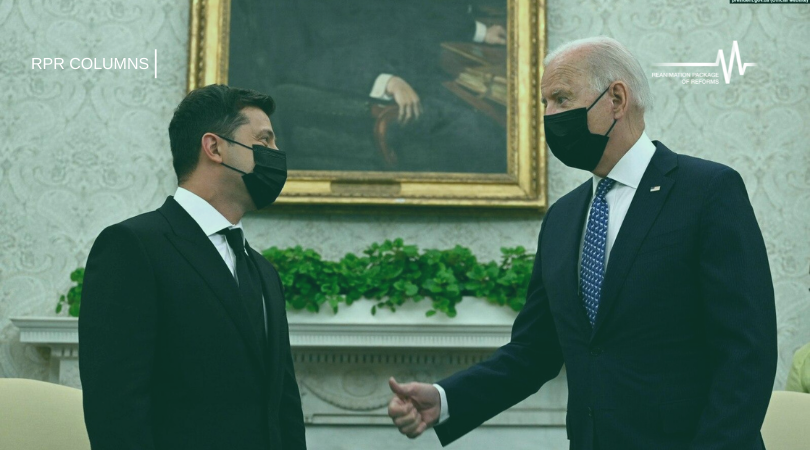 Here is how the US can truly help Ukraine move forward

Читайте нас також у Telegram
The meeting between US President Joe Biden and Ukraine’s President Volodymyr Zelenskyy which took place at the beginning of September in Washington resulted in producing a joint statement regarding US support for Ukraine. The statement included a broad set of issues Ukraine has to work on, with security being at the center.While the US expressed its commitment to Ukraine’s implementation of necessary reforms to fulfill its European and Euro-Atlantic aspirations, as well as to Ukraine’s sovereignty and territorial integrity, the question “what is next?” arises. Ukrainian experts gathered to discuss Ukraine’s progress and obstacles in areas the joint statement covers. The discussion took place during an online meeting of the Transatlantic Task Force on Ukraine.

Jonathan Katz, director of Democracy Initiatives and a senior fellow with the German Marshall Fund of the United States, shared some observations from Washington regarding the Biden-Zelenskyy meeting and stressed the importance of the joint statement. While Nord Stream-2 remains in focus, the statement goes much beyond that and according to Katz, can deepen the relationships between the two countries.

“When you look at it, you see a strong US commitment to Ukraine beyond security and defense, including support to democracy, justice, human rights, energy and climate, economic growth, prosperity, pandemic support, humanitarian assistant support.”

He highlighted the importance of the message transmitted at the presidents’ meeting: that Ukraine’s success is essential to the global struggle between democracy and autocracy.

Orest Deychakiwsky, a former senior policy advisor at the Helsinki Commission, also called the meeting encouraging and reassuring, especially after the turmoil that the Ukraine-US relationship experienced during the previous US administration.

“The visit was a return to normality and some semblance of stability.”

Ups and downs of Ukraine’s security and defense sectors

The joint statement pays much attention to issues related to defense and security, specifying its particular aspects.

Evaluating progress in the abovementioned areas Olena Tregub, Secretary General of the Independent Defence Anti-Corruption Committee, pointed out the resistance to changes within the system itself. Over the last year and a half, these changes included:

Due to the resistance coming from the inside, the above-mentioned reforms have not been really implemented.

Commenting on the progress with the new procurement law, the expert stresses that it has not been implemented because the government officials on the level of the Ministry of Defence and the Ministry for Strategic Industries have not adopted necessary secondary legislation to enable the work of the new procurement system. And, according to the expert, the Ukroboronprom transformation has been delayed significantly by governmental officials who have an old mindset and no interest in such fast transformations.

While admitting Zelenskyy’s political will to adopt particular legislation, Tregub notes that there is a lack of willingness from the side of the president to really fight the resistance and push the reforms.

The expert is looking forward to the implementation of the US-Ukraine commitments, since cooperation between international partners, policymakers, and civil society has already proven to be key to pushing through difficult reforms.

Yet, security and defense is not the only area of internal resistance to reforms. In particular, it remained to be a huge challenge for the judicial reform as well.

Delay with the judiciary reform

The judiciary has already become a keynote of the international agenda regarding Ukraine. In particular, it was included in the IMF and the EU memorandums, and was mentioned as a number one priority during the visit of the US Secretary of State Antony Blinken. As well, it was put on the list of priorities in the US-Ukraine joint statement.

Significant developments in the judiciary took place already after the Zelenskyy-Biden meeting. In particular, the process of implementation of the reform after adopting corresponding bills in the summer of 2021 was delayed. The change is related to creation of an Ethics Council called to form the High Council of Justice, the highest judiciary executive body according to the new principles. The cornerstone of the change is that half of the body has to consist of international experts delegated by international organizations, and the other half is to be made up of members delegated by Ukraine’s Council of Judges. While the former already delegated a strong set of candidates, the Council of Judges failed to do their part and continue to delay the process. Ukraine’s NGOs dealing with the area already termed this sabotage.

Mykhailo Zhernakov, Head of Board at the DEJURE Foundation is confident that the reform of Ukraine’s judiciary being on the high agenda between the US and Ukraine is good news. Less pleasant news, however, is that the reform is far from being completed.

“I fear we have made the same mistake as many times before. We (Ukraine) delegated too much power to the same judiciary we would like to reform.”

Still, Zhernakov is confident that whoever is the source of the problem, it is still president Zelenskyy who bears political responsibility both before the people of Ukraine and Ukraine’s international partners.

“I think he has the power to reverse the situation and convince the judges to fulfill their role.”

The expert warns that if Ukraine lets this reform fail again, it might not have such a chance in many years to come.

Putting climate and energy security issues on the agenda

For the first time, the issue of climate change was included in the top level of negotiations. The experts called this step a milestone in the bilateral relationship that confirms that both countries are serious regarding the issue.

“NGOs have continually addressed the connection between energy security and climate issues in the last decade, because Ukraine’s critical dependence on supplies of fossil fuel and petrol from Russia and Belarus gives the Kremlin heavy leverage in terms of economic and political influence,” Kostyantyn Krynytskyi, Head of Energy Department at Center for Environmental Initiatives Ecoaction said during the task force.

“The creation of a separate company proved to be very successful, brought major economic benefits, and improved energy security of the whole region and Europe as a whole. Now we have professional and accountable management and corporate governance in the gas transmission system operator. Naftogaz also showed significant progress in corporate reform, despite the fact that we know that the management of such a strategic company is a political issue as well.”

The expert expressed his expectations that the bilateral cooperation is to help Ukraine finally build a long term policy in the energy sector, since so far it has been a mix of different interests. As well, according to Krynytsky, a strong partnership can help Ukraine reduce Russia’s influence.

Krynytskyi also highlighted developments in the nuclear sector as going in parallel to Zelenskyy’s visits: a delegation of Ukraine’s nuclear industry management had meetings in the US as well. As a result, two memorandums on cooperation in the nuclear energy sector were signed. While the expert questions the possibility of their implementation, he underlines their political significance.

“They signal that Ukraine is no longer considering the possibility for developing nuclear energy with Russia.”

Main directions for the economic growth

“A common problem is that Ukrainian international partners allocate a lot of money to Ukraine but Ukraine is simply unable to use it. So in this case we have to develop institutional capacity, and this institutional capacity is not only about combating corruption and public administration, but is a much more complex issue.”

The expert is confident that without them, it is problematic to implement infrastructure projects in Ukraine, as well as to talk about the efficient operation of the military industrial complex.

“Recently Ukraine enjoyed a system of the preferential trade regime. While now it is standard, as far as I understand, right now the American government is trying or looking for a plan to reinstall it.”

Among other issues for cooperation, Burakovskyi mentioned dealing with the consequences of the Chornobyl nuclear disaster, developing green energy, and work on demonopolizing the economy.

“Ukraine has a highly monopolized economy. And in this particular case the law on the deoligarchization of Ukraine, from my point of view, is rather a political statement. What we need to do is to increase and to make a more politically independent Ukrainian Anti-Monopoly Committee.”

Burakovsky also calls on Ukraine and its international partners to pay attention to the local level developments in order to achieve economic growth of Ukraine in general.