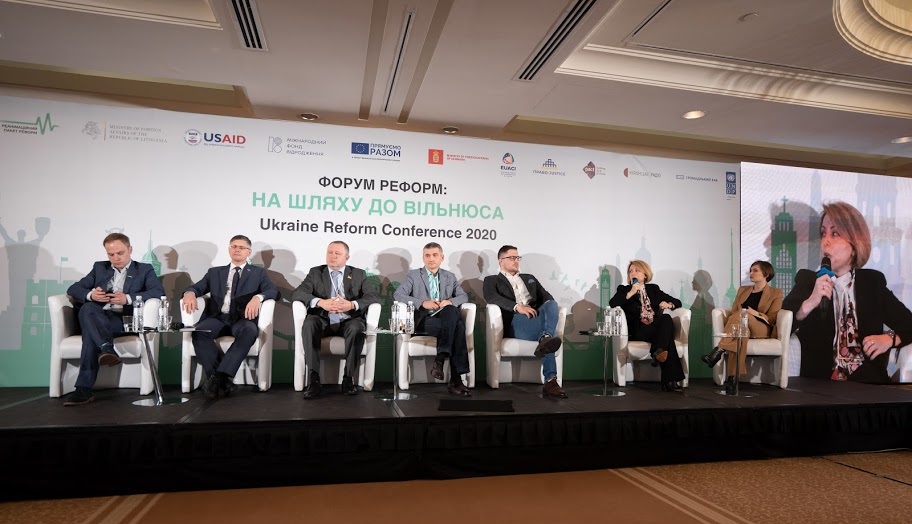 Experts: Judicial reform blocked by the Supreme Council of Justice

Why is judicial reform hindered? How should the Security Service of Ukraine be reformed? Is the reform of the Prosecutor General’s Office effective? That was discussed by the speakers of Reforms Forum: On the Road to Vilnius during panel discussion #3 Rule of law: how to build a fair system of justice and law enforcement

Judicial reform, the cornerstone of the fight against corruption

Judicial reform has hardly progressed since its launch in 2014. At the moment it is blocked by the Supreme Council of Justice (SCJ), proclaims Andriy Borovyk, Executive Director of Transparency International Ukraine. Carrying out the judicial reform rests with the object of the reform itself, which is a key problem, confidently says Roman Kuybida, Deputy Head of the Board of the Centre of Policy and Legal Reform. “The SCJ did not become an advocate for change. Therefore, the law №193-IX (On Amendments to the Law of Ukraine “On Judiciary and Status of Judges” and Some Laws of Ukraine on the Activity of Judicial Governments), this is just a way to get out of the critical situation surrounding the evaluation and selection of judges. ”, says the expert.

He proposed to view the reform as a set of projects: “Each project must be accounted for by the body that will implement the project from law to proper implementation. “We create the Supreme Court, and the authorities immediately declare the need to reduce it. This creates a sense of inability to pursue further proceedings adequately”, says the deputy.

The only successful reforms were the ones to be strictly articulated by the authorities under pressure from civil society: restarting the National Anti-Corruption Agency, returning an article on illicit enrichment, launching an effective mechanism for defending accusers.

“But there were situations when no strict articulation was present (restarting the Supreme Council of Justice) and there are no results”, sums up Yurchyshyn.

The battle against corruption cannot be carried out in one area only. Especially, when the problem is as deep as it is in Ukraine, draws attention Eka Tkeshelashvili, Head of Programme, Head of EU Anti-Corruption Initiative (EUACI). The National Anti-Corruption Bureau of Ukraine and the Specialized Anti-Corruption Prosecution are examples of successful anti-corruption reforms. But this success can be offset by the shortcomings of judicial reform.

“The lack of progress in the judicial component or reforms was often caused by the decisions of the Constitutional Court. These decisions could endanger the system of e-declaration. It is not possible to take anti-corruption measures in one area only, the work must be done comprehensively”, emphasizes Tkeshelashvili.

Restarting the State Bureau of Investigations with a violation of the rule of law?

The dismissal of Roman Truba, the director of the State Bureau of Investigation (SBI), took place in the absence of real grounds. The one to draw attention to it was Eugene Krapyvin, Expert and Project Manager at Centre of Policy and Legal Reform. There is no professional criterion in the law for dismissing the director of the SBI as an audit for NABU.

“The Parliament dismisses the SBI director on all grounds with the adoption of bill №1116, violating the rule of law”, says the expert.

According to Krapivin, one of the legal procedures for dismissing the director of the SBI would be to open criminal proceedings against him.

The reform of the Security Service of Ukraine is hampered by its head, Ivan Bakanov, says Vitaliy Shabunin, Chair of the Board of Anti-Corruption Action Centre. “Bakanov has submitted a bill that keeps all existing problems in the SBU. He simply retains management and the ability to intervene in the economic activity”, warns the expert.

The reform also requires the demilitarization of the SSU, as the service’s activities must meet NATO standards. On that spoke Fredrik Wesslau, Deputy Head of Mission at EU Advisory Mission for Civilian Security Sector Reform. Reform of the Office of the Prosecutor General of Ukraine: the first results

At the moment 55% of prosecutors have already been released and are on the first stage of recertification, says Ruslan Riaboshapka, Prosecutor General of Ukraine. He listed the preparation of new standards for evaluating prosecutors’ activities as one of the components of the OPGU reform.

“A system of job evaluation is currently being developed. On it depends the way the workers will be stimulated.  We will soon bring this project up for public discussion”, announces Riaboshapka.

Reform of the OPGU is one of the largest in Ukraine and it is already delivering results, thinks Frederik Wesslau.