Reanimation package of reforms > News > Infographics > Experts, government officials and international partners discussed priority reforms and the role of the public in the pre-election period 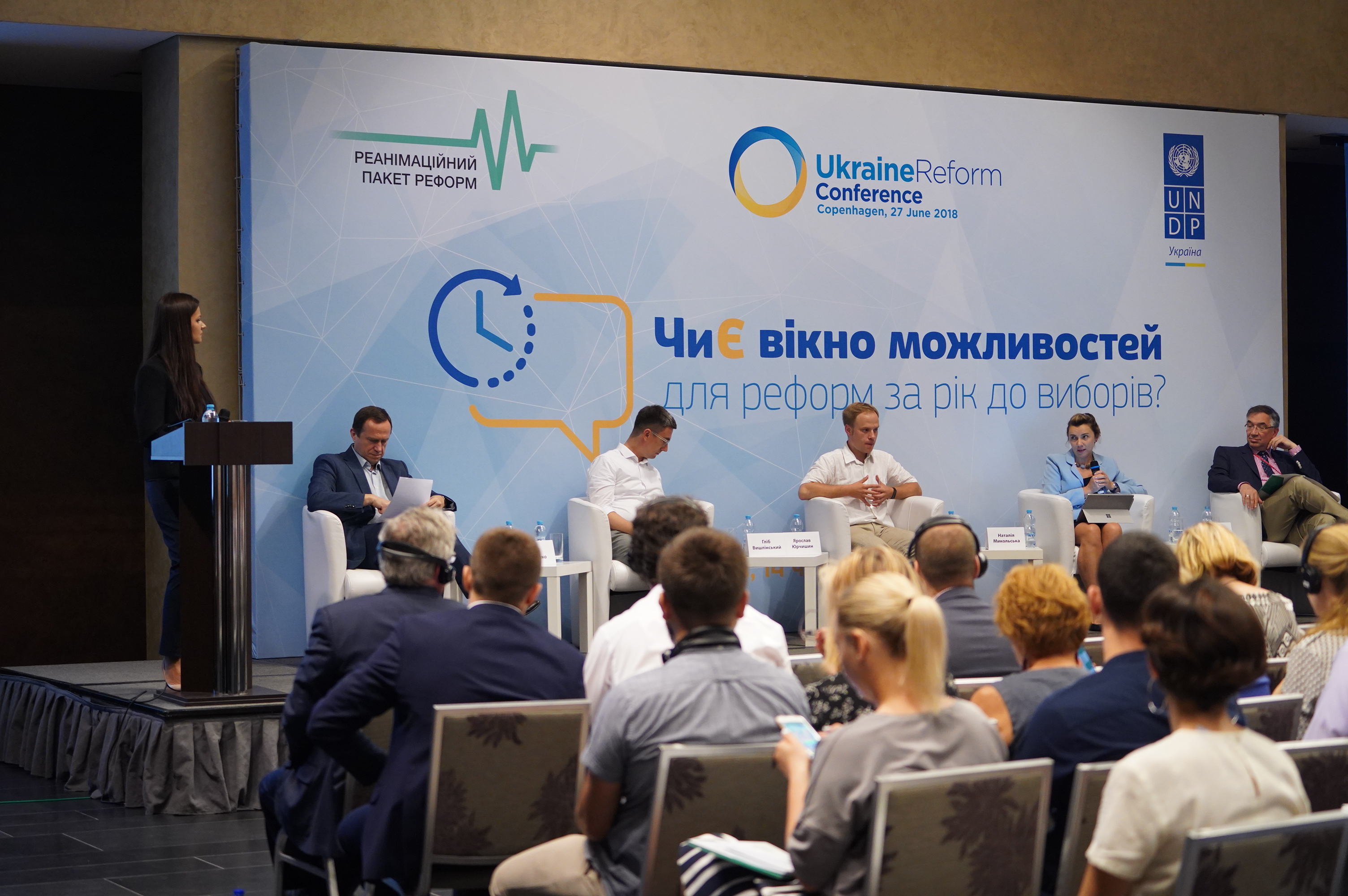 Experts, government officials and international partners discussed priority reforms and the role of the public in the pre-election period

Top reforms that need to be implemented before the start of election campaigns and mechanisms for effective cooperation between the public and the authorities during this period – these are the topics that were discussed at the socio-political forum “Stepping Stones or Stumbling Blocks: What Does the Pre-Election Year Hold for the Reform Agenda?”. This forum precedes a major International Ukraine Reform Conference in Copenhagen which will bring together key reform stakeholders both from Ukrainian and the international community.

The Forum was opened by Ambassador Extraordinary and Plenipotentiary of the Kingdom of Denmark to Ukraine, Ruben Madsen, who pointed out the importance of civil society engagement in reforming the country. “Civil society plays a decisive role in reforming Ukraine insisting on the necessary, albeit sometimes painful reforms, controlling the government and proposing solutions for reforms. A strong civil society in Ukraine is an indispensable participant of the reform process. You are working to change the country for the better not simply requiring action from the authorities, but also taking an active part in setting priorities and assisting in the implementation of reforms,” said Ruben Madsen.

RPR experts presented nine key reforms to be implemented during the pre-election season. Most of them are in line with the priorities identified by the international partners of Ukraine. “Early in the year, G7 identified a list of five priorities which coincided with the list of government priorities and those of the Reanimation Package of Reforms. In social networks, commentators wrote that our list was cool, but when we answered that these were actually the priorities of the Ukrainian government, the commentators’ enthusiasm went away. How can you persuade someone abroad that something is happening in your country, that the country is moving in the right direction, and changing if there is no trust and confidence? First, you have to learn to see and acknowledge your success inside your country,” said Roman Washchuk, Ambassador Extraordinary and Plenipotentiary of Canada to Ukraine.

Ihor Koliushko, chairman of the Centre of Policy and Legal Reform, stressed the key changes in the aspect of public administration.

“Completion of the creation of a correct system of directorates, a new system of strategic planning in the Government, a new structure of the ministries, changes to the legislation on the Cabinet of Ministers, the law on administrative procedures, a new model for the formation of a new Government – these are the priorities for public administration reform,” said Ihor Koliushko.

In addition, the expert said that in order to implement the electoral reform, a new composition of the Central Election Commission, electoral code and draft laws on all-Ukrainian and local referenda should be approved. “I am convinced that there is a window of opportunity, and it is in the hands of the president, the prime minister and the parliamentary majority. Everything has been prepared with the help of the public and now they are the people who have to make the decision and implement it,” says Ihor Koliushko.

Hlib Vyshlinskyi, executive director of the Center for Economic Strategy and member of the RPR Board, emphasized that there are several priorities in the socio-economic field, in particular. However, the most important task of the authorities at the moment should be the resumption of cooperation with the International Monetary Fund.

“Unlocking the land market in Ukraine is the number one priority on the reform agenda. After all, the European Court of Human Rights has emphasized that the land market blocking is a violation of human rights, and over time, there will be more and more decisions like that. However, to launch the land market, it is not enough to simply abolish the moratorium, we also need to pass a law on the circulation of agricultural land,” said Hlib Vyshlinskyi.

The expert also stressed on the importance of launching  the energy efficiency fund, monetization of subsidies and transparency of the energy sector, as well as the adoption of the law on currency liberalization and waste management regulation as the most important goals.

Yaroslav Yurchyshyn, Executive Director of TI Ukraine, spoke about the priorities for the authorities in the fight against corruption. “Completion of building an effective system of anti-corruption bodies through the establishment of an independent specialized High Anti-Corruption Court is a priority for anti-corruption reform,” said Yurchyshyn.

The expert said that in the field of fight against corruption there are outright achievements despite the fact that they are not spoken about much.

“Now you can get a passport without a bribe, win a bid without corruption arrangements. Before, it was impossible. Therefore, there is some progress,” says the expert.

In addition, he stressed on the need to ensure public access to the rule of law through judicial reform, as well as to develop mechanisms for democracy, especially at the local level, in order to enable citizens to influence the decision-making process.

Anti-corruption reforms are important not only in the opinion of the public and international partners, but also government officials. “There is some economic growth, but it is not system-wide and insufficient. System-wide reforms are needed to make it irreversible. And a very important signal for investors is the launch of the Anti-Corruption Court as a sign that we have created institutions to combat system-wide corruption,” said Nataliia Mykolska, Deputy Minister of Economic Development and Trade.

Also, the official believes that now in Ukraine, in addition to launching effective operation of anti-corruption institutions, it is important to support the export aspirations of Ukrainian entrepreneurs, to improve the business climate through the introduction of effective public administration, and the introduction of currency regulation.

During the second discussion, experts and politicians discussed mechanisms of public influence on the course of reforms. Communication was defined as one of the important mechanisms to fight populism. Iryna Bekeshkina, Director of Ilko Kucheriv Democratic Initiatives Foundation, presented the results of a sociological study. “Only 10% of the respondents stated that they received enough information about reforms, while 47% said that there was not enough information and it was not true. A vivid example of failed reform communication is healthcare reform with a campaign to sign declarations with doctors. At the moment, 28% of Ukrainians have signed agreements with their family doctors. Of those who did not conclude agreements, 48% do not know how to do this,” said Bekeshkina.

The experts point out that during an expert survey, experts identified the main risks for reforms – focus of politicians on the election campaign and populism.

Oleksandr Saienko, Minister of the Cabinet of Ministers, noted that in order to prevent abuse of processes, it is necessary to “remove the official” as much as possible by deregulating these processes and providing services electronically. “In 2018, National Health Service, National Service for Education Quality, electronic system for the sale of privatization targets, corporatization process were launched. However, for them to work efficiently, to produce results and to be properly perceived by the public, their activities should be transparent – it is only then that the public will become an ally of the authorities in advancing change,” says Saienko.

Head of the EU Delegation to Ukraine, Hugues Mingarelli, stressed that Ukraine, being in difficult situation, accomplished much. Nevertheless, he noted that further implementation of reforms will be the best fight against populism. He stressed on the need to make High Anti-Corruption Court  operational as soon as possible. “On our part, we believe that the Anti-Corruption Court should be established now… The Government must take the necessary steps to confirm its statements, declarations. It’s just a catastrophe, and someone has to do something to ensure that the National Agency on Corruption Prevention can track the submission of declarations and to ensure that the process is finally underway,” said the Head of the EU Delegation to Ukraine.

In addition, he once again stressed the need to cancel the declaration of income by NGO representatives.

Olha Aivazovska, coordinator of the election programs of the Civil Network OPORA, spoke about the elections as a way to change the situation in the country and to join the process of policy development. “68% of citizens are dissatisfied with the integrity of the election, but only 16% of citizens pursued active actions to expose violations during the elections. Strengthening the criminal liability for violations at the elections has to become a powerful tool to combat “unfair rules of the game” during elections, such as illegal use of ballots, bribery, undue advantage to the candidate, etc.,”- said Olha Aivazovska.

The expert also mentioned the socio-economic subvention as a manipulative way for politicians to “pay” for the election campaign of majoritarian candidates out of our pockets. The largest number of subventions per MP is given to the People’s Front, Revival, Petro Poroshenko Bloc “Solidarity” and People’s Will.

Borys Davydenko, editor-in-chief of VoxUkraine, stressed that critical thinking, fact checking and factual assessment are the main methods in the fight against electoral populism.  He presented Index for Monitoring Reforms which was in development for almost three years by means of expert review and provides an overview of the course and activity of reforms. “The latest reform index has reached zero for the second time during the existence of this project. So the question whether there will be reforms a year before the elections is really relevant and has no answer” says Borys Davydenko.

Serhii Pinchuk, co-founder of the Regional Coalition Rivne Reform Council, stressed that despite the government’s inconsistent steps in the process of implementing the reforms that make it difficult to understand the rules and the vector of development, citizens still have good opportunities to influence changes in the country. “The window of opportunities for reforms on the eve of the elections becomes particularly relevant, especially at the regional level. It is the civil society and local activists who can draft an agenda for the introduction of changes and requirements from candidates. There should be more than one organization because this voice will not be heard. If this is an association of most effective organizations, and let me note that politicians will need commitment from the opinion leaders with a positive balance of trust before the elections, politicians will try to listen to their demands,” said Serhii Pinchuk.

In total, 130 participants took part in the event, they included government officials, international partners of Ukraine, journalists, experts and activists from both Kyiv and the regions.
The Forum was organized in partnership with UNDP with the financial support of the Ministry of Foreign Affairs of Denmark. The Ukraine Reform Conference will be held on June 27, 2018 in Copenhagen. The Governments of Ukraine and Denmark are the partners of this Conference. The Reanimation Package of Reforms is a partner of the Conference representing the civil society at the event held in Ukraine. This Conference was held for the first time in London last year.
RPR priorities