Reanimation package of reforms > News > Columns > Expectations vs Reality: are the Peaceful Plans of the Authorities Realistic? 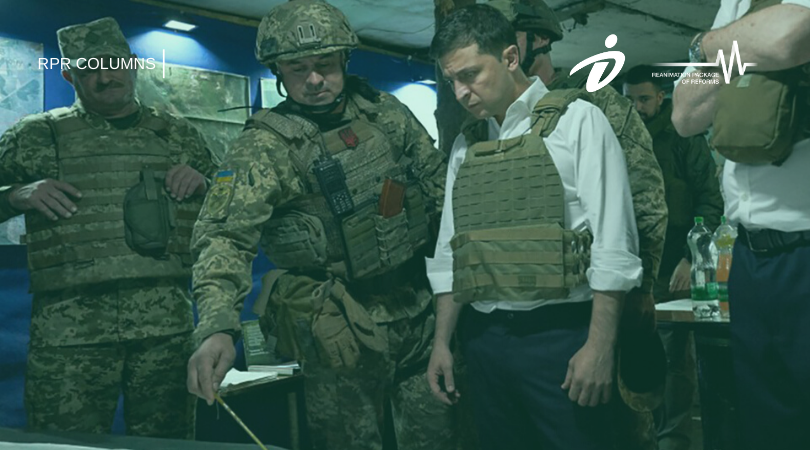 Expectations vs Reality: are the Peaceful Plans of the Authorities Realistic?

It seems that we are on the verge of the Rubicon.

The agreement on reformatting the Minsk TCG, agreeing to direct negotiations between Ukraine and the self-proclaimed “L/DPR”, poorly convincing denial of this by Andriy Yermak and calls for early and unconditional reconciliation from the NSDC adviser, Sergei Sivokho – all this could be division on the before and after in the history of the conflict with Russia.

Moving from a position where Kyiv stood firmly on the position “security first” and did not suppress the role of the Russian Federation as an aggressor, to a period of illusory “internal reconciliation”.

The analysis of the consequences of direct negotiations with the Temporarily occupied and uncontrolled territories of Ukraine, no matter the format, shows one thing: it is unacceptable to agree to such tectonic changes in the Minsk process. There is no way back in the negotiations.

The absurdity of the transition to the political track (which will inevitably throw the safe one into oblivion) becomes even more evident when one looks at the starting conditions for this.

Therefore, I suggest to evaluate:

The new Freedom House report, where the section on occupied Donbas was presented separately from the general report on Ukraine for the first time, completely shatters any illusions about the possibility of an electoral process in occupied Donbas.

The overall rating of the Political Rights section was -1 out of 40 possible points, which is because of the threat of danger posed to those locals who openly declare their Ukrainian identity.

All the other zero-pointers, such as on fundamental rights and freedoms, which were further defined in Article 10 of the Law on Special Status. Along with the strictly safe conditions, there are also fuses concerning:

There is no hint of pluralism in the occupied territories even in the midst of local, separatist movements.

Monopoly in the parliaments of “DPR” and “LPR” is maintained, respectively, by the movement the Donetsk Republic and Peace for Luhansk, which are also headed by Pushiliin and Pasichnyk.

There are also Free Donbas and Luhansk Economic Union to add variety, so to speak. And the game of “definitions” – they say, it is “public associations” – aims not only to show the “closeness” of the authorities in the pseudo-republics.

At the Minsk negotiations, militants defend the majority system for hypothetical elections. Insist that they do not even have political parties, then why allow some all-Ukrainian political party to “enter” the territory.

No freedom of association, even rallies or meetings calling for integration with Russia are prohibited if they also criticize local separatist authorities.

A complex system of control over the activity of citizens in any sphere, including social networks.

The dominance of separatist media and propaganda.

In March 2019, the Democratic Initiatives Foundation surveyed the checkpoints of exit-entry. At that time, Russian TV channels, which crossed the checkpoints, were the main source of information for citizens- 49%, local separatist channels occupied 23%.

However, at the same time, 48% were Ukrainian TV channels, but among them are ones like Newsone and such.

The Institute of Mass Media regularly analyzes how contrary to the Ukrainian discourse or, more precisely, the real status quo, are the explanations of the separatist mass media about the elections, the “special status” and the future of the “L/DPR”.

It is futile to hope that this discourse will change all at once, though its effect is not eternal, it is for this purpose that a transition period is needed, and not quick decisions about “here and now.”

“Internal Dialogue”: Of Who with Whom?

The author of this article has for a long time insisted on establishing horizontal ties with the inhabitants of the occupied territories, unless progress has been made in diplomatic negotiations.

But it is not as simple to conduct as may seem at first. The Freedom House report emphasizes the absence of any civil liberties there.

The logical question is: can there be a dialogue in such conditions? The answer is yes, but it is not as straightforward as anyone would like.

Dialogue is a tool for reintegration, not conflict settlement. It cannot replace a security agreement in a conflict region.

In the absence of political agreement to end the conflict, communications with the residents of Temporary Occupied Territories (TOT) is an adjunct that guarantees social interaction and reduces hostility.

Consequently, dialogue can broadly be divided into two components:

1) before agreeing with the Russian Federation (i.e. in the current conditions)

2)after already within the real reintegration process

Accordingly, there must now be indirect methods of influencing the mood of TOT residents:

Therefore, the dialogue at the current stage is not a direct conversation of a doctor from the controlled territory with a colleague from the occupied one.

Instead, it is an open health policy for residents of the occupied areas. Initiatives and programs that would allow them to go to Ukrainian hospitals from TOT , and not vice versa, as is often the case (Donetsk or Luhansk with their regional base for many citizens in the controlled area are closer / cheaper / more convenient than hospital facilities Severodonetsk or Mariupol).

This is not a professional exchange in knowledge through the line of demarcation.

Federation of trade unions in one “republic” as well as in another is headed by deputies of the “People’s Soviets”. What kind of independent horizontal dialogue can this be about? How can relations between professional communities be established if they are managed by their “parliamentarians” from the “L/DNR”? Or is it perhaps the exact “direct dialogue” that Russia is demanding from Kyiv regarding Donetsk and Luhansk, but in a more lenient form, in order not to disturb Ukrainian society?

This is not necessarily a joint performance of any Ukrainian theatre from Kyiv with the Luhansk Theater on the Defense (even if its name still means “Ukrainian musical and dramatic”). Why you may ask? Probably because the stars of the Luhansk theatre are also the Orders of the “Young Republic”, like the famous Mikhail Golubovich. The artistic director of the theatre after 2014 managed to receive medals “For Achievements”, “For Loyalty to Duty” from “LPR” and became a People’s Artist of “LPR”.

With total control of all spheres of life, a dialogue with any population group with TOT can be organized only on one condition: if it is sanctified by the leadership of the pseudo-republics.

That is why the idea of a National Platform for Reconciliation, while positive in nature, cannot exactly go against the situation at the front and focus on “forgiveness”.

Moreover, the messages of the curator of the platform on internal conflict, inappropriate comparisons of the problem of the war with the amber “republics” negate the responsibility of Russia and turn upside down the realities of occupation.

“We are going to organize venues, for the start so to speak, by interests, by profession – physicians with physicians, businessmen with businessmen, students with students. We will develop a common position at these dialogues, which will be broadcasted further,” says Sivoho.

I would like to reiterate that links with civilians in the occupied territories are the key to reintegration, no matter when it will begin, but these links should not de facto cover the beginning of a dialogue with pseudo-republic structures. Because in this case, it turns out that the key obstacle to the return of these territories under the control of Ukraine is the position of the residents there.

And then we fall into (or deliberately enter) another Russian trap: the same direct dialogue, but not only at the level of the Minsk TCG, but also as a seemingly civil, interpersonal “reconciliation”.

When consultations with representatives of self-proclaimed formations are already underway (even if your visions are “independent” trade unions or “public” organizations), it will not be possible to stop this flywheel of implementing Minsk political points instead of security ones.

Maria Zolkina, analyst at the Ilko Kucheriv Democratic Initiatives Foundation, for UP