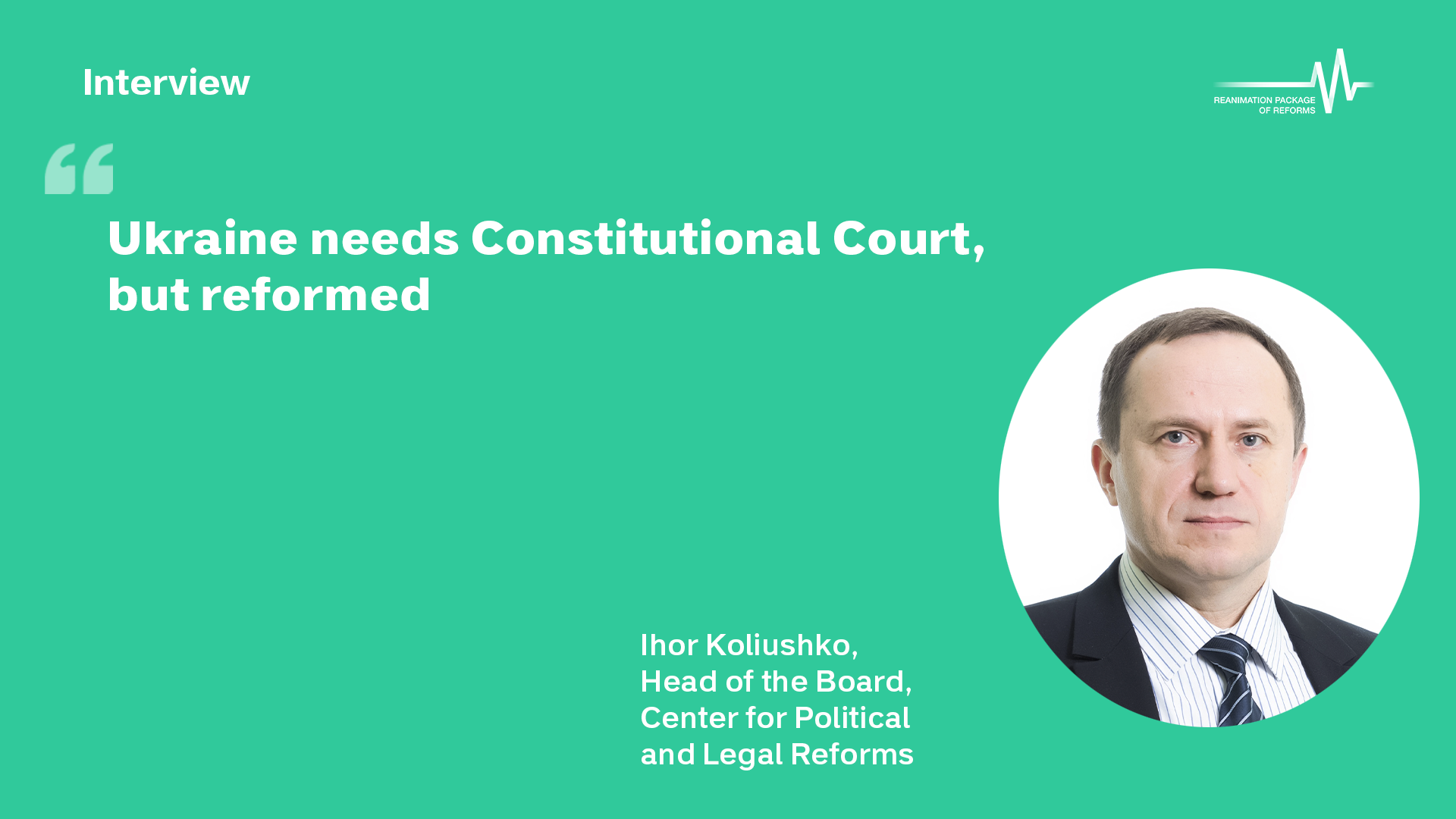 Continuing calls for the dissolution of Ukraine’s Constitutional Court by President Zelensky’s team are unfounded, says Ihor Koliushko, a former Ukrainian MP and the founder and head of Ukraine’s Center for Political and Legal Reforms. In an interview with Svitlana Sydorenko for Kyiv Post, Koliushko acknowledged the need to reform how judges to the court are appointed and underlined the importance of Ukraine adopting the 1968 Rome Statute of the International Criminal Court on war crimes and genocide.

[Sydorenko] Mr. Koliushko, in your opinion, should calls to dissolve the Constitutional Court of Ukraine be taken seriously? Is it really necessary to raise such an issue now?

[Koliushko] I sincerely believe that it is not necessary to raise this issue, but from time to time it has come up anyway. And this is not the first time. If you recall, starting in 2020, and especially in 2021, leading members of the Servants of the People party and President Zelensky have constantly demonstrated unease with the existence and activities of the Constitutional Court of Ukraine.

Instead of establishing good relations between the different branches of power, President Zelensky’s team is constantly trying to pick fights with the Court, often in violation of the Constitution. Most of the judges of this Court, all of its members, have always been willing to listen to the president of Ukraine (both Zelensky and his predecessors) because they are afraid that the Court will be dissolved or its funding will be cut. But at the same time, they want to be respected as an independent branch of power, so that they are not given orders, or, worse yet, forced to make illegal decisions. When this has happened in the past, the justices have rebelled.

So, what do we see today? The president’s official representative to the Court [Fedir Venyslavsky] is simultaneously serving as an MP, which is prohibited by Ukrainian legislation. He openly calls for the dissolution of the court. The Office of the President has demonstrated this attitude since the end of 2019 [the year Zelensky became president].

However, this decision is also due to inaction on the part of the Verkhovna Rada and the President of Ukraine, because when someone files a constitutional appeal on the unconstitutionality of a law, the Court initiates proceedings that last several months or even years. If, during this time, the law under appeal is amended, the Court will close the proceedings without consideration of the amendment of the law. Therefore, the question arises: you all see what arguments have been set out in the constitutional appeal, which often contains reasonable proposed amendments to the law. So why not correct them ahead of time? Why not make changes to the law so that it complies with the Constitution and thereby prevent the Court proceedings from being stopped.

For some reason, neither the President nor the leadership of parliament care to consider this. They wait until the Court makes a decision and then the search for shortcomings in the decision begins. Then, in 2020, the President submitted a motion to the Verkhovna Rada to dissolve the Court and dismiss all its justices, which is completely unconstitutional. He then, exceeds his authority and dismisses two judges from the Court, creating a red-tape mess that has gone on for more than a year now.

The upshot is that there are now a lot of lawsuits before the Court. In truth, I think, the reason for these suits is the sloppy appointment of judges. Unscrupulous and unprofessional candidates are getting appointed. But this doesn’t mean that the Court is useless and we should dissolve it. In a mixed model of government, a Constitutional Court is crucial due to conflicts that arise between various branches of power. And only the Court can resolve these problems effectively. In most countries of the EU, which Ukraine is attempting to join, they have such a court.

[Sydorenko] The Office of the President has said the country needs fresh judicial reform, as the previous one defined the Constitutional Court of Ukraine as inviolable. In your view, is there really a need for more judicial reform in Ukraine?

[Koliushko] The amendments to the Constitution passed in 2016, which are, in essence, judicial reforms, have significantly improved the Constitution in terms of their regulation of the judiciary and the Court itself. They are not perfect and could use some fine tuning.  But it would be wrong to talk about canceling these reforms altogether.

The status of the Court’s justices has improved under these reforms, but a key problem was not solved – their appointment to the court from the Congress of Judges. The judges who Congress nominates have always been the weakest link in our constitutional justice system. Therefore, in my estimation, it is necessary to change the procedure for appointing judges of the Court by removing the Congress of Judges from the process

It is generally accepted that the justices of the Court can be dismissed by the Court itself. But the Constitution could be amended to allow for the impeachment of the Court’s justices in addition to their dismissal. So, for example, if a judge commits a crime, causing him to lose credibility, a no-confidence vote could be passed with the support of 3/4 of parliament, or on the recommendation of the president, 3/5 support of parliament.

A similar procedure exists in other countries, but we do not have one. It would not threaten the autonomy of the Court’s justices, but it would create a mechanism to prevent ‘crazy’ situations such as the one involving Oleksandr Tupytsky [12th Chairman of the Constitutional Court of Ukraine, who fled to Austria to escape criminal charges in Ukraine].

[Koliushko] The amendments to the Constitution that we talked about above are currently impossible due to martial law.

At the same time, it is possible to do something about the Law of Ukraine “On the Constitutional Court of Ukraine” – particularly the Constitutional provision on the competitive selection of judges, which was added in 2016 but has still not been implemented. There have been several draft laws to create a special qualification commission to select nominees based on their qualifications and integrity, before they are considered by the President, the Verkhovna Rada [Ukrainian Parliament] and the Congress of Judges. Unfortunately, each branch of government began to interpret the above provision in its own way.

Former Ukrainian President Petro Poroshenko set up his own competition commission. The Congress of Judges did not set up any commission but decided that its functions would be performed by a council of judges, which is an outright violation of the Constitution. The Verkhovna Rada decided to consider nominees submitted by parliamentary factions, with the role of the commission being played by the relevant parliamentary committee, which is also a violation of the Constitution.

[Sydorenko] What is the international position on judicial reform in Ukraine, or do our foreign partners not come into play here?

[Koliushko] The world is closely monitoring developments in Ukraine around these issues, in particular discussions on whether the Court should continue to exist. Any attempt by Ukraine to move away from recognizing the rule of law in this or any other field would be very detrimental to our progress towards EU membership.

[Sydorenko] Do you think Ukraine needs to ratify the 1968 Rome Statute of the International Criminal Court on war crimes and genocide? After all, there are a number of countries that have not ratified it for various reasons, fearing that it would lead to foreign interference in their national legislation.

[Koliushko] Yes, there is a debate on this, but according to the larger legal community, the Rome Statute needs to be ratified. We would gain much more from this than we would risk.

As of today, the Russian Federation is the largest violator of international law on war crimes. That is why we are appealing to the International Criminal Court, although we ourselves have not ratified it. Our authorities are afraid that our military commanders could be subject to prosecution. However, we cannot demand accountability from others if we don’t accept it ourselves. Therefore, it is necessary to put things in order and not be engaged in legal trickery.

If we, as a country, take a clear position on acts that are recognized by international law as crimes of genocide, crimes against humanity, war crimes and crimes of aggression, we must not tolerate them, we must fight against them with the help of both domestic law and by ratifying the Rome Statute and joining the jurisdiction of the International Criminal Court.

[Sydorenko] On 20 May 2021, the Verkhovna Rada adopted the Law of Ukraine “On Amendments to Certain Legislative Acts of Ukraine on Implementation of International Criminal and Humanitarian Law”, which was not signed by President Zelensky. In your opinion, does Ukraine need this law?

[Koliushko] Top experts have been working on this law for four years, incorporating into it numerous norms of international law on war crimes. Therefore, the law is definitely of good quality and Ukraine needs it. But our authorities have concerns about the possible liability of our military commanders for war crimes. Apparently, that is why the president did not sign it, instead returning it within the set deadline for reconsideration. So now this very badly needed law finds itself in limbo.