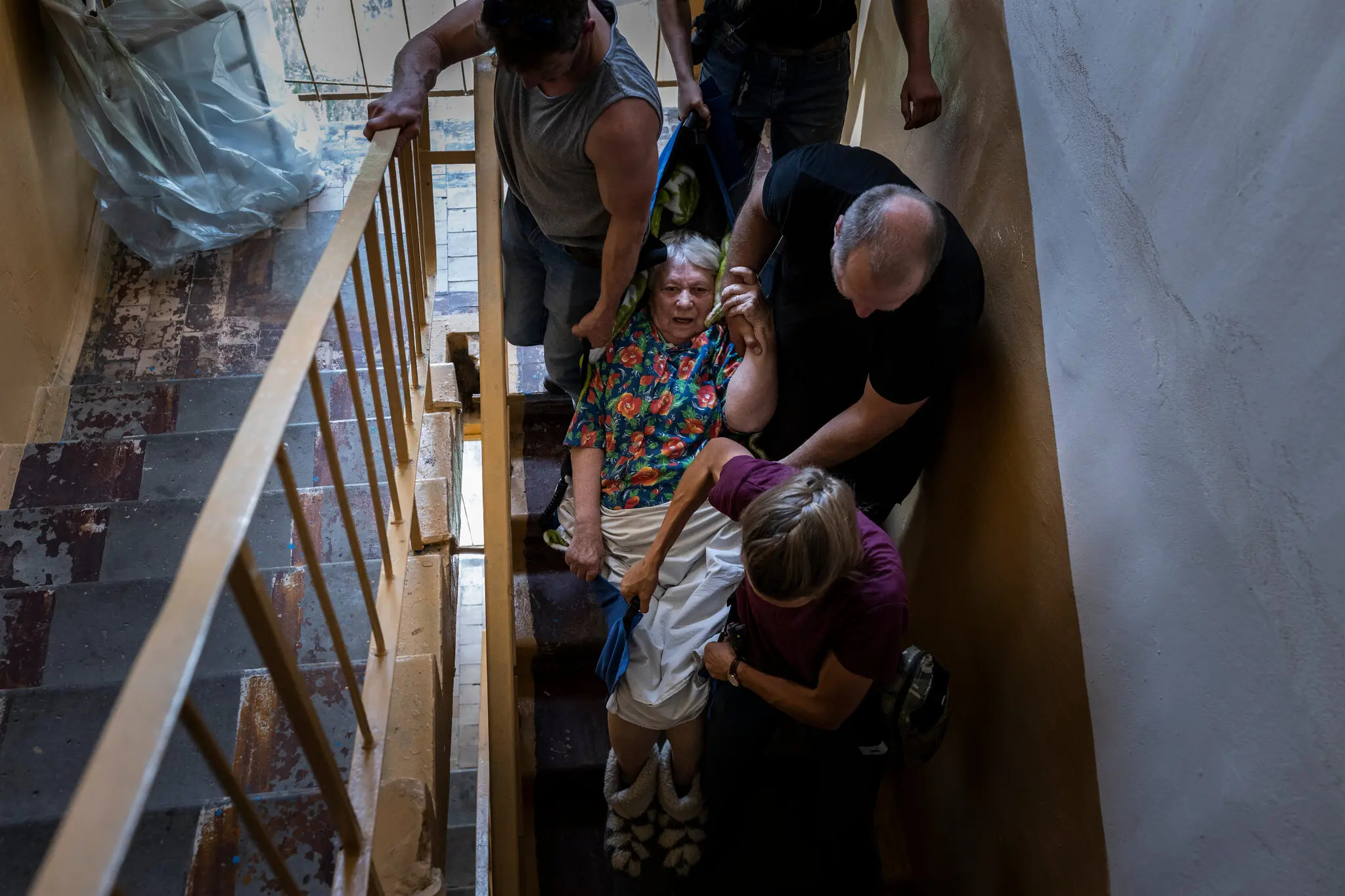 Evacuating the Vulnerable Amid the Terror of War

The sounds of war echo throughout Bakhmut, a largely deserted city in eastern Ukraine, just 10 miles from the front. Even with a trained ear, it is hard to tell what artillery fire is outgoing or incoming.

The terror can be all the more acute for the vulnerable and those unable to care for themselves, among them Zinaida Riabtseva, 77, who is blind and cannot leave her fifth-floor apartment on her own.

As Russian forces bear down with intensifying ferocity in an effort to control the Donbas region, which borders Russia, aid workers are scrambling to evacuate the old, the infirm and the disabled. Those who leave their homes do not know if they will ever be able to return, joining the more than 12 million Ukrainians who have been displaced by Russia’s invasion.

Last week, British and Ukrainian volunteers with the aid group Vostok-SOS were called in to evacuate Ms. Riabtseva, along with her husband, Yuriy Riabtsev. After carefully placing her on a stretcher, volunteers carried her down five flights of stairs, while her husband followed behind with a few pieces of luggage.

Since the invasion began in February, Vostok-SOS has evacuated 15,000 people from eastern Ukraine. On one such evacuation mission, Vostok staff recently drove through back lanes to reach the home of their latest evacuee, Mykhaylo Silichkin. When they arrived in front of his tidy house, he hopped out through the front gate on his crutches, a cigarette perched in his mouth. One volunteer picked up his prosthetic leg. Others carried his luggage. Mr. Silichkin locked the gate as he left, not knowing if he would ever return.

The conflict in Ukraine has also upended the lives of many young people caught in the line of fire. Maria Alefirenko, 31, was paralyzed in a mortar attack during the fighting against Russia-backed separatists in eastern Ukraine eight years ago. On a recent day in Mykolaivka, an aid worker lifted her into a car. Her father, who had cared for her for years, stayed behind. He cried as she left.

Ukrainian officials say that about 80 percent of the civilian population of the Donetsk region, one of the two provinces that make up the Donbas, have already fled. Cities like Bakhmut have become ghost towns, their shops boarded up, their streets deserted but for military vehicles and ambulances zipping through. Some residents who remained behind cook food on campfires in their yards because there is no gas in the city.

But vulnerable people remain, and evacuations continue daily even in frontline towns that face regular shelling.

In Sloviansk, residents who have not left are now at risk from daily artillery and cruise missile strikes, which blow out windows in apartment buildings.

Maksym Sutkovy, a deputy mayor of Bakhmut, said Russian forces were advancing on an arc to the south and east. About 65,000 people had already fled, he said, from a prewar population of about 100,000, and heavy fighting persisted every day.

“We cannot climb into the heads of people,” said Mr. Sutkovy, adding that some residents had stayed behind because they were too poor to move or desensitized to danger after weeks of being bombarded. “People get used to living with explosions,” he said. “What in peaceful times is inconceivable becomes ordinary, everyday.”

So the effort to evacuate the old and vulnerable goes on, even amid the thud of explosions. The departures and displacement provoke strong emotions, as people who have lived their whole lives in one place are finally, sometimes grudgingly, persuaded to leave.

“Now I’m going to a safe place to get better,” said Anatoliy Shevchenko, 73, who was injured in early May.

Valentyna Evtushenko cried as she waved goodbye to her brother Oleksandr Evtushenko, 68, who was being evacuated from a hospital in Sloviansk and transferred to one in Chernihiv, where his nephew lives, in northern Ukraine. Oleksandr, his sister said, “has only me,” adding that they live together in a private house on the outskirts of Sloviansk

Amid painful goodbyes, there are small gestures of comfort.

In Bakhmut, Pavlo Boreyko leaned in close to his 90-year-old father, Petro Boreyko, gently explaining that it was time to go. His father sat on a sofa in front of a woven red carpet hanging on the wall before volunteers carefully slipped a stretcher under him. Incapacitated and no longer able to speak, the elder Mr. Boreyko was carried down the stairs of his apartment building. Once he was inside the minivan waiting below, his son made sure his father was comfortable. Then one of the volunteers placed his cat, in a travel box, beside him.

It was the start of a long journey, including several hours by minivan to the city of Pokrovsk, where Mr. Boreyko was then transferred to an evacuation train that took him to the relative safety of western Ukraine. It was also a journey fraught with danger. Russian missiles have been continuously targeting critical infrastructure across Ukraine and just four days before his evacuation, the depot at the train station in Pokrovsk was hit by a missile strike.

“It is important to show calmness to people even when the shelling starts, otherwise it will be hard to deal with their panic,” said Vladyslav Arseniy, a former construction worker who volunteered to evacuate residents from frontline towns.

Mr. Arseniy said he has been driving on daily evacuation missions and has helped about 700 people leave their homes and find refuge elsewhere.

Mr. Arseniy said he had met many people who refused to leave. Every evening, his group studies a list of people willing to evacuate, dividing them up among evacuation teams. The teams then drive from house to house in the frontline towns and villages, picking up people and bringing them to train stations, where they then head west.

In Bakhmut, there is a particular urgency to work fast as the area is under attack.

Medical evacuation trains are not scheduled every day. On days when there are none, volunteers transport people to a hospital in Sloviansk and evacuate them the next day.

“Why did we have to get used to it?” she asked.