Reanimation package of reforms > News > Interview > European money for reconstruction: on what principles Ukraine will be restored – the economist comments 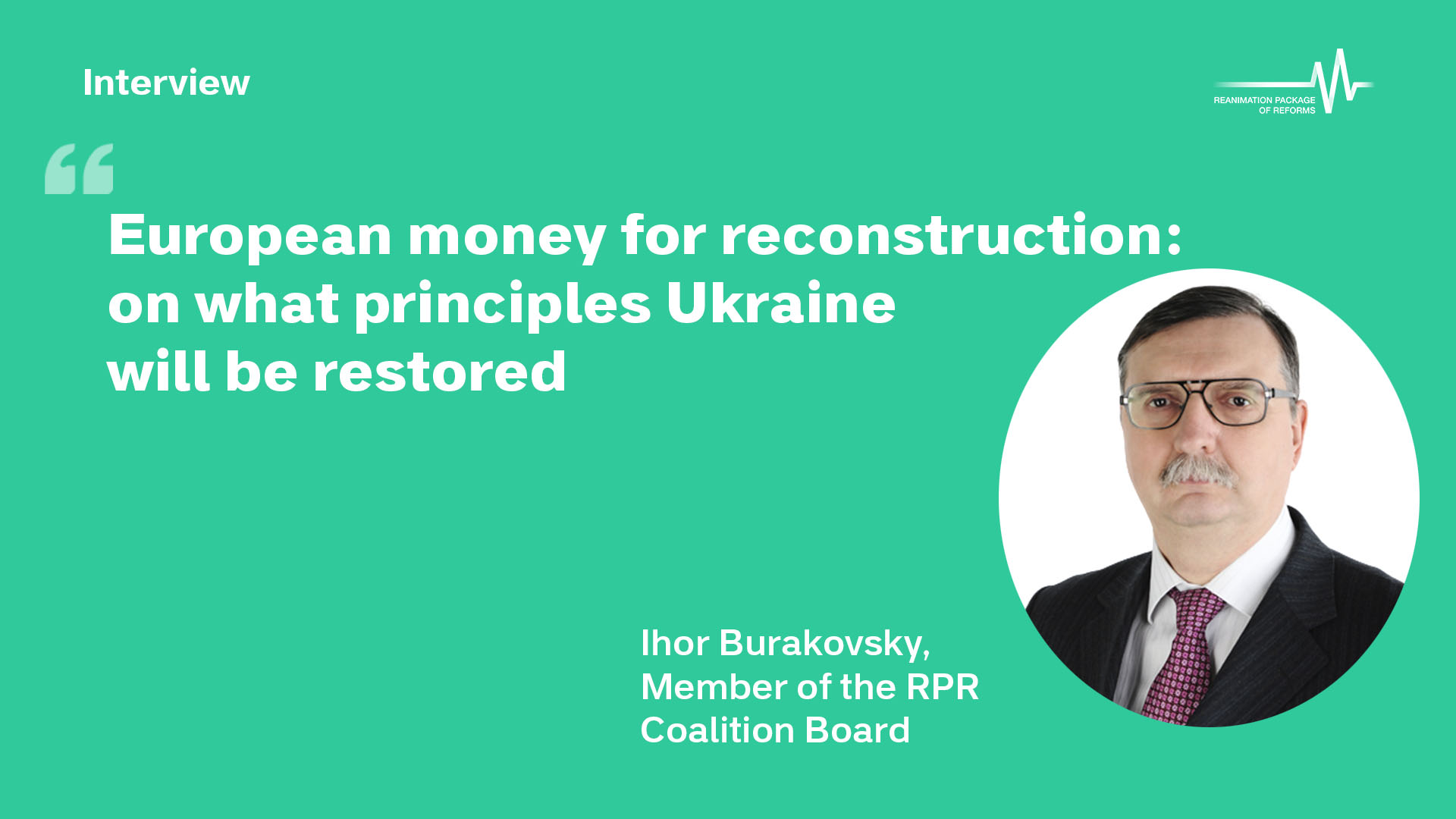 European money for reconstruction: on what principles Ukraine will be restored – the economist comments

How will international financial assistance be distributed to Ukraine, who will be responsible for that, and how will civil society be able to influence the distribution of this money? – Ihor Burakovsky, Doctor of Economics, Professor of the Department of Economic Theory of the Kyiv Mohyla Academy, discussed this on Ukrainian Radio.

How much money will be given for the reconstruction of Ukraine

Today, the most challenging question is how much money we need and how much money we will be given. We can determine that this amount of assistance will depend on how the hostilities in Ukraine end. Priorities and tasks for the decision depend on it. Therefore, I would first talk about our military victories and then move on to economic issues.

About the reconstruction of Bucha

Reconstruction has already begun. Even before the Italian money came, our builders were already working. In the first stage, the money will be used for critical needs. This is, first of all, the restoration of infrastructure, water supply, electricity, sewerage …

The second part is related to how we will restore Bucha: whether it will be the reconstruction of the city, i.e. the creation of a copy of Bucha, or another way to develop this area.

As for public participation in this project, we need to look at the terms of funding. Without the involvement of the public, and not only as a controller, the reconstruction is impossible. People need to express their opinion on what they want, how they want it to be done, and how to make Bucha and other cities a better place for living after the reconstruction.

On targeted use of funds and corruption

Our international partners are aware of the level of corruption in Ukraine. And by and large, corruption has not gone away. They clearly understand how the Ukrainian state works when dealing with big money.

And we are not talking about those cases when such funds are misused. The problem is that we could not utilize the significant funds previously provided by the IMF or the World Bank. It is also a threat to the effectiveness of our reconstruction.

Let’s talk about the implementation of such projects as “Large Construction,” which used the money from the COVID fund. Or the funds allocated to Ukraine for the preparation of Euro 2012. Therefore, this is a tough challenge for the state, society, and donors.

About the pace of recovery

How fast do we need to run? Restoration of our economy after the Russian aggression is a very difficult task. On the one hand, we have lost economic activity, and many people have left their jobs and gone abroad. On the other hand, if people return home, they won’t be able to find a job because businesses are destroyed.

It is now estimated that Ukraine will lose half of its GDP due to the war. To recover, that is, to double this figure, we will need to grow every year by about 15 percent for 5 years. This is a colossal and historically unprecedented task. If we slow down and set a goal to restore economic performance in 10 years, the annual growth rate should be at 7 percent. These are incredibly ambitious tasks, like running a marathon.

On public participation in the process of reconstruction of Ukraine

The tremendous historical task is to turn this energy, aimed at overcoming Russian aggression and fighting the enemy on various fronts, into the power of involvement in reconstruction.

When it comes to local communities, it may be worth returning to forgotten territorial development plans, considering all different kinds of visions in the new circumstances. After all, not all people will return, and we will have a problem with the workforce.

Regarding the use of funds. We were very proud and proud of our Prozorro public procurement system, but unfortunately, there were schemes to circumvent this system after its success. I don’t want our partners to say: yes, you fought well, but you couldn’t use our funds because a group of people has reappeared who are looting in the post-war period and misusing these funds.

And another important point. The public must look at what is being built and how and understand that economic reconstruction means the fight against corruption, the continuation of the judiciary, public administration reform, and many other important things. The public must control the reconstruction process and all changes in policy in decision-making so that they correspond to our steady course to join the European Union.

And civil society needs to generate and implement such initiatives that would help solve not only economic issues. After all, our education system has suffered greatly, so we need a lot of joint work to return to the regular educational process. You may want to look for new non-traditional ways to overcome these problems. Without educated people, it isn’t easy to talk about effective reconstruction and effective country development.

The public is not just a controller. It is not just people who solve problems that the state cannot solve. It is a colossal and inexhaustible reservoir of various ideas, approaches, and intellectual schemes that the government must adopt and implement. Our current situation is a serious intellectual challenge. And obviously, the collective mind is exactly what Ukraine needs now.

Ihor Burakovsky, Member of the RPR Coalition Board, Doctor of Economics, Professor of the Department of Economic Theory of the Kyiv Mohyla Academy, discussed this on Ukrainian Radio