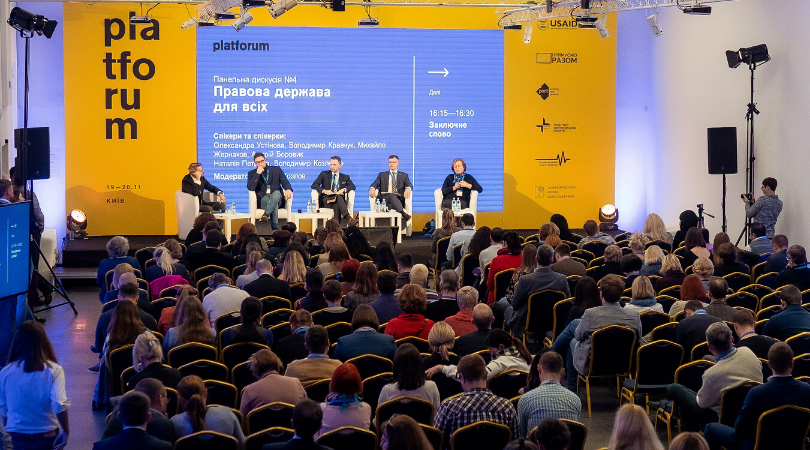 Politicians and leaders of NGOs discussed mechanisms for establishing sustainable dialogue and cooperation to carry out high quality reforms in Ukraine. On November 19-20, PlatForum participants discussed the opportunities for cooperation and reform priorities in the areas of public administration, economy, humanitarian development and European integration.

The cooperation of the authorities and civil society as a driver of reform is the key to positive changes for improving the well-being of Ukrainians. Cooperation with regional organizations as initiators of local change is one of the functions of the Reanimation Package of Reforms Coalition, stated Ihor Burakovskyi, Co-chair of the RPR Coalition Board. Do we need synergy between government and the public?

Representatives of civil society have been involved in decentralization, electoral and land reforms, which is why consistency and institutional memory are the key to a sustained dialogue between the government and citizens. Oleksandr Kornienko, the First Deputy Chairman of the “Servant of the People” Parliamentary Faction, sees the RPR Coalition as a mediator between the government, the public sector and business in public dialogue. Without such a dialogue, the Ministry of Communities and Territories Development of Ukraine will not function properly, agreed the Minister Aliona Babak. The Parliament is responsible for the administrative-territorial reform, but long-term regional development plans are impossible without public participation. The Minister promised to involve civil society experts in the working groups to discuss the draft decisions: “The government does the homework and then brings it up for the discussion.“ Forms of sustainable dialogue for civil society are working groups under the committees of the Verkhovna Rada and the Cabinet of Ministers, as well as quarterly communication with the leadership of the Parliament and the government. “Previous authorities have made mistakes in communication with the public, because open dialogue between the first and second round of the presidential elections is too late,” stressed Yulia Kyrychenko, RPR Coalition Board Co-Chair.

The basis of the economy is trust, not money?

The government abandoned the idea of ​​growth areas when one or more industries were considered the engine of the economy. The MP from the Servant of the People faction, Roksolana Podlasa, mentioned 3 components of economic growth: demonopolizing the economy, stimulating competition and supporting small and medium-sized enterprises. Demonopolization is not only about the proper work of the Antimonopoly Committee, but also about the abolition of state monopolies. “Some state-owned enterprises have benefits, for example, renting premises for 1 UAH, while a private entrepreneur pays a market price,” she explained. Civil society plays 2 roles in the economic sphere: expertise and control over the actions of authorities. The current government has the political capital to make unpopular but necessary reforms: a liberal model of the land market, privatization of state-owned enterprises and the establishment of fair rules for business. “Civil society should be an interface between the government and other stakeholders while maintaining a controlling role – not all competitions for public office are conducted in a transparent and fair manner,” said Hlib Vyshlinskyi, Executive Director of the Center for Economic Strategy.

The basis of the economy is trust, not money. Then people invest money and unite capital for investment,  said co-founder of the Greencubator NGO Andriy Zinchenko. Institutions are the basis for confidence of businesses. But in Ukraine there is still a problem of ownership formalization: “We are still a post-Soviet country without clearly defined property; there is no complete land cadaster and e-registers of property.“

No poor country has turned into a rich one with a huge social burden. This also applies to Ukraine, which has 40% of state budget expenditures on the social sphere, added CASE Ukraine Executive Director Dmitry Boyarchuk.

Is reform a startup?

Today 1002 (ATCs) have been created out of the planned 1356, but it covers  42% of the country, said Olena Shuliak, Deputy Chair of the Verkhovna Rada Committee on State Building, Local Governance, Regional and Urban Development. The government rejects the principle of voluntary amalgamation of territorial communities. In the first priority is the functional capacity of the community, not the ability to amalgamate voluntarily. “ATCs will receive UAH 7.7 billion according to the State Budget for 2020. But the function of local government should not be limited to financial requirements. ATCs need to understand the local needs that they can address with the help of the government ”, stressed Olena Shuliak. In a key reform for Ukraine – the civil service – the form is dominated by meaning: people often do not understand why they are working in public office. The head of the National Agency for Civil Service Oleksandr Starodubtsev drew attention to this. Civil society, rather than authorities initiates reform, because reform is a startup. For example, the ProZorro public procurement system started out as a small startup for the public, and the startup always gives the right to make mistakes. “The ProZorro system only started on the third attempt – two previous projects failed. If this was done by the authorities, the officials would have to explain the reasons for the failures to the police,” stressed Mr. Starodubtsev. Is there a lack of judges in Ukraine?

Obstacles to establishing the rule of law in Ukraine are instability and unclear legislation, says Natalia Petrova, the Deputy Head of the USAID New Justice Program . “The issue of access to justice is not only a matter of physical access to a court, but also an alternative to resolving disputes, such as mediation. In Ukraine, mediation services are ready to be provided by public organizations”, Petrova said. According to her, 20% of judges are “superfluous” in the state, given the average workload of one judge. The opinion of the Supreme Court Judge Volodymyr Kravchuk strongly disagrees with this opinion : “There is a catastrophic shortage of judges in Ukraine. As of now, in 9 courts there are no judges at all. There are thousands of vacant judicial positions now.” Significant emphasis in this reform is put by the public on updating the judges’ corps, because people are the main focus, said Mikhail Zhernakov , Co-founder of the DEJURE Foundation and coordinator of the Public Integrity Council. The High Qualification Commission of Judges of Ukraine and the High Council of Justice did not cope with their task of selecting honest judges, therefore. So now the focus is on rebooting these bodies.

“The bright side of the reform is the launch and selection of candidates to the High Anticorruption Court. We want to extend this success story to the entire judicial field,” Zhernakov summed up.

De–occupation is a humanitarian issue, not a purely military one

The gap between Kyiv and the Donbas frontier areas is tremendous: some frontline settlements do not have access to medical care, water and food. This was brought to the attention of Oleksandra Dvoretska, Coordinator of the Office for the Development of Humanitarian Policy, a former expert of the RPR Coalition. “For 5 years, the occupation was considered a purely military issue, but there was a gap not only with the occupied, but also with the frontline territories,” says Dvoretska.

For years, humanitarian policy has been given to a group of nationally-oriented intellectuals. That’s why it was formed separately from the general public, says Oleksandr Sushko, Executive Director of the International Renaissance Foundation.

Another important issue is secondary and higher education. It is the schoolchildren who can point out the necessary changes in the school curriculum, such as the lack of important subjects for the modern world, said MP Roman Gryshchuk, Member of the Parliamentary Committee on Education, Science and Innovation (Servant of the People faction). Now, before choosing a particular university, the child is mostly influenced by parents, but instead the Ukrainian Academy of Leadership offers an annual program to help a child better know himself/herself and the world. “This is a conscious decision to choose the path of life, and at the same time UAL does not compete with schools and universities,” says Roman Tychkivskyi, CEO of the Ukrainian Leadership Academy. Since 2014, the European Union has funded 300 projects worth € 63 million to support civil society in Ukraine, said Matti Maasikas, Head of the EU Delegation to Ukraine. Ambassador assured the participants of further EU intentions to support Ukraine financially and politically.

Susan Fritz, Director of the USAID Mission in Ukraine, Belarus and Moldova, stressed the key role of civil society in reforming Ukraine, in particular in countering Russian aggression. Now the speed of change from the new government needs public support.