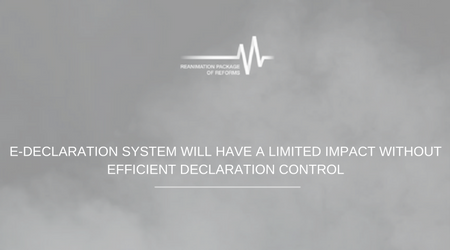 By launching a system of electronic declaration and monitoring of property, revenues and expenditures of public servants in September 2016, Ukraine has made a huge step in the fight against corruption. It was this reform that played a key role in making the final positive decision by the EU countries to grant Ukrainians a visa-free regime. In particular, thanks to the introduction of electronic declaration, Ukraine also improved its position in the Transparency International Corruption Index by two points (from 27 to 29).

At the same time, unprecedented levels of transparency revealed an unexpectedly high wealth of officials, which irritated Ukrainians and astonished international partners. A year ago, civil society representatives warned that without further verification of electronic declarations and prosecution for unreliable information, the results of the reform could cause frustration in society, and the declaration system from a key anti-corruption tool would turn into a problem.

For one year of functioning, the National Agency for Corruption Prevention (hereafter – NACP) conducted a full inspection of only 80 of more than one million electronic declarations. Out of these, only three cases were referred to law enforcement agencies for criminal investigation due to declaring false data or illegal enrichment. One case concerns an administrative offense. The reason for this low efficiency is not only technical problems, but, first and foremost, deliberate political blockade of this reform by the state authorities, including the President of Ukraine and the structures under his control.

The existing procedure for full verification of electronic declarations, which was developed by the NACP and agreed by the Ministry of Justice of Ukraine for a long time, is ineffective in comparison with the initial proposed option, since it involves formalized, burdened with unnecessary elements of the procedure that prevents the introduction of an effective system of automated verification. Verification of declarations in such order will not bring the expected results.

Thus, according to the existing procedure, the NACP is required to verify the authenticity of only declared information, and not all the property to be declared. Also, in accordance with rules, the NACP is required to complete the verification within a specified period (maximum 90 days), even if no response to requests for verification of certain information has been received. The order also forces the NACP to “manually” check all declarations in which automated control has detected at least one risk, and also narrows the use of important risks during automated analysis of declarations.

It is significant that in the year of its operation, the NACP was not able to access the state registers and databases required for the automatic verification of e-declarations. In addition, now the Agency’s access to its own register of declarations is in manual mode and is complicated as the system is controlled by the State Enterprise “Ukrainian Special Systems”. The latter belongs to the sphere of the State Service of Communications, which in August 2016 refused to provide a certificate of compliance with the system of electronic declaration, which almost stopped its launch. For further use, the module for automatic verification of electronic declarations also requires the approval of the State Service of Communications and obtaining a certificate of conformity. The State Enterprise “Ukrainian Special Systems” also blocks the prompt correction of the electronic declaration form, which significantly complicates the verification process.

Taking into account the above-mentioned, the Anticorruption Group of the Reanimation Package of Reforms calls on the highest state leadership to ensure the independence of the NACP and the proper functioning of the e-declaration system as well as the NACP to ensure the fulfilment of its statutory responsibilities. Therefore, it is urgent:

The experts also appeal to the international partners of Ukraine as a whole, and the European Union in particular, with the call to closely monitor the reform, which is, in particular, Ukraine’s commitment to the EU within the framework of the macro-financial assistance package, and demand its full implementation, and in case of sabotage – full reloading of the Agency itself and the competition committee, selecting the Agency members. Ukrainians are tired of the “preparatory” process and expect tangible results of the fight against corruption right now. An effective system for verifying declarations and prosecuting violations should be one of those results.