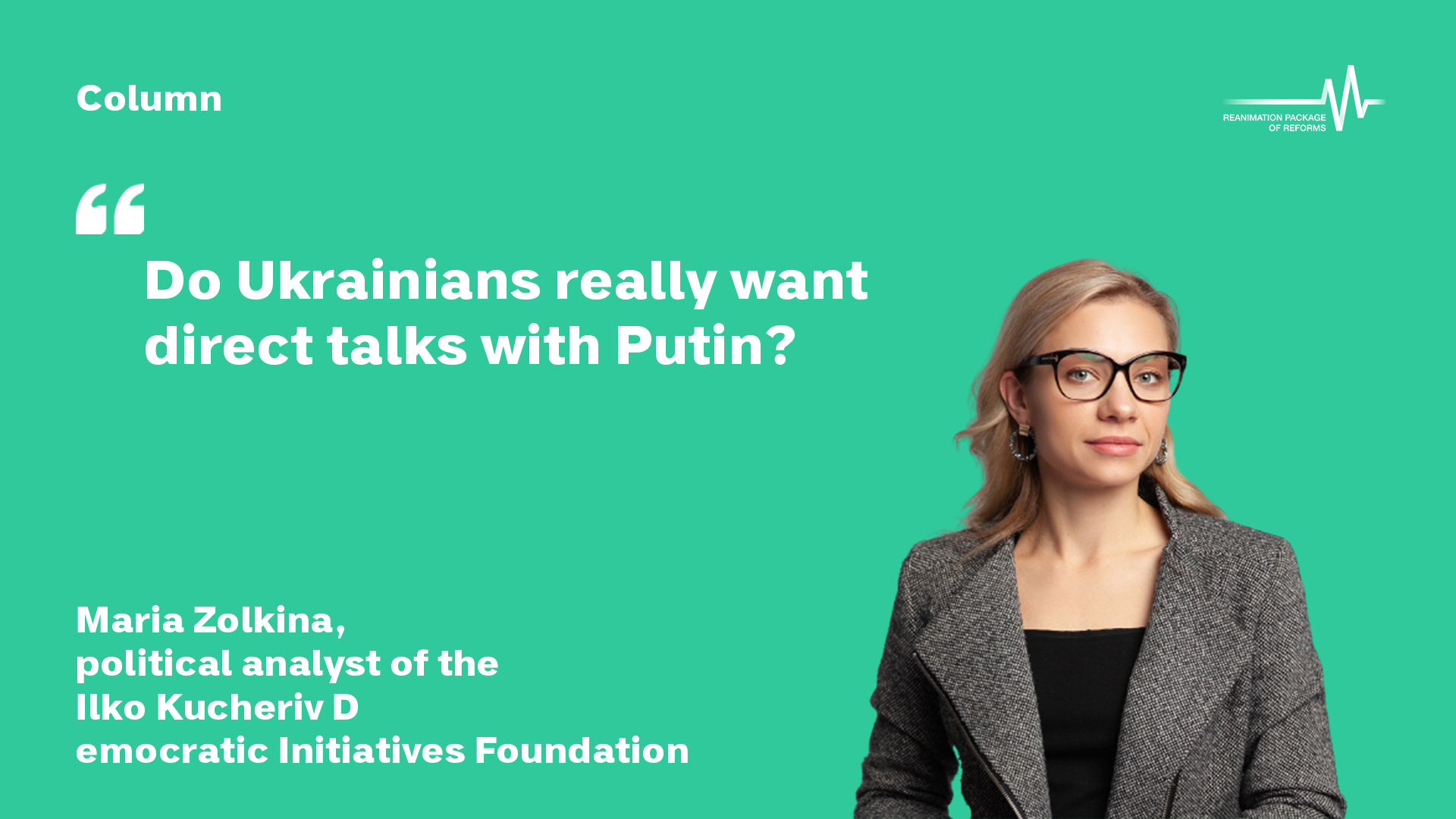 56% of Ukrainians support direct talks with Russia for the sake of settlement in Donbas. This is exactly the news that “touched” most of the media after the publication of a  social survey by the Rating group. Against the background of the threat of a new Russian invasion, the talks between Putin and Biden, as well as alarming signals that Ukraine will be forced to make concessions with a “special status” for Donbas, these figures need special attention.

Are Ukrainians really “for” a tete-a-tete conversation between Kyiv and Moscow? And does this mean carte blanche to Volodymyr Zelensky, who recently declared his readiness to do so?

No, not everything is so simple. And behind this 56%, there is no agreement at all between Ukraine and Russia without mediators, and certainly not a “green light” for Zelensky.

And here’s why. When sociologists ask, “Do you support direct talks with Russia on resolving the conflict in Donbas?” It would seem that so because they are asking about direct negotiations? But in such cases, we always look at the “test,” i.e., other questions.

And in the same poll of the Rating, among the various proposed formats of negotiations, only one in five supports direct talks with Russia. And the most popular were and remained negotiations through international mediation. Yes, 45% – for the Normandy format plus the United States and Britain, another 11% – for the current Normandy Four. Well, Ukraine’s direct dialogue with the occupying power, which Russia is so persistently pursuing, has a minimum of 12% support compared to other options.

In August of this year, the Ilko Kucheriv Democratic Initiatives Foundation asked in its study: what if there is no agreement on peace in Donbas in the near future? What actions would Ukrainian citizens support?

And public opinion was divided between different options, but only 18% of respondents were ready to continue negotiations at the cost of new concessions from Ukraine.

About the same number (19%) supported the resumption of negotiations only if Russia demonstrated its willingness to make concessions. One in five (22%) believed that negotiations should be reduced exclusively to humanitarian issues and coexistence with the occupied territories. Another 13% would be ready to suspend negotiations altogether.

Therefore, even direct negotiations can be different in content. And among the 56% who agree, there are those who support negotiations if Russia also makes concessions and those who tolerate such negotiations only for humanitarian issues (release of prisoners to facilitate the lives of people in the occupied territories), and there will be those who are ready for any -what concessions from Ukraine.

People understand direct negotiations differently and can approve them for different reasons.

On the other hand, in general, the search for compromises has remained the most popular way out of the conflict since 2014, but most citizens believe that it is not possible to agree to any compromises.

And the same logic applies to the format of negotiations. That is, it is necessary to negotiate with Russia, but not without international mediators.

Earlier this year, just against the background of spring escalation on our borders, in another study of the Foundation, we asked respondents how, in their opinion, how the lasting peace in the Donbas can be achieved? Similarly, direct dialogue with the so-called “L / DNR” or with Russia and concessions to them in the form of special status for Donbas or “exchange,” so to speak, peace in Donbas in recognition of the annexation of Crimea did not have widespread public support.

And these trends continue to this day. If there is an alternative, citizens choose safer, so to speak, options. And in the case of negotiations, these are international formats where dialogue with Russia is conducted, but with witnesses, not alone.

Therefore, the “magic” 56% of support for direct talks with Russia is melting in front of our eyes if we look at what citizens actually prefer.