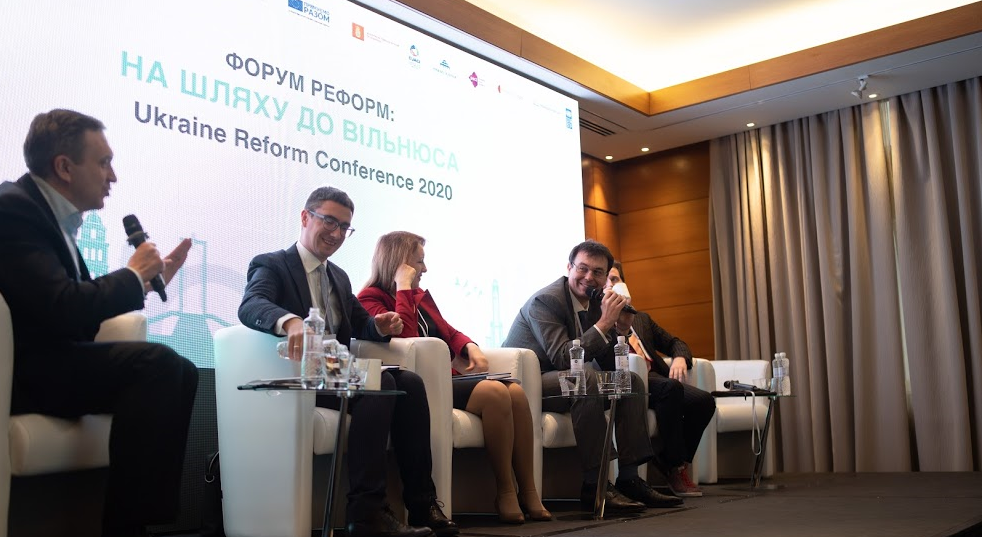 Will the authorities be able to protect the interests of the state, not the oligarchs? Why does the shadow business in Ukraine have advantages over white? What will be the market gas price for the population? The speakers of the Reforms Forum: On the Road to Vilnius spoke about this during the second panel discussion. Economic growth: how to improve the business climate and well-being of citizens?

Equal rules for everyone?

Ukraine has been experiencing slow economic growth since 2016. Most economic decisions made by the past did not have significant gaps but lacked confidence in macroeconomic stability and rule of law. However, the new government has made progress in the area of ​​macroeconomic stability in the first six months. As Executive Director of the Center for Economic Strategy Hlib Vyshlinsky reported. “The hryvnia has started to strengthen and prices have stopped rising. It can be the basis for economic growth”, as he said.

Strengthening the hryvnia increases public confidence in the national currency. If bank deposits in hryvnia increase, the interest rate and the cost of loans may decrease. According to Vyshlinsky, the key issue is the ability of the authorities to protect the interests of the state, but not individual oligarchs.

“The position of the authorities is demonstrated by the case of PrivatBank. We will see if equal rules of the game will be created for all, or whether the influence on the power of one oligarch on others will change, ”- said the executive director of CES.

According to him, there is no significant progress in judicial reform. But disputes between business representatives, as well as businesses and the state often end up in the courts. Also, business is still not protected by law enforcement agencies, in particular the SBU.

“The government should reduce GDP redistribution through the budget and review budget expenditures as a whole”,- as the expert concluded.

Is Fair Business Possible in Ukraine?

Tax-avoiding businesses deriding the honest businesses that carry the entire tax burden. There is virtually no advantage to a white business compared to a shadow business, Nadiya Berdychuk, Supervisory Board Member of Ukrainian Business Council; Executive Director of Ukrainian Association of Direct Sales, said. According to Chairman of the Verkhovna Rada Committee on Finance, Tax and Customs Policy Danylo Hetmantsev, 45% of the Ukrainian economy is in the shadows. “It is difficult for businesses to enter the market without tax evasion schemes today. The white business is uncompetitive compared to the shadow business’,- said the MP.

In order to destroy corruption schemes in the non-banking financial sector, the Verkhovna Rada adopted a law on “split”. Parliament passed a law on the electronic check, which has caused some business representatives to indignant, aimed at shading the economy. And soon the tax holidays will be submitted to the public for discussion, as Hetmantsev announced.

The existence of parallels between Lithuania 30 years ago and Ukraine now, in particular with regard to land reform, was spoken by Davydas Vitkauskas, EU-Justice Project Manager. But if Lithuania sought to leave the USSR for the return of property rights to the population 30 years ago, then in Ukraine there is still a debate in this area. Registers are an important element of land reform. This issue is very poorly regulated at the legislative level in Ukraine.

“Most of the state agricultural land is not registered at all. Also, it is partially rented or sublet, so it will be very difficult to collect all the information in a single register”,- noted Vitkauskas.

Many agricultural lands are controlled by government bodies that have nothing to do with agricultural business, the expert concluded.

We attract investments, we create markets

The Government’s goal is to increase GDP by 40% over the next 5 years. This is possible due to a significant increase in investment. The First Deputy Minister of Development of Economy, Trade, and Agriculture of Ukraine Pavlo Kukhta spoke. “It is necessary to create key markets for factors of production: normally functioning labor and capital markets, a transparent land market”, – said Kukhta.

The bill on the land market that was approved in the first reading does not establish the most liberal model, but the fact of launch will be a significant step forward. After that, the market model can be more liberalized.

“The total list of privatizations is about 1000 enterprises, the sale of which can bring to the budget $ 5 billion”, – summed up the Deputy Minister.

Ukraine is one of the most energy-efficient economies in the world. But this deficiency has great potential for investment, said Deputy Minister of Energy and Environment of Ukraine Oleksii Ryabchyn. Already concluded energy service contracts for a total amount of UAH 640 million – 2.5 times more than in the previous 3 years. The state also allocates UAH 2-3 billion a year for energy efficiency, but the population knows almost nothing about it due to lack of communication, said Ryabchyn.

“The Government plans to introduce a green loan program in pilot mode from 2021 to 2025”,- as he announced.

The volume of renewable energy production has doubled due to the restimulation of the industry over the past year. But before that the energy systems and related industries were not ready, the Chairman of the Verkhovna Rada Committee on Energy and Housing and Communal Services Andrii Herus emphasized. Market launch: what can Ukrainians expect?

Ukrainians have been receiving gas for market prices, noted DiXi Group President Olena Pavlenko: “The market is the choice of suppliers. Considering that the Ministry of Economic Resources is pleased to offer wide sales in the market”. The price of “blue fuel” will increase by 20% after launching the gas market, Chairman Andrii Herus predicted.

According to him, the supplier will lay in the gas price the risks of non-payment of some consumers. Andrii Gerus does not anticipate the emergence of new players immediately after the market launch with regard to the number of gas suppliers.

A unified environmental control system needs to be put in place and legal accountability for environmental violations strengthened. After all, often the issues of the economy go against the environment. As summarized by Olena Kravchenko. “Parliament will adopt a law on waste management this year”, – as Oleh Bondarenko promised, chairman of the Verkhovna Rada Committee on Environmental Policy and Environmental Management. He also announced the preparation of a new Subsoil Code.