Reanimation package of reforms > News > Columns > Dependence on a neighbor: why Ukraine’s accession to the EU is tied to Moldova and vice versa 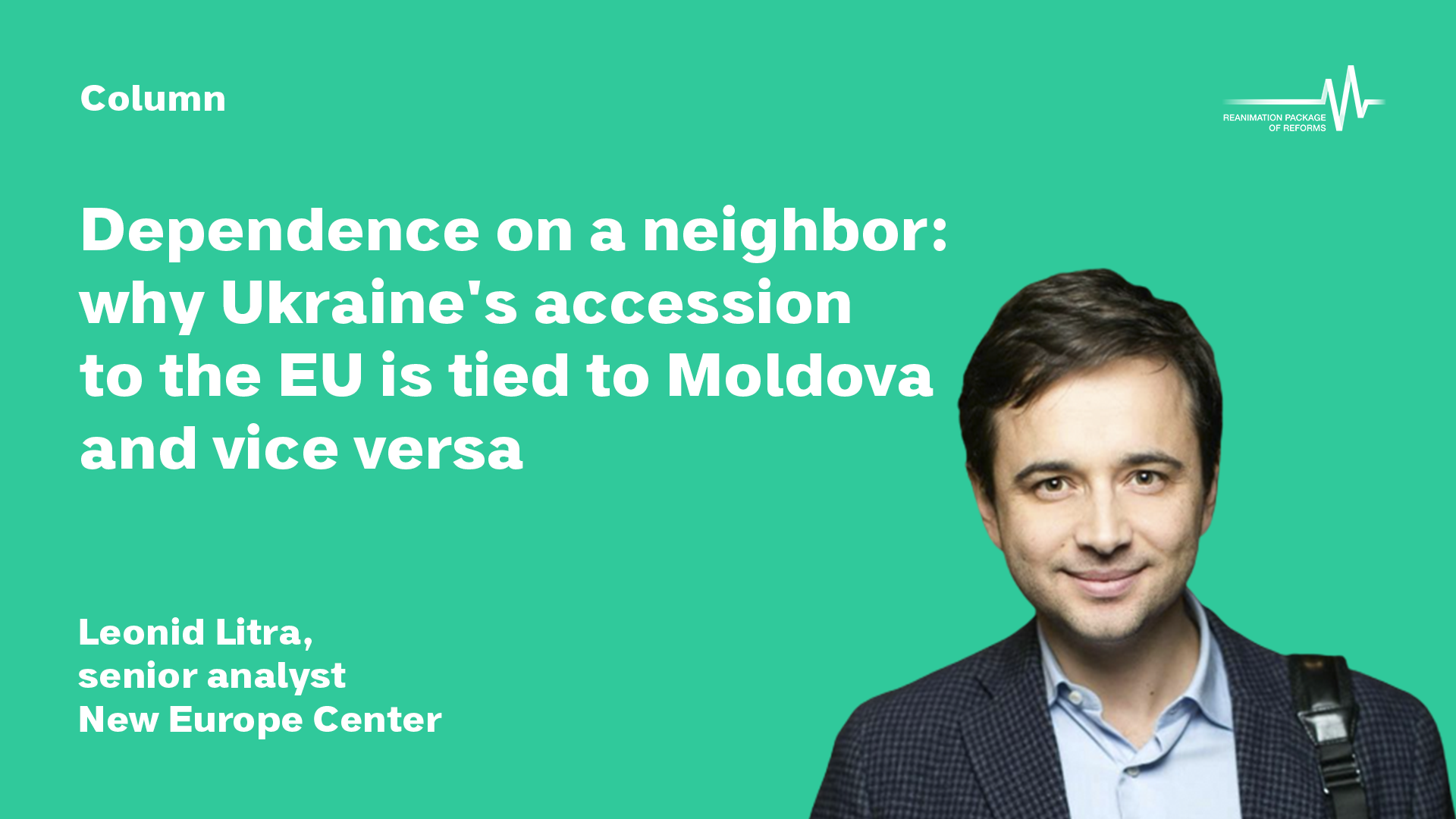 Dependence on a neighbor: why Ukraine’s accession to the EU is tied to Moldova and vice versa

The process of accession to the EU, in addition to the regulatory and reform dimensions, is a unique combination of creative mechanisms capable of both slowing down and speeding up this process.

The granting of candidate status to Ukraine and Moldova is undoubtedly the most positive process that has taken place in the region in recent years. However, at this stage, both societies as a whole and the governments lack an understanding of what this status entails.

Even though the governments of both countries have sought EU membership for a long time, they were mainly unwilling to “eat the main dish on the EU menu” after obtaining candidate status.

That is why the governments of Ukraine and Moldova are looking for a holistic approach in their EU accession strategy. However, regardless of how professionally Kyiv and Chisinau will be able to build their accession policy, they should take into account the experience of previous EU enlargements and the pitfalls that may appear in the accession process.

Obstacles on the way to the EU

The experience of the Central European and Baltic countries is often the main reference point in the accession process, especially in terms of speed and quality of reform implementation (at least at the time of accession).

However, today the most relevant experience for Ukraine, Moldova, and, I hope, Georgia is the Balkan case, which, unfortunately, may not be too inspiring for Kyiv and Chisinau. However, it most realistically reflects what Ukraine and Moldova will have to face.

The EU recognized the prospect of Balkan membership in 2003. However, it took many years before North Macedonia, Montenegro, Albania and Serbia gained candidate status, while Bosnia and Herzegovina and Kosovo are still potential candidates.

Next year, 2023, will mark 20 years since the Balkan integration process began, and only Croatia managed to become a member of the EU.

For the rest of the countries of the region, the process has stalled on both sides.

The promise of membership no longer inspires confidence because it has not led to anything for many years, as well as reforms in individual Balkan countries.

Therefore, states lose interest and pretend to carry out reforms while the EU pretends to integrate these countries. This is reminiscent of the old Soviet joke: “We pretend to work, and you pretend to pay us.”

Confidence in the admissions process has weakened for many reasons.

Having received the status of a candidate for EU membership, Ukraine and Moldova, despite their different “weight” categories, are now connected through the accession process.

Examples of the integration of the Balkan countries show that such interdependence can be both a weakness and a strength.

Albania and North Macedonia were ready to start EU accession talks, but a historical dispute between Skopje and Sofia stalled the process. Due to Bulgaria’s veto on the start of North Macedonia’s negotiations with the EU, Albania remained hostage to this dispute until a possible solution was found through the mediation of France.

Montenegro, which is considered to be generally ready for accession, is also trying to open the closed door to the EU. However, in this case, the European Union itself shows its unwillingness to accept new members.

The need for internal reform of the EU has become even more evident with the increasing divergence of views among member states, especially on decisions that require unanimity.

In Western capitals such as Berlin and The Hague, one can often hear the frustration that some of the countries that joined the EU during the big enlargement of 2004 (then 10 countries joined at once;  the “big bang ” enlargement ) do not share the same values ​​as the countries of “old Europe”.

The latest example is the sixth package of sanctions against Russia, which Budapest did not support.

Therefore, as explained by high-ranking officials from the EU, often in the person of President Macron, the European Union does not want to accept new members until it reforms itself and becomes a reliable entity. Acceptance of new members, according to them, can further harm decision-making in the European Union.

In advocating the granting of candidate status, Ukraine and Moldova mostly played their own game. However, this strategy brought few positive results.

One of the important principles of EU enlargement is good relations between neighbors. Therefore, for the sake of joining the EU, Ukraine and Moldova will have to find a common denominator and reduce misunderstandings to a minimum.

The same applies to relations with other EU member states, which, if they wish, can block the accession process.

While our two countries are connected in the process of integration, we will move forward only if both Ukraine and Moldova do their homework well.

So at this point, both countries should be interested in moving forward together and synchronizing their agenda.

Ukraine’s political weight has increased, and the EU has become more flexible on a number of issues that previously seemed difficult to change: the abolition of quotas on some goods; accelerated integration into the EU energy market; acceleration of integration in the transport sector, etc.

However, despite the primary importance of reforms, the strategic framework of the accession process should also be considered.

As long as the countries integrating into the European Union will not be considered “one of us” in the EU, there will still be a serious moral boundary that will harm this process.

For many EU countries, the union ends at the border of Poland and Romania. This is the problem on which Kyiv and Chisinau will need to work together. Also, Poland and Romania can potentially become promoters of our countries in the EU – Ukraine and Moldova, respectively, but on the condition that they themselves do not have problems with the European Union.

If you work hard, you can change all the differences in perception.

Ukraine and Moldova should synchronize their EU accession agenda.

At the same time, synchronization should not be perceived as both countries being in the same basket, otherwise they could become hostages of each other, as it was with Albania and North Macedonia.

This would mean that instead of moving forward, countries would actually hold each other back.