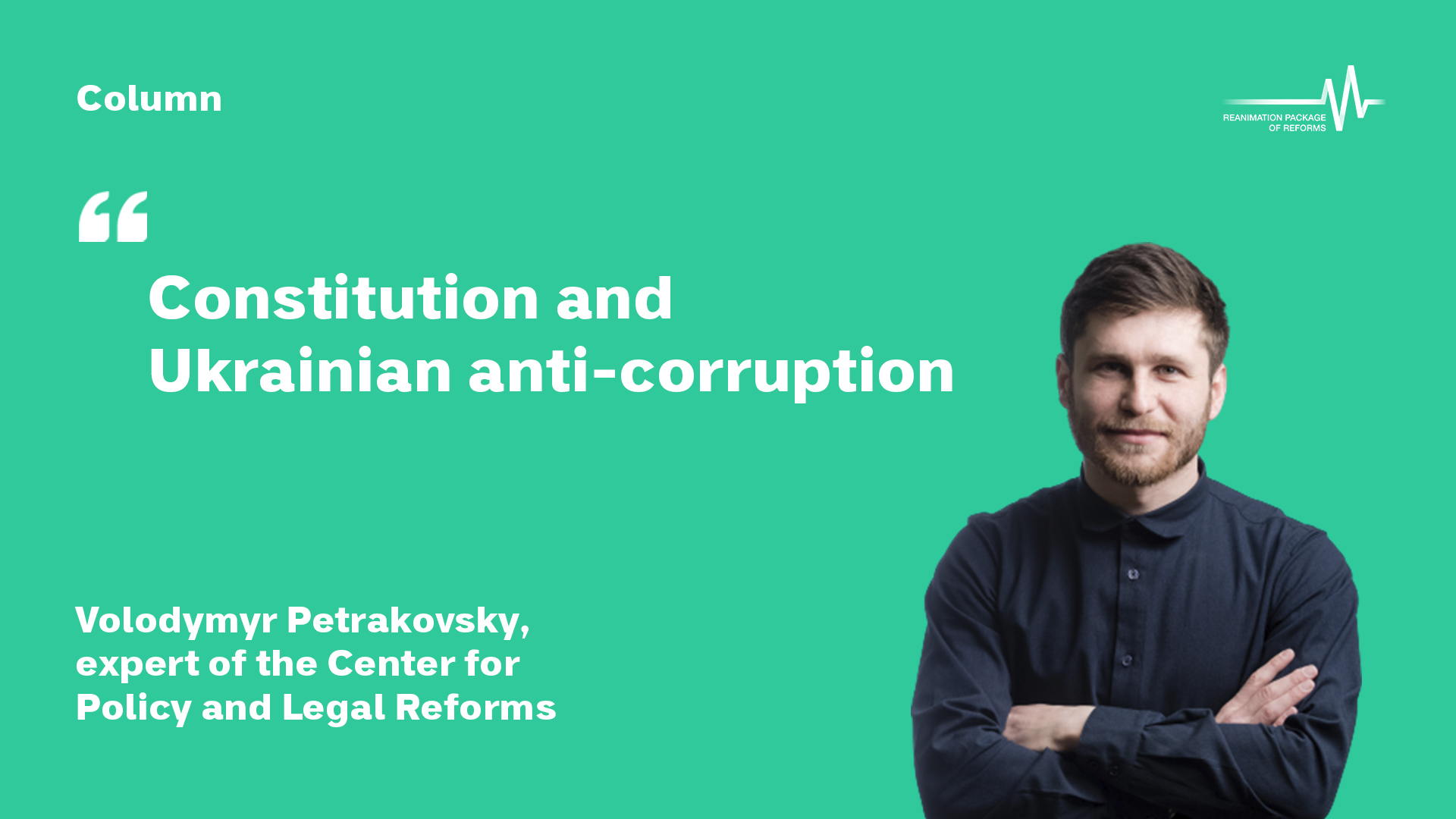 The President has appointed a “new” director of the State Bureau of Investigation. Just before the New Year’s greetings to the country.

But don’t wonder who that is. It doesn’t matter much. Instead, we should consider what this means for the Constitution and why we talk Ukrainian anti-corruption here. That is something to be concerned about.

NABU law as a precedent for the President

The events began in 2014, before adopting the NABU Law: parliamentary lawyers warned  MPs and reformers that the text of the future law contains several unconstitutional provisions. In particular, the President should appoint the NABU director, and the body itself is formed in an incomprehensible status and outside the system of executive bodies. This warning is ignored, the law is adopted as defective; after competitive procedures, President Petro Poroshenko issues a decree on the appointment of Artem Sytnyk.

In June 2019, the Constitutional Court issued a judgement in the case of the National Commission for Regulation of Economic Competition. For attentive observers, the decision is a signal: the Court is ready – and quite severe – to show the President and Parliament where are the constitutional limits of their powers. It is the argumentation from the decision in the NECR case that will become the “flesh and blood” of the NABU cases and the appointment of Artem Sytnyk, as in the NECR law the Parliament has laid down similar defects.

Attempts to legalize the NABU Law

However, before the Court makes the expected decision in these cases, yesterday’s anti-corruption activists, who became part of President Zelensky’s team, are taking a step to “fix” the obvious mistake of 2014. This step was the presidential draft law “On amendments to the Constitution” № 1014  – so that the authority to form NABU and appoint the heads of NABU and SBI appeared in the text of the Constitution and were assigned to the President. The fact that the project was aimed at “legalizing” the formation of NABU and the appointment of Artem Sytnyk by presidential decree was not even hidden. For example, during the consideration of the draft in the Constitutional Court, the representative of the President Fedor Venislavsky stated ( my highlight –  VP ):

However, the President of Ukraine, as well as the Verkhovna Rada, must act exclusively on the basis, within the powers and in the manner prescribed by the Constitution of Ukraine, including in the process of forming public authorities, is explicitly stated in the legal position of the Constitutional Court, formed in the Decision of 15 September 2009 and 13 June 2019 (the case of [NECR]).

The decision of the Constitutional Court

However, this did not happen, as President Zelensky’s team expected, and the draft law №1014 was not adopted, as the Constitutional Court issued a negative opinion about him. The Court noted that the indirect subordination of NABU and SBI to the President through the appointment and dismissal of leaders would not only threaten the independence of these bodies, but would also lead to the concentration of executive power in the President; in turn, this could upset the balance of constitutional powers between the President and the Cabinet of Ministers, effectively creating a parallel executive branch subordinate to the President; as a result, the concentration of power, including the combination of functions that do not belong to certain bodies of state power, will weaken the constitutional guarantees of rights and freedoms; since the separation of powers is the main means and indispensable condition for preventing the concentration of power, and therefore an instrument against its abuse for the adequate realization of rights and freedoms.

That is, at the end of 2019, it was already clear to everyone that part of the NABU Law and the decree on the appointment of Artem Sytnyk is counting down the last days. This is what happened in the second half of 2020: first the decree, and immediately afterward – the very pro-presidential provisions of the NABU Law were declared unconstitutional.

And then… “nothing happened.” More specifically, progressive politicians and anti-corruption activists have persuaded international partners to pretend that the decision on the unconstitutionality of the decree appointing Artem Sytnyk means nothing and does not change anything legally. Defective legal relations can remain defective in any case, even a serious conflict with the Constitution. To put it simply, in their opinion, Artem Sytnyk should remain in office until the term of office given to him by the unconstitutional decree expires.

The creators of this position probably thought that denying the consequences would have no consequences.

Appointment to the SBI: history repeats itself

Instead, it set a precedent for President Zelensky on the eve of the new year, 2022. That is, given the “progressive anti-corruption position”, he appointed a new director of the SBI contrary to the Constitution. After all, despite the assurances of his representative in the Constitutional Court that the President does not have such powers, he understands that appealing his decree “in the new realities” will not have any legal consequences; that his chosen one should remain the head of the SBI for as long as he was appointed (5 years in this case). And no matter that he did not have the authority to do so, he instead has a reliable alternative – this is a precedent from NABU.

I suspect that progressive politicians and anti-corruption activists will now appeal to the fact that in any case, the “bad” director of the SBI can be fired by Parliament: under the SBI Law or simply (as was the case with the first SBI director Roman Truba). At the same time, constitutional matter, as always, hides “surprise” for such attempts to rationalize defective decisions.

Today the Constitutional Court is at the final stage of review of Roman Truba’s constitutional complaint. He challenges the provisions of the law, which prematurely terminated his powers as director of the SBI. The Court’s ruling in favor of Roman Truba will mean that the first SBI leadership was dismissed unconstitutionally. Reasons to expect such a solution are given not only by the above-mentioned decisions and conclusions of the Constitutional Court but also by the recent decision  № 4-r (II) / 2021. In it, the Court stated that the Verkhovna Rada “doesn’t have a right to dismiss an individual employee or certain categories of employees and inform them of possible future dismissals.”

As a result, there is little comforting news for the Constitution: the mechanism for implementing the decisions of the Constitutional Court remains broken, and the Court itself is working surprisingly slowly; at the same time, the President adopts defective decrees quickly and generously, and his team does not lack people capable of innovative proposals, the implementation of which will take years.

These are the years when the SBI will play a prominent role.

Volodymyr Petrakovsky, expert of the Center for Policy and Legal Reforms