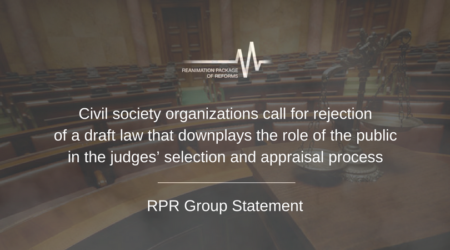 On November 17, a revised draft law No.6593 amending Article 87 of the Law of Ukraine “On the Judiciary and Status of Judges” was registered in the Parliament. It concerns the procedure for the formation and operation of the Public Integrity Council (hereafter – the PIC). As early as on December 20, the text of the document will be reviewed by the Verkhovna Rada Committee on Corruption Prevention and Counteraction.

Should draft law No.6593 be adopted, the powers of the current members of the PIC will be terminated and so will be the public participation in the process of judges’ selection and evaluation as the draft law contains a number of regulations that make the PIC dependent upon the High Qualification Commission of Judges of Ukraine (hereinafter – the HQCJ).

The draft law stipulates that the rules of the PIC activity shall be established by the High Qualification Commission of Judges of Ukraine, which will also be able to dissolve the PIC and exclude its members through its resolution.

The author of the draft law proposes to conceal information about dishonest judges from the society and publish the PIC opinions only if they are supported by the HQCJ. It is worth reminding that over 60% of negative opinions were rejected at the Supreme Court competition. Under such a rule, Ukrainian society would have never found out about the facts of dishonorable behavior by 76 candidates, including by 30 competition winners.

Also, draft law No.6593 abolishes the possibility of membership in the PIC for lawyers, former judges and persons belonging to other public councils. Such a rule prevents professionals, whose experience is essential for the effective and competent operation of this body, from becoming potential PIC members.

According to the final provisions of the draft law, the PIC members shall lose their powers on the day of entry into force of the respective law, while the HQCJ shall announce the new selection. The possibility of being re-elected to the PIC is prohibited. The law shall come into force on its signing. This means that all members of the current PIC are losing their powers and are deprived of the possibility of being elected. Civil society organizations would like to reiterate that it was because of the opinions of this composition of the Public Integrity Council that the participation in the competition of more than 50 candidates, whose integrity had been reasonably called into question, was terminated. The President of Ukraine has repeatedly emphasized the role of the PIC. It has been highly appreciated by both national and international experts and organizations. Obviously, such a position of the current PIC does not appeal to those who do not want real cleansing and renewal of the judiciary. Therefore, this draft law can be considered a reprisal against the members of the public who have demonstrated their independence and efficiency. Probably, it is very important for those who stand behind this draft law to have PIC under their sway before the start of the new qualification assessment and new competitions, in particular, to the Anti-Corruption Court.

Civil society believes that the current members of the Public Integrity Council should exercise their powers until the expiration of their tenure, and the role of the Public Integrity Council in the selection should be strengthened rather than reduced. They view draft law No.6593 as an attempt to downplay the participation of the independent public in assessing the integrity of the judges and to get the process out of public control.

In this regard, the public calls on the Verkhovna Rada Committee on Corruption Prevention and Counteraction to recommend the Parliament to refrain from including in its agenda draft law No.6593 reducing public participation in the process of selection and appraisal of judges.

Centre for Democracy and Rule of Law (CEDEM)