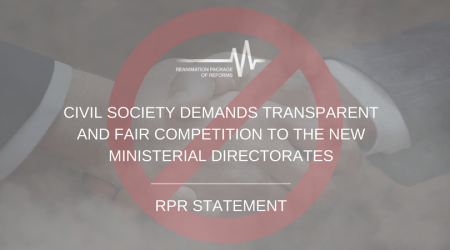 Public administration reform is one of the top priority reforms for Ukraine because it creates institutions that can carry out all other reforms. Finally Ukraine has a chance to build a modern, compact, highly professional, transparent and efficient system of governance instead of the post-Soviet, post-colonial government – large, slow-moving, inefficient, bureaucratized, full of temptations and opportunities for corruption, oriented at executing orders from above instead of searching and implementing innovations. In order to be successful, the reform must change all components of the management system at the same time: people, structures, processes, values.

The government has launched the pilot phase of the reform – structural and staff upgrade of ten ministries, the Secretariat of the Cabinet of Ministers, the National Agency on Civil Service and the State Agency for E-Governance that are expected to attract the best professionals who will become leaders of change. The new directorates, to which reform experts are being recruited, will be responsible for the development of public policy – analysis and identification of the best approaches to country development in specific spheres, strategic planning and implementation of reforms. Vacancy portal career.gov.ua has already announced over 100 vacancies for new positions in the civil service: general directors, heads of expert groups and government experts. The first competitions will be held in October.

We, representatives of the civil society, strongly support the launch of public administration reform and believe that its successful implementation is vital for Ukraine. Moreover, it is Ukraine’s last chance to take advantage of the opportunity window that opened thanks to the Revolution of Dignity.

But, like any other reform, this one is under threat. It is a threat of a silent sabotage, depreciation, disparagement of the idea and nullifying the unique opportunity for reform due to the resistance of the bureaucratic and corrupt system.

We are confident that the new directorates will need to attract new highly qualified reform experts who will be able to bring tangible change. We are aware of the many risks that may accompany the contests for new positions: creating artificial barriers for the people from outside the system, promoting candidates from bureaucratic and corrupt clans, deliberate withdrawal of strong reform experts who can endanger the corrupt system. Examples of unsuccessful or partially successful reforms of other institutions enable us to state that there will be a lot of attempts of this kind in the future.

Therefore, we declare our firm intention to control the transparency and objectivity of the competition for the vacancies of reform experts in the ministries. On our part, we have already suggested ministries a number of experts in the relevant policy areas to participate in the selection committees. We will also systematically monitor the work of the selection committees, send our observers and report to the public by all available means the progress and the results of the competition, particularly its openness, transparency and compliance with all the advanced requirements to the competitive procedure – involvement of independent experts, video recording, etc.

We demand that the ministries and, in particular, state secretaries of the ministries who will chair the selection committees, ensure openness of the process and facilitate the presence of public experts and observers during the competitions. We will subject to severe public condemnation any attempts to sabotage the public administration reform.

We call on non-government organizations to join us in exercising vigilant control of the competition, thus protecting the chance for enabling effective governance in Ukraine.

Center for Political and Legal Reforms