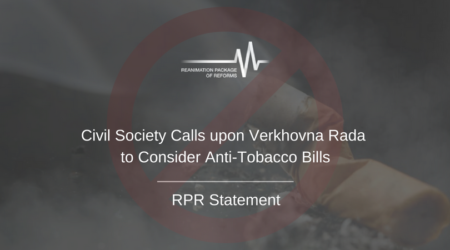 The Parliament of the eighth convocation neglects the issues of public health and in particular of tobacco control. Such a situation is unacceptable as the tobacco industry constantly uses new tactics towards the youth and sells new products on the market. The inaction of the Parliament is also an evidence of ignoring obligations under the EU Association Agreement as no single step towards an approximation of the national legislation to EU standards in tobacco control has been taken since 2014.

Tobacco control draft laws No. 2820 and No. 4030а, have been waiting for the first hearing for over two years. The draft law No.2820 “On amendments to certain Laws of Ukraine concerning public health protection from the harmful impact of tobacco” adopts high standards of protection from tobacco through the implementation of Directive 2014/40/EU and ensures further implementation of the WHO Framework Convention on Tobacco Control (FCTC). The document received the endorsement from the Ministry of Health of Ukraine, WHO, the World Bank and the European Commission, and it is also recommended for the adoption in the first reading by the Health Care Committee and by the Office of the Vice Prime Minister for European and Euro-Atlantic Integration Ivanna Klympush-Tsintsadze.

The fact that the consideration of the bill No. 2820 is delayed and neglected in the Parliament indicates the deliberate blocking which proves the significant influence of corporate interests of the tobacco industry on public health policy. This issue also may be considered at the session of Cluster 6 of the Sub–Committee on Economics and Other Industrial Cooperation of Ukraine and EU Association Committee, planned for June 26, 2018.

Reanimation Package of Reforms (RPR) emphasizes on the need to find a reasonable compromise with the members of parliament – opponents of the bill No. 2820 in the Tax and Customs Policy Committee, who registered another bill No. 2430-d, presented as “revised”.

The Healthcare Reform Group at RPR draws attention to the problem of bill No. 2430-d that is considering issues of public health as purely technical regulations of tobacco products supervised by the Tax Committee. NGOs and experts have also drawn public attention to a fact that MPs – authors of the bill No. 2430-d – have previously advocated for the interests of the tobacco industry. Such situation contradicts international obligations of Ukraine in Article 5.3 of FCTC, which requires parties to protect public health policy-making from commercial and other vested interests of the tobacco industry.

Whereas, the experts of the RPR Healthcare Group call upon the Parliament: