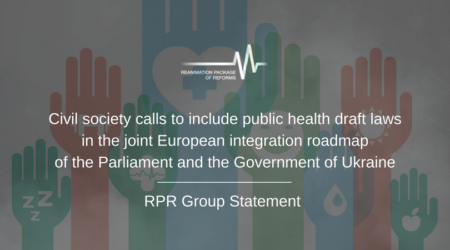 Meanwhile, both draft laws, No.2820 on protection against harmful effects of tobacco and No.2386a-1 on transplantation, were not included in the roadmap of the priority bills in the field of European integration for 2018-2019.

This contradicts the position of Vice Prime Minister for European and Euro-Atlantic Integration of Ukraine Ivanna Klympush-Tsyntsadze, along with Chairman of parliamentary Healthcare Committee Olha Bogomolets and Acting Minister of Health Dr. Ulana Suprun, who stressed the importance of including these draft laws into the roadmap of priority European integration bills during a joint meeting on February 9.

Experts of Healthcare Reform Group at Reanimation Package of Reforms emphasize that the adoption of bills No.2820 and No.2386a-1 is an important step for the implementation of Chapter 22 of the Association Agreement between Ukraine and the European Union.

Draft law No.2820 “On Amendments to Certain Laws of Ukraine on Protection of Public Health from Harmful Effects of Tobacco” implements the provisions of the Directive 2014/40/EU. In particular, the draft law provides for the ban on flavored cigarettes, increases and updates graphical warnings on the harmful effects of smoking, introduces rules for the sale of electronic cigarettes and herbal mixtures, reveals the composition of tobacco products and prohibits tobacco advertising on the Internet.

Draft Law No.2386а-1 “On Amendments to Certain Legislative Acts of Ukraine on Transplantation of Organs and Other Anatomic Human Materials”, which has been prepared for the second reading for over a year now, envisages harmonization of the Ukrainian legislation with the provisions of the Directive 2010/45/EU.

Ignoring European integration bills in the field of public health demonstrates that the authorities are not ready to introduce essential legislative changes that would increase Ukrainians’ life expectancy and save thousands of lives from premature deaths.

In view of this, RPR Healthcare Group calls on the Government and the Parliament to include in the roadmap for the implementation of the Association Agreement public health draft laws No.2820 and No.2386a-1.