Reanimation package of reforms > News > Statements > Civil Society Calls on the MPs to Exclude Norms Blocking the Activities of the Public Integrity Council from the Draft Law No. 7441 on the Launch of Anti-Corruption Court 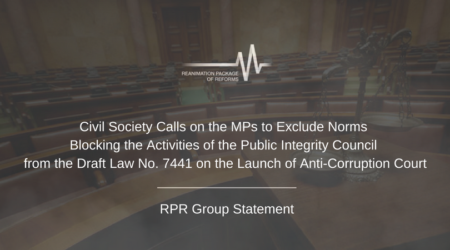 Civil Society Calls on the MPs to Exclude Norms Blocking the Activities of the Public Integrity Council from the Draft Law No. 7441 on the Launch of Anti-Corruption Court

On June 21, the Verkhovna Rada adopted presidential Draft Law No. 7441 on amendments to the Law “On the Judiciary and Status of Judges” in the first reading following the adoption of the Law “On the High Anti-Corruption Court”. The draft law contains a number of provisions that are not relevant to the launch of the anti-corruption court, but considerably undermine the public’s participation in the selection and evaluation of judges.

In particular, it is assumed that the members of the Public Integrity Council must be physically present at its meeting, and any resolution must be adopted by a majority of its general composition. This makes it impossible for the Council to work online, which has been its permanent practice, as well as work in boards, which is envisaged by the current law. Under the current conditions of the qualification evaluation of about 5,500 judges, as well as the need to analyze hundreds and thousands of candidates for the new courts, adoption of such standards equals removal of the public from the judicial reform processes.

In the matters of clearing the judiciary, level of public trust in the representatives of the public is six times higher than that in the judges from the judiciary bodies. The President himself has on several occasions stated that the public should become the watch-dog in order to prevent the employment of unscrupulous judges. Therefore, the President’s proposal to significantly reduce the role of the public in judicial reform seems inconsistent, to say the least.

Moreover, such legislative provisions can negatively affect the mediation procedure between the High Qualification Commission of Judges and the Public Integrity Council with respect to interaction during qualification evaluation.

Experts of the RPR Group on Judicial Reform consider the practice of adopting regulations that contradict the public request for strengthening the role of the public in the judge selection procedures to be unacceptable.

Accordingly, the public calls on the Committee on Judicial Policy and Justice to exclude provisions of the Draft Law No. 7441 that create significant obstacles in the activity of the Public Integrity Council in the process of the draft law finalization for the second reading.