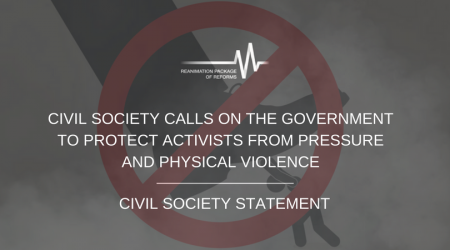 On the 4th anniversary of the beginning of the Revolution of Dignity, a new wave of physical abuse and pressure on civic activists and whistleblowers fighting with the old political system, swept over Ukraine.

Only last week, two more high-profile incidents took place. On November 22, in Poltava judge Larysa Holnyk and her husband Ihor Havrylenko were beaten. The judge is famous for revealing corruption of the city mayor Oleksandr Mamay. She has publically released a video where the city chairman attempted to “reach an agreement”  on ceasing  administrative proceeding on corruption against him. The case has not reached the court yet, while Ms. Holnyk is under constant pressure from Oktyabrskyi district court’s administration and the High Council of Justice for her strong position on this issue.

Unfortunately, this is not the only case of physical  abuse against civic activists in the Poltava region. On April 5 this year, a fight between civic activists and the so called “titushkas”, who protected  illegal construction in the historic center of Poltava, took place. Six people were injured. Among them – ATO veteran and civic activist Oleksandr Coba, who received 6 stab wounds. Following these events, several other civic activists have received threats. These cases testify that the use of a terror tactic performed by criminals becomes the new norm for corrupt officials and businessmen they are allied with.

The same situation is observed in Odesa. Local authorities and businesses intend to build up an area in Shevchenko city garden, the Summer theater. In June 2017,  local Odesa authorities issued a permit to build a shopping mall on this territory. The construction company has ties with Volodymyr Halanternik, business partner of the city mayor Hennadiy Trukhanov.

On November 18, citizens of Odesa took to the streets in order to protect the park. A number of fights occurred during the protest and on November 24 eco-activists were arrested for 60 days: the Head of NGO “Street Front” Demian Hanula and his colleague Serhiy Sternenko. They protested against the construction of the park and participated in the street action in the city garden. Both are incriminated with the organization of mass riots, although the above said activists are only two of the many organizers of the street action of November 18th.

Prior to these events, other cases of physical violence occurred. In particular, an activist of NGO “Green Leaf” Svitlana Pidpala was beaten. . She participated in protests against the destruction of green zones and building up the Black Sea coast in Odesa.

In addition to Poltava and Odesa, cases of violence occurred in Kharkiv, and the pressure on journalists was observed in Rivne. It is important to note that these are not merely individual cases but an established system of pressure, threats and physical violence against the civil society. Moreover, the said system is functioning with the silent consent of law enforcement bodies and local governments. Meanwhile, none of these high-profile cases received proper attention of the President of Ukraine. Civil society actors in Kyiv and the regions became an object of persecution by the corrupt officials and opponents of democratic reforms, while  the responsible state agencies and highest level officials prefer not to notice that. Therefore, civil society coalitions from across Ukraine call on: