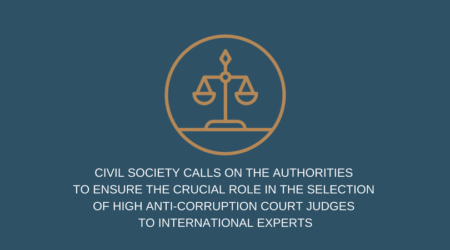 In the run-up to the final voting for the law draft “On the High Anti-corruption Court” No. 7440, experts of the Anti-corruption Group of Reanimation Package of Reforms once again emphasize crucial importance of the final draft law to meet all the requirements of the International Monetary Fund, which are in line with the recommendations of the Venice Commission.

RPR believes that entrusting international experts with the crucial role in the selection of anti-corruption judges is absolutely crucial. Civil society experts stress unacceptability of any legislative suggestions aimed at depriving international experts of the right to veto candidates unfit for the positions of High Anti-corruption Court judges. At the same time, we support establishing candidates’ right to appeal negative conclusions of the Public Council of International Experts (PCIE) regarding their adequacy for respective positions, provided that previous negative conclusions are reversed by the majority of the PCIE members’ votes.

The requirement to give the crucial role in the selection of anti-corruption judges to the international experts fully meets expectations of the Ukrainian society. In particular, according to the survey conducted by Democratic Initiatives Foundation in the early 2018, 41% of Ukrainians would prefer entrusting Western experts with the formation of the High Anti-corruption Court, while only 10% of the population trusted the existing government authorities in charge of selecting judges.

In view of this, Anti-corruption Group of the civil society coalition Reanimation Package of Reforms calls to include in the law draft law “On the High Anti-corruption Court” the following provisions: