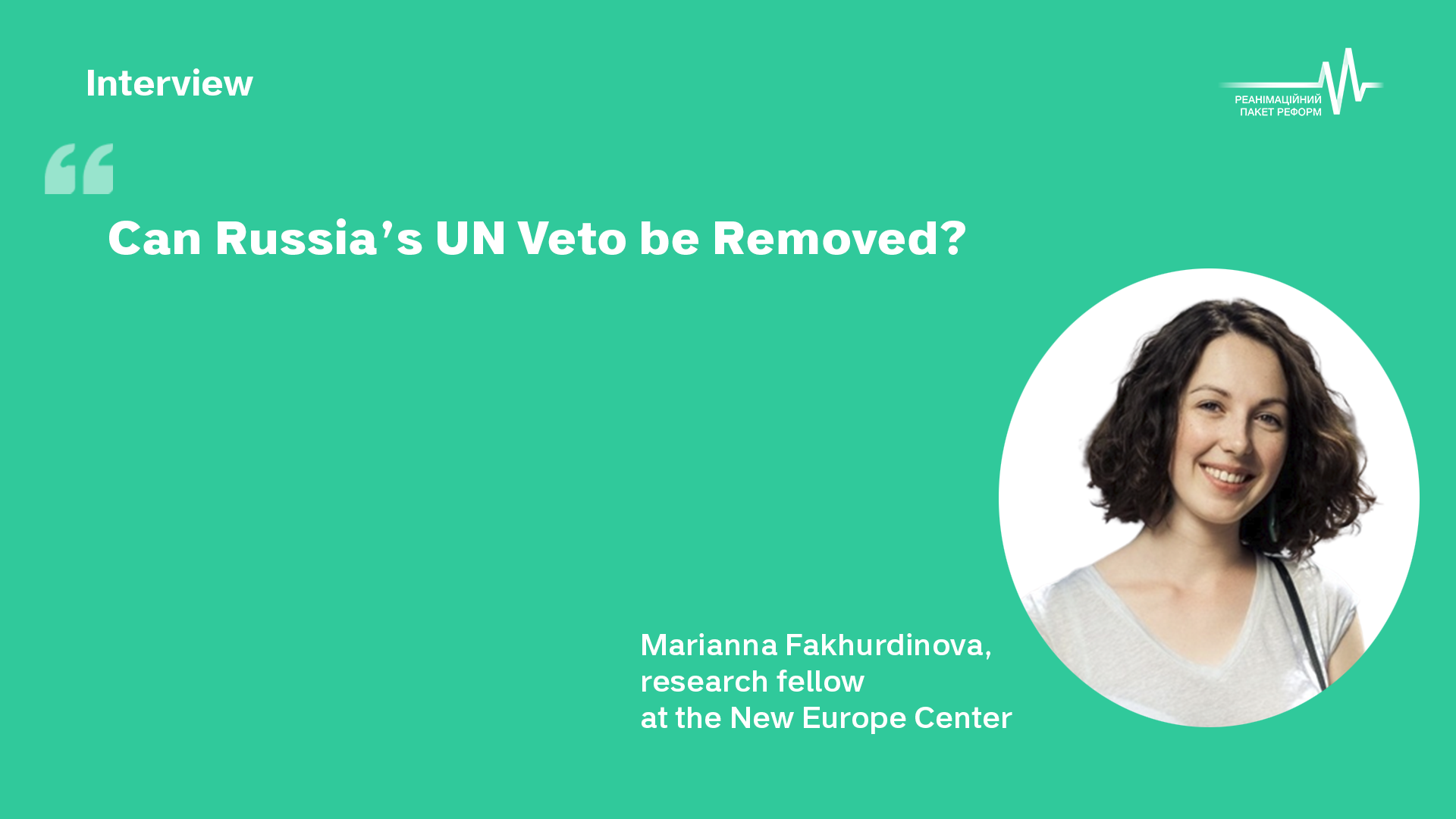 Can Russia’s UN Veto be Removed?

A key reason the UN is limited from intervening in the war in Ukraine is because Russia remains a permanent member of the UN Security Council and can veto any resolution dealing with the conflict if it does not support its own interests.

Marianna Fakhurdinova, a research fellow at the New Europe Center, told IWPR’s Svitlana Morenets how Ukraine was exploring creative ways to deprive Russia of its this veto power.

IWPR: How did Russia acquire its position within the UN Security Council?

Fakhurdinova: After the collapse of the Soviet Union, the Russian Federation declared itself to be its legal successor. The country demanded the right to be represented in the UN security council instead of the Soviet Union and to receive the power of veto. However, this was not done according to any official UN procedure.

Back then, President Boris Yeltsin sent a letter to the UN secretary-general, saying that the Russian Federation was the legal successor of the Soviet Union. This was somehow enough for Russia to become a permanent member of the UN security council; other countries were satisfied with the fact that the collapse of the Soviet Union took place more or less peacefully and that only Russia claimed to be its rightful successor.

The proper way to do this would have been to go through the formal procedure of joining the UN. Two-thirds of UN members have to vote for this at the general assembly, for example as they voted for accepting the Czech Republic and Slovakia into the UN after the collapse of Czechoslovakia.

Also, according to the UN charter, membership in the organisation is open to all “peace-loving” states that shall refrain from the use of force and obey international law. If the Russian Federation were to apply to join the UN now, it would fail to meet these criteria.

This provides a basis on which Ukraine can today say that the Russian Federation is illegally present not only in the UN security council but also in the UN in general.

Why do only five countries have the right to veto?

The five permanent members of the security council – the US, the UK, France, China and Russia – can veto any resolution. They received this right as countries that won WWII and possessed nuclear weapons.

When deciding how the new world order would look after WWII, these countries composed the UN charter according to their interests. Therefore, the UN charter does not prescribe the expulsion of a permanent member from the security council. The UN was created, in a way, as an organisation protecting these five countries’ interests.

What strategy has Ukraine chosen to accomplish its goal of depriving Russian of its veto power?

The UN charter does not prescribe any procedure by which its five permanent members can be deprived of their veto power or even expelled from the security council. There is no legal mechanism for it. Therefore, we are looking for various creative ways to block the Russian Federation’s veto power.

The path Ukraine has chosen is to prove that the Russian Federation joined the UN security council illegally. Ukraine has been developing this since 2014, but the topic began to be promoted more actively after the full-scale invasion.

Yet in this context there is the following challenge. Russia was part of the UN security council for 30 years, voted for hundreds or even thousands of resolutions. If it is recognised that Russia was in the UN security council illegally, what should be done with all these documents? Consider them invalid or to leave everything as it is? There are many questions regarding this scenario, but still this process is the most potentially feasible to implement.

What other ways are there to influence Russia’s position in the UN security council?

How have other countries responded?

At first, other UN member states did not respond much [to Ukraine’s efforts]. But during the last month, we saw that this initiative began to be supported more actively. A shift has begun only at the level of discussions, but this is already a positive signal for Ukraine.

Different countries have different positions. The US is talking about reforming the UN Security Council. Also, they have proposed that the permanent members of the UN retain the right of veto, but have to report to the general assembly as to why they use it. In practice, this does not give us anything. Russia will keep talking about how Ukraine “oppresses the Russian-speaking population” and further propaganda to justify itself.

The president of the European Council, Charles Michel, has a tougher position on this issue – he called on the UN to exclude the Russian Federation. The prime minister of Japan, Fumio Kishida, demands internal reform of the UN security council. Turkish president Recep Tayyip Erdoğan said that Russia should be deprived of veto power, but remain in the UN.

At the same time, it is necessary to understand that each UN member state primarily pursues its own interests. The question of the reform of the UN security council has been around since the second half of the last century. Germany, Japan and Turkey all claim a permanent seat in the UN security council. Thus it is not only the war in Ukraine that pushes the discussion on the reform of this institution.

If the right to veto is taken from Russia, how can UN resolutions help Ukraine?

The countries that help Ukraine with weapons and sanctions against Russia are mainly the EU and the US, while many states, for example, in Africa or Latin America, either support Russia or take a neutral position.

Also, suppose Russia is excluded from the UN security council. At least at the political level, it will be made clear that an aggressor country cannot claim the title of a superpower and cannot remain unpunished. This will be a political signal that any country, even powerful, can’t do whatever it wants.

This publication was prepared under the “Ukraine Voices Project” implemented with the financial support of the UK’s Foreign, Commonwealth, and Development Office (FCDO).