Reanimation package of reforms > News > Columns > “Big reboot”: what to expect from the new format of relations between Ukraine and the United States 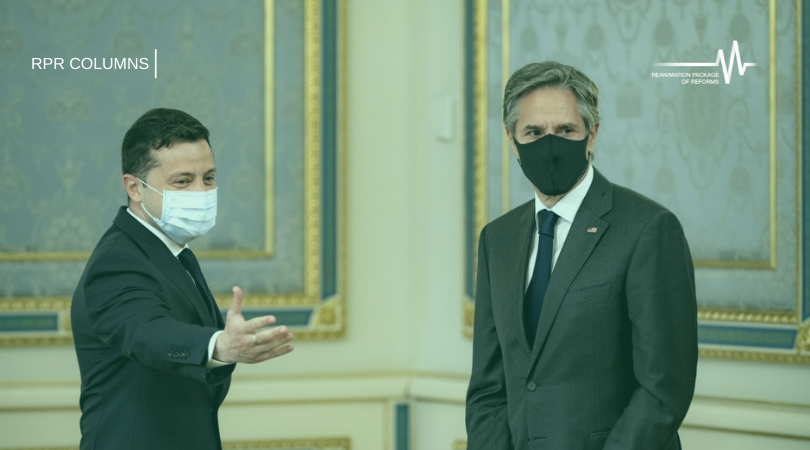 “Big reboot”: what to expect from the new format of relations between Ukraine and the United States

Thus ended the cycle of essential ritual events needed to restart relations between our states.

In less than ten months after Biden’s inauguration, the presidents of Ukraine and the United States spoke four times, including Zelensky’s long-awaited visit to the White House.

Contacts at the lower level also intensified: the US Secretary of State, the Pentagon chief, and the Minister of Energy visited Ukraine. We have approved at least three important strategic documents (both in name and in fact!) – the Joint Statement on the Strategic Partnership of Ukraine and the United States, the Strategic Defense Framework and, finally, the Charter of Strategic Partnership, signed on November 10 by Dmytro Kuleba and Anthony Blinken.

But let’s find out.

What role do yesterday’s events play in restarting bilateral relations? And what is the updated document # 1 about?

A tool for collaboration

First, let’s talk about the Commission.

The fact that Americans have agreed to restore it means that the Biden administration is ready for a regular institutional dialogue with Ukraine, which was not the case under previous presidents.

For example, Trump’s presidency took more than a year and a half before the Commission finally met in November 2018. And under Obama, when Biden was vice president, the Commission failed to restart at all. The argument from Washington at the time was, “why do you need this if you have constant contact with the vice president himself.”

And although this year Biden, already as president, in one of his telephone conversations with Zelensky identified himself as a contact person with Ukraine (such was his answer to the Ukrainian president’s question, with whom he is better to contact), apparently, Washington also has understood that this is how international relations do not work.

So, in the end, Americans quickly agreed to restore the Commission.

The Commission has always been of interest to the Ukrainian authorities in terms of institutionalizing the dialogue and discussing the most sensitive issues – particularly the state of anti-corruption reforms – behind closed doors, rather than exchanging public criticism.

And now this need exists not only in Kyiv but also on the part of American partners, who are not very happy about the public criticism from the Ukrainian leadership, which has been heard from time to time over the past year.

The approach to the formation of the Commission during Zelensky’s presidency was also renewed.

Currently, Kyiv insists that the Commission should be either at the level of foreign ministers or at the level of presidents. The “asymmetric” format “President of Ukraine – Vice President of the United States”, which has been established so far (and even more so “President – Secretary of State”), is rejected as irrelevant and even perceived as a sign of disrespect for the Ukrainian president. This fits perfectly into Kyiv’s foreign policy concept, where the notions of “Ukraine’s subjectivity” and “respect for Ukraine” are particularly important.

However, one meeting is not enough.

It is now crucial to have meetings at least at the ministerial level. In addition, if Dmytro Kuleba succeeds in becoming the first Ukrainian foreign minister to hold a meeting of the Commission more than once, it will be a definite achievement. In the past, such commissions were one-time events for different heads of diplomatic missions.

Now for the Charter on Strategic Partnership, which Kyiv and Washington renewed on Wednesday – and also undertook to renew it at least once every 10 years.

Ukraine and the United States first signed a similar document in the last months of George W. Bush’s presidency in December 2008. At the time, it was seen as a kind of “moral compensation” to Ukraine for the NATO summit in Bucharest, where Americans failed to convince some European allies (especially Germany) of the idea of ​​providing Ukraine with a NATO Membership Action Plan.

Ukrainian side then tried to get the most out of it and offered to add a kind of “fifth article” to the Charter with security guarantees, but even with the second Bush Jr. administration, which was super loyal to security issues, this proposal did not pass.

Since 2008, everything has changed – both Ukraine and the world. Therefore, the renewal of the clearly outdated Charter (which did not even take into account the beginning of the Russian aggression in 2014) was an obvious need, which was repeatedly communicated with our American partners at various levels.

The Biden administration quickly agreed to this and promptly agreed on a new version of the Charter.

However, there are questions about the content of the signed document.

The first thing that caught my attention was the structure of the document. Especially when compared to the 2008 version.

Thus, the section “Strengthening Democracy” in it has become “Democracy and the Rule of Law,” thus emphasizing once again the importance of the rule of law, including through proper judicial reform, for US relations with Ukraine. In addition, in the updated Charter, Americans put democracy above economic and trade relations (in the first version, the situation was the opposite), which also indicates the current gradation of US policy priorities.

The paragraph “Economic, trade, and energy cooperation” is called “Economic transformation,” and it is, of course, about the transformation of Ukraine.

At the same time, it is surprising that the title of this section mentions energy, although, against the background of the current energy challenges and the White House’s behavior on Nord Stream 2, the updated Charter should have had a special emphasis on this word. Moreover, the substantive part has been preserved: the updated text refers to “support for Ukraine’s energy security.”

It seems that this renaming was not an initiative of Ukraine. After all, it seriously differed from the three priorities of the American agenda of Ukraine, which Kuleba proclaimed in Washington: 1) security; 2) energy security; 3) economic development, investment, and trade.

The updated Charter has been updated and detailed in some places, but not everywhere.

Some aspects of the document, on the other hand, seem vaguer and less convincing than in its first version, and this “vagueness” characterizes the current trends in American policy toward Ukraine.

By the way, this does not mean that Kyiv has agreed with all Washington’s approaches and proposals. For example, according to the author of these lines, the section on security and deterrence of Russian aggression from the Ukrainian supply “grew” by four new points compared to what was originally proposed by the Americans. In particular, theses on the proper assessment of Ukraine’s contribution to nuclear disarmament were added, mentioning the Budapest Memorandum, as well as a separate paragraph on closer cooperation between Ukraine and the United States “as key partners in the wider Black Sea region.” And the abstract wording of Ukraine’s commitment to the reforms needed for Ukraine’s “European and Euro-Atlantic aspirations” has been replaced by the importance of the reforms needed for ” full integration into European and Euro-Atlantic institutions .”

But despite these changes, the bloc about Ukraine’s aspirations for NATO is probably the weakest.

Its current wording is less ambitious than even in 2008, which also reflects the current trend in Washington’s relations – “no sharp moves along the lines of Ukraine-NATO.”

In particular, the wording of the “old” version of the document on joint efforts to “strengthen Ukraine’s candidacy for NATO membership” is lacking. The wording of 2008 that Ukraine’s membership in the Alliance is a common goal of the two countries did not find a place.

In general, it seems that the Ukrainian side has squeezed everything it could.

However, the reality is that the level of ambition of Kyiv and Washington is very different. While Ukraine’s aspirations are as ambitious as possible, American partners seem to be entirely satisfied with the current level of dialogue. Moreover, American cabinets are more convinced than ever: Ukraine is a strategic partner, but not always grateful.

All supporters of the Ukrainian-American partnership will have to “fight” the consequences of such a conviction in the near future.