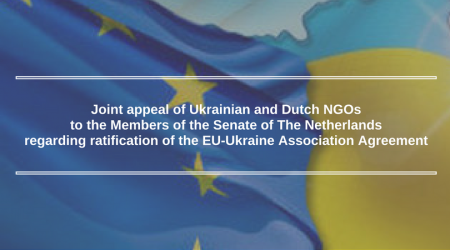 Honourable Members of the Senate,

Ukrainian civil society is very successfully engaged in democratic reforms in Ukraine. We welcome the recent approval of the Association Agreement by the Lower House of the Dutch Parliament. Based on our common values, it will be a milestone in strengthening long-term cooperation between Ukraine, the European Union and its Member States.

The Revolution of Dignity, which took place three years ago, started of Ukraine’s comprehensive transformation into a rule-of-law democracy. The Association Agreement, signed in 2014 will be extremely helpful for this transition. Its provisions are a powerful toolbox for further reforms aimed at eliminating corruption, enhancing rule of law, good governance and human rights. The Association Agreement will also encourage trade, employment and prosperity for Ukraine, The Netherlands and the EU.

Ukraine’s progress of reforms has already produced tangible results in key areas of political and economic life: our fight against corruption, reform of the judiciary, decentralization reform, reform of the economy and the energy sector.

Ukraine enacted more reforms in the last three years than in the preceeding twenty-three years combined since our independence in 1991. An institutional framework for independent and effective investigation and prosecution of top corrupt officials has been set up. Criminal cases against MPs, judges, heads of state-owned enterprises have been started. During one year, more than 270 proceedings were started. Just a few weeks ago, the incumbent head of State Fiscal (Tax) Service was indicted and taken into custody, which is unprecedented for our country.

To fight corruption very effectively, Ukraine has introduced one of the most advanced electronic systems in the world requiring public officials and politicians to disclose information about their private assets. More than 600,000 officials, including the President, Ministers and MPs, have already declared their assets. The disclosure system strongly facilitates bringing unscrupulous politicians to justice for illicit enrichment and fraud.

In the field of public procurement, public finance management, and access to governmental and public databases of social significance, high standards of transparency of public institutions have been set. The use of the electronic platform “ProZorro” for all public procurements has already saved about 300 million EUR of state funds. Additionally, one of the most corrupt services – traffic police – is being transformed into the new Patrol

police as part of the reform of law enforcement agencies. With all these measures undertaken, Ukrainian society is step-by-step developing zero-tolerance for corruption.

Ukraine’s judicial system is now being rebooted, with the introduction of integrity declarations and new qualification assessment of judges. For the first time in Ukraine’s history, an entirely new Supreme Court is being formed through open competition, which will set a new standard for judicial practice for years to come.

The decentralization reform has already brought tangible results for Ukrainian local communities, proving that devolution of powers and wider autonomy in administering local development budgets lead to an increase of local funds and a more efficient use of resources. Energy sector reform has helped to increase market transparency, encouraged energy saving, substantially reduced the fiscal burden of the energy sector and significantly reduced Ukraine’s dependence on gas imports from Russia. Ukraine’s civil society, significantly strengthened after the revolution, has been actively involved in both advocating for and implementing these progressive changes.

While we celebrate our successes, we are still aware that much remains to be done to pass the point of no return for the complex transformation of Ukraine. Despite these successes, completing Ukraine’s transformation into a modern rule-of-law based state, will be extremely difficult without intensive cooperation with our international partners, especially the European Union and its member states.

The Association Agreement is a lighthouse for Ukraine’s further transformation and implementation of the systemic reforms. That is why we would like to kindly ask you to support the ratification.

In addition to the essential encouragement of rule-of-law and democratic reforms, it is estimated that the Deep and Comprehensive Free Trade Area (an economic part of the Association Agreement) could nearly triple Dutch exports to Ukraine and nearly double Dutch imports from Ukraine, which will have a strong positive impact on the economies and employment opportunities in both countries.

We sincerely hope that you are willing to encourage and assist Ukrainian civil society to build a stable, democratic, rule-of-law country by ratifying the EU-Ukraine Association Agreement.

Sen Foundation for Research and Education on International Cooperation