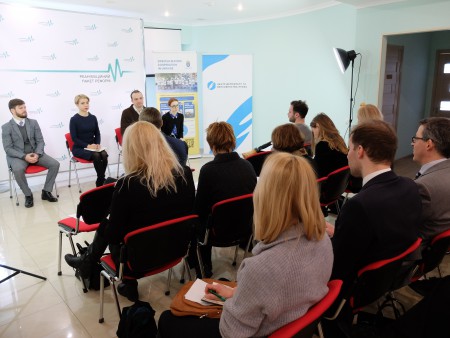 On February 8, the anticorruption group of the Reanimation Package of Reforms organized the reforms breakfast “Аnticorruption courts for Ukraine: model and advocacy perspectives”.

MP, Chairman of the Verkhovna Rada Committee on Corruption Prevention and Counteraction Yegor Sobolev together with our experts from Anticorruption Action Centre and Transparency International Ukraine presented the draft law No.6011, which envisages establishment of Specialized Anti-Corruption courts in Ukraine. Ukraine has new independent bodies for investigation and prosecution of cases of grand corruption, but does not have independent courts. Institutional triangle for breaking corruption impunity is thus incomplete and anticorruption institutions cannot show results.

Of 43 cases filed to courts by National Anticorruption Bureau of Ukraine (NABU) there are only 2 convictions and 11 judicially approved plea bargains with investigation, while remaining cases are stuck in courts, half of them not even open for trials.

Judicial reform does not yet cover first instance courts, where NABU cases are stuck. Moreover, bodies that select judges are not rebooted even by half and have already lost public trust. These bodies failed to dismiss judges who unlawfully ruled against participants of the Revolution of Dignity as well as judges who possess unjustified wealth. One of these bodies even failed to remove its members who is suspected in corruption-related crime.

Key provisions of the draft law #6011 on anticorruption courts:

Establishment of anticorruption courts with international participation in selection of judges will be the point of no return for breaking corruption impunity.

This brief overview of the draft law was prepared by the Anticorruption Action Center (ANTAC).

For a full version of a concept of Specialized Anti-Corruption courts, developed by a group of the RPR and ANTAC experts, please click HERE.