Reanimation package of reforms > News > Events > Amendments to the Constitution are Impossible without a Broad Public Discussion, MPs & Experts Say 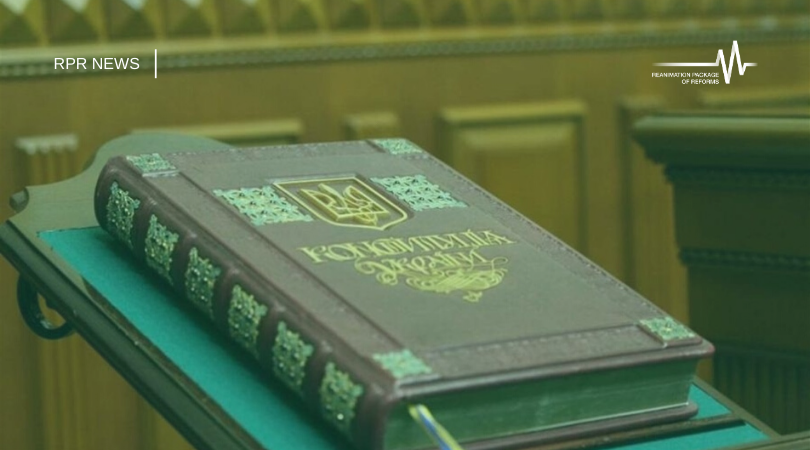 Amendments to the Constitution are Impossible without a Broad Public Discussion, MPs & Experts Say

Why did the CCU issue negative conclusions and warnings to a number of the President’s constitutional initiatives? What should be the priority of the amendments to the Constitution? When will the revised bill on constitutional changes in the field of decentralization appear in the Parliament? These and other issues were discussed by the participants of the online event “Regional Discussion of Reforms: Constitutional Reform“, organized by the Reanimation Package of Reforms Coalition on June 11.

On the first day of the Verkhovna Rada of Ukraine of the IX convocation, the President of Ukraine Volodymyr Zelensky submitted seven draft laws on amendments to the Constitution, each of which concerned certain aspects of the constitutional status of the Parliament and the President. These draft laws did not have a systemic connection, but they introduced an imbalance into the current mixed form of government through the strengthening of the President and the gradual weakening of Parliament. Yulia Kyrychenko, the author of the draft of the analytical brief “Constitutional Reform“, a member of the board of the Center for Political and Legal Reforms and co-chair of the RPR Coalition Board, spoke about this.

“Then there was a false start with constitutional changes in the field of decentralization of power. There were the same mistakes: a closed regime of drafting bills and a lack of public consultations,” Kyrychenko commented on the situation in December 2019 – January 2020, when the President twice introduced and twice withdrew the draft law amending to the Constitution.

But now there are positive changes in this situation.

“We hope that for the third time the proposed amendments to the Constitution on decentralization will be considered,” added the co-chair of the RPR Coalition Board and suggested moving the discussion on constitutional amendments from the President’s Office to Parliament with the participation of public experts and scientists.

Current challenges in the constitutional process mentioned in the brief:

Recommendations of the Parliament, the President and the Cabinet of Ministers on priority actions for 2020-2021:

Completing the decentralization reform is one of the priorities of the Servant of the People faction. And an essential aspect is the introduction of appropriate amendments to the Constitution. This was stated by the representative of the faction Fedir Venislavsky, a member of the Verkhovna Rada Committee on National Security, Defence and Intelligence.

He called the lack of broad public discussion of the constitutional amendments a strategic mistake. But several regional expert discussions were held to correct it.

“I hope that a new draft law amending the Constitution in the field of decentralization will be prepared soon. That this year’s local elections take place on a new constitutional basis,” the deputy said.

Another important priority, Venislavsky said, was to improve the bill on the appointment of the National Anti-Corruption Bureau of Ukraine and State Bureau of Investigation chairpersons by the President. In December 2019, the Constitutional Court ruled that these powers of the President threatened the independence of NABU and the SBI.

“We have taken into account the CCU remarks and are preparing a new draft law,” – sums up the MP.

The Batkivshchyna parliamentary faction will not support amendments to the Constitution regarding decentralization, which will strengthen the presidential power. This was emphasized by the representative of the faction Ivan Krulko, First Deputy Chairman of the Verkhovna Rada Committee on Budget.

“Control over local governments’ activities is necessary so that they do not exceed the limits of their powers. But it is inadmissible for the President to single-handedly elect the people’s representatives,” the deputy explained, expressing hope for a better draft law on constitutional amendments in the field of decentralization.

Krulko added that amendments to the Constitution should address urging political issues: an imbalance between branches of government and the powers of the head of state, which are not inherent in a parliamentary-presidential republic.

Now there are risks of new attempts at point constitutional amendments before the local elections, for example, on the issue of administrative-territorial structure, said Yaroslav Yurchyshyn, First Deputy Chairman of the Verkhovna Rada Committee on Anti-Corruption Policy.

However, in general, constitutional reform is currently out of Parliament’s attention.

“After the “turbo mode”, a period of turbulence began. The Verkhovna Rada adopts only urgent legislative initiatives, but constitutional reform does not belong to them, – says Yurchyshyn.

However, Ukrainians themselves do not consider constitutional reform important.

“People understand the inadequacy of state institutions. But they don’t understand that changes to the Constitution can correct it,” the MP speaks.

He likened the situation to judicial reform, which was met with public demand only through public experts and journalists.

There are currently two tendencies in the Parliament: ignoring the Constitutional Court’s negative conclusions regarding the President’s constitutional initiatives and violating the procedures for passing bills. Yuliya Gradova, Associate Professor of the Department of Constitutional and Municipal Law at VN Karazin Kharkiv National University, draws attention to this.

“Parliamentarians turn from MPs into servants of the President, supporting “pocket” amendments to the Constitution,” Gradova criticizing the MPs actions.

And due to violations of procedures, the adopted bills have been repeatedly declared unconstitutional by the Constitutional Court, she added.

The Constitution in democratic countries is a specific social contract between citizens and the state, making it impossible to make point changes to it as a sectoral law. Ihor Koliushko, Chairman of the Board of the Center for Political and Legal Reforms, draws attention to this.

Amendments to the Constitution must be a broad consensus in society. And the initiators of the current constitutional changes do not understand this or want to use them in their narrow interests.

“After two “blows to the bar” with constitutional changes regarding decentralization, the People’s Servant political party understood something and in February 2020 began a broad dialogue. But there is still no new draft law,” Koliushko sums up.

Oksana Syroid, head of the Samopomich Union political party, suggested focusing on constitutional amendments in two areas. The first is the balance of power at the national level: Parliament must control all executive powers in the areas of use of military forces and spending of money.

“In Ukraine, the defence budget submitted to the Parliament consists of 10 lines in an Excel spreadsheet. And in the USA it is 300 pages of the text where expenses for each article of the budget are specified,” – Syroid gives an example.

The second is the division of powers between the central and local levels.

“A significant redistribution of funds in favor of united territorial communities is needed. Today, the communities has about 20% of the money it accumulates. This figure is 40% in developed countries,” compares the chairman of the Samopomich Union political party.

Read also: “Regional Discussion of Reforms: On the Road to Vilnius” on the topic of reintegration of occupied territories organized by the RPR Coalition on June 5.