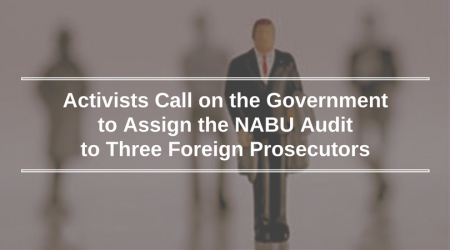 Members of the civil society coalition “Reanimation Package of Reforms”, the public organization Automaidan, the Anti-Corruption Action Centre, and Transparency International Ukraine urge the members of the Cabinet of Ministers to consider the following candidates for the position of NABU auditors: American Martha Boersch, the prosecutor who put Pavlo Lazarenko behind the bars; Carlos Castresana, a Spanish prosecutor who locked up 150 influential leaders of Guatemala for corruption; and Giovanni Kessler, an Italian prosecutor and the Director General of the European Anti-Fraud Office.

The Cabinet of Ministers of Ukraine has already begun selection of candidates for the position of its representative in the Commission that will monitor the effectiveness of the National Anticorruption Bureau of Ukraine and has to conduct the first-ever independent audit of its work from the time of its establishment.

Marta Boersch – a Russian-speaking American prosecutor who used to be the federal prosecutor for the Northern District of California for 12 years and managed to imprison in US the former Ukrainian Prime Minister Pavlo Lazarenko.

Carlos Castresana – a Spanish prosecutor, directed the International Commission Against Impunity in Guatemala created by the United Nations and put behind the bars 150 corrupt influential leaders of the country, including the former President Alfonso Portillo, three former interior ministers, four of the five army generals, three directors of the national police, businessmen, congressmen, drug dealers and human traffickers. The analogue of the Guatemalan Commission in Ukraine is the National Anti-Corruption Bureau.

Giovanni Kessler – an Italian prosecutor and the Director General of the European Anti-Fraud Office (OLAF), investigating any possible misuse of the funds of the European Union, examines the operational and financial work of any institution or body of the EU. OLAF is responsible for combating fraud and abuse in the use of funds from the budget of the European Union . Kessler was nominated by the EU Delegation in Ukraine and recommended to the Government by the Committee for Corruption Prevention and Counteraction. In addition, Kessller was a member of the committee for selection of the director of NABU – at the time his presence ensured the transparency of the commission work and impartiality of its result.

Ukraine’s legislation imposes rather strict requirements for candidates for the position of NABU auditors: they should have significant experience of work in the bodies of preliminary investigation, prosecution, and courts abroad or in international organizations.

“The experience, reputation and professional ethics of these candidates will allow them to professionally and impartially evaluate the first two years of work of the new Anti-Corruption body. In Ukraine, such an assessment will be held for the first time. It is important that its pioneers have experience of conducting impartial criminal investigations of corruption, because they are the ones to set the bar high for all future audits which the Anti-Corruption Bureau will have to undergo each year” – this is how Daria Kaleniuk, executive director of the Anti-Corruption Action Centre, explains the fact that anti-corruption activists opted for foreign experts rather than Ukrainian.

The international experts proposed by activists are recognized professionals who head or used to head for many years foreign law enforcement agencies specialized in fighting corruption and combating money laundering. Their experience is unique for Ukraine, where anti-corruption investigative bodies appeared several years ago.

“The reputation of the proposed candidates, their long-term experience and equidistance from all political forces in Ukraine will ensure fairness, transparency and objectivity of work of the commission auditors,” – says the executive director of Transparency International Ukraine Yaroslav Yurchyshyn. – “The auditors’ opinion should have credibility both within the country and abroad, as most NABU investigations have to do with money laundering beyond Ukraine’s borders. It is very complicated to investigate such crimes without international legal assistance of foreign colleagues, and their trust among other things is based on an objective assessment of the work of the law enforcement agency” – said Executive Director of Transparency International Ukraine, co-chair of the RPR Board Yaroslav Yurchyshyn.

“The authorities try to use the process of NABU’s auditors selection in order to influence the institution which we consider as the most independent in the whole system of law enforcement bodies. In particular, we are talking about the possible appointment of politically engaged, dependent “auditors” with the purpose to disable the activity of NABU”, – said Taras Shevchenko, Director of the Center for Democracy and the Rule of Law, co-chair of the RPR Board.