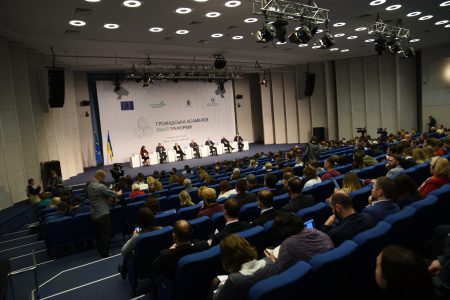 More than four hundred civil society activists from all over Ukraine gathered at the All-Ukrainian Civil Society Assembly “SMARTreforms”, organized by Reanimation Package of Reforms, in order to develop a joint action plan for implementing changes in the upcoming years.

The video broadcast of the first part of the forum is available here.

The forum began with keynote speeches delivered by the Ambassadors of the US, EU and Sweden, as well as by the Chairman of the First of December initiative group Yosyf Zisels.

The rule of law should become one of the key priorities for the government and for the civil society, – Head of the EU Delegation to Ukraine Hugues Mingarelli emphasized. “The first area, where civil society has to be vigilant and we as the international community have to be behind you, is the area of rule of law, because anything that is being done in this sector has an impact on the possibility to conduct reforms in other domains. I cannot omit mentioning the need for us to continue to tell the authorities every day that the new anticorruption court should be established. And this court has to be set up following the recommendations of the Venice Commission, and not by creating an undefined working group. The authorities have set up new anticorruption institutions, and we praise the creation of National Anticorruption Bureau, National Agency on Corruption Prevention and Specialized Prosecutor’s Office. But these institutions should be given independence and resourses that they need to carry out their tasks; otherwise, they will be useless.”- Ambassador Hugues Mingarelli

According to the US Ambassador to Ukraine Marie Yovanovitch, it is the civil society that plays the key role in the reforms implementation in Ukraine. “Today, the people in this room help drive these democratic reforms and help push the Parliament and the Government to do the same. There is strength in numbers, and to be most effective, you must unite in your efforts and concentrate on your focus, which I think is the purpose of this conference.” – Ambassador Marie Yovanovitch

From their part, Ukraine’s international partners are confirming again their support for reforms in Ukraine, – Martin Hagström, Ambassador of Sweden to Ukraine added. “My main task as an Ambassador and the main task of the Embassy is to support reforms in Ukraine. We try to be a strong voice in this process, particularly in the areas where Sweden is providing assistance. But it is important for you to know that we can never be as effective as you are, because it is your push and your agenda that set the limits for international actors in our efforts to support reforms”, – Ambassador Martin Hagström

During the forum, activists, experts, opinion leaders, journalists and representatives of international community discussed the main challenges and priorities for the future. The mounting pressure on civil society activists in the regions was one of the key topics discussed. Representatives of RPR and regional civil society coalitions expressed an appeal to the government to protect the activists from harassment and physical violence.

While working in the thematic groups, experts from different regions began to develop a joint action plan to unite the national and regional reform agendas and develop together the mechanisms of work and goals to be achieved in the coming years. The activists were working on the following directions: decentralization, education, public broadcasting, judicial reform, anti-corruption reform, energy efficiency, environment, healthcare, electoral reform, public procurement, open data and e-government.