Reanimation package of reforms > News > Columns > A step towards the recognition of ORDLO: what are the risks and opportunities for Ukraine posed by Russia’s withdrawal from the Minsk agreements 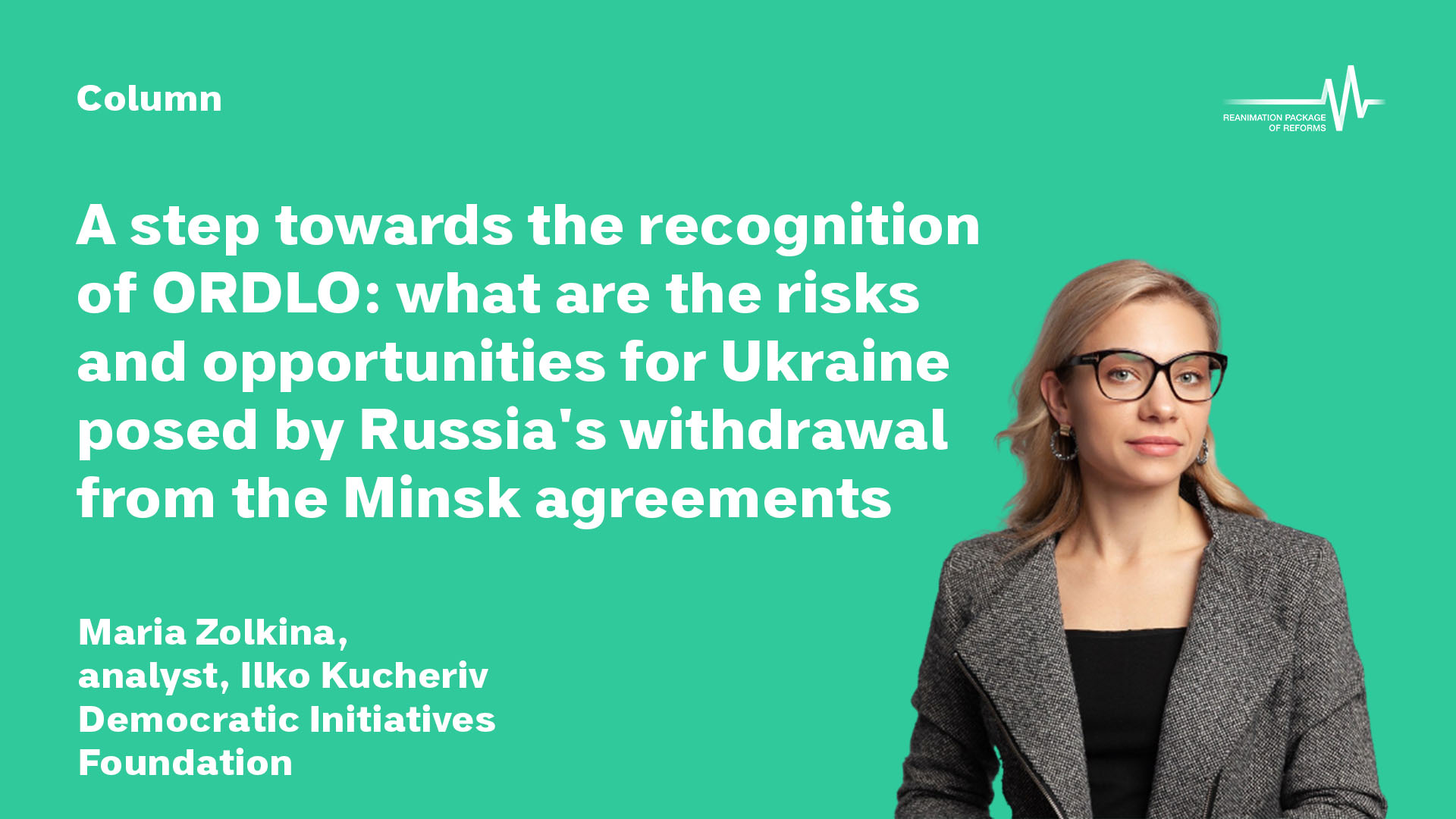 A step towards the recognition of ORDLO: what are the risks and opportunities for Ukraine posed by Russia’s withdrawal from the Minsk agreements

While the whole world is waiting for a possible military escalation from Russia, the Kremlin is taking a step towards recognizing the independence of the so-called “republics” in the occupied Donbas.

The State Duma of the Russian Federation made a corresponding appeal to Vladimir Putin on February 15. It is noteworthy that Russian MPs supported the draft appeal submitted by the opposition Communists, rejecting a more moderate draft of the “Yedinaya Rossiya”. This issue was sent for consideration to the department of Sergei Lavrov.

What does such a step by the Russian Federation mean? Should we expect the Russian president to recognize these pseudo-formations as “states”?

And how will this change the negotiating schedules between Ukraine, Russia, and the West?

And most importantly – which of the possible scenarios is safer for Ukraine?

The factor of pressure on the West

The Russian State Duma does not make decisions on its own.

Therefore, its decision to appeal to Putin to recognize the independence of the so-called “DPR / LPR” was a deliberate step.

Moreover, it did not coincide with the pre-scheduled visit of German Chancellor Olaf Scholz. More precisely, the corresponding vote was postponed for one day in order to synchronize it with Scholz’s visit.

However, this does not mean that the Russian president will necessarily satisfy this appeal.

The Kremlin currently has two basic options for using this tool.

But whichever Putin chooses, both will have serious diplomatic and even military consequences.

The first is not to recognize but to offer another “victory,”  which can explain or block another refusal to recognize the “republics of Donbas.” And such a victory can only lie in the sphere of negotiations with the West and Ukraine.

Therefore, if Putin does not sign the relevant decree in the coming days, Ukraine should expect increased pressure from both Moscow and some of our European partners.

Putin can not recognize the L/DNR and end up in a losing position only if he gains significant concessions from Ukraine.

Such a concession could be the beginning of a direct dialogue between Kyiv and Russian occupation administrations within the Minsk TCG. In a word – the launch of political points of the Minsk agreements.

Under this scenario, Russia may urgently try to convene a Norman meeting of advisers to raise the issue: either they recognize the subjectivity of pseudo-republics, or Ukraine agrees to begin active discussions on Minsk’s political points within the TCG.

Of course, Ukraine cannot be blackmailed by violating its own “red lines.”

However, in this case, it should be borne in mind that Paris and, to a greater extent, Berlin still do not give up hope of reaching compromises with Moscow, including on “Ukrainian” issues.

And they can officially warn Russia against such recognition, on the one hand, but at the same time – be loyal to the concessions of Ukraine in order to prevent the scenario of complete zeroing of “Minsk.”

Is there life after “Minsk”?

An alternative is that Putin recognizes the independence of these formations.

This may happen either in the coming days or a little later if the attempt to bargain for something in the West and Ukraine fails.

Such a scenario diplomatically plays into Ukraine’s hands.

Russia will be to blame for the withdrawal of the Minsk agreements for all Western governments without exception.

Complaints about the alleged non-fulfillment of “Minsk” can still be heard about Ukraine, but it is Russia that will openly withdraw from “Minsk.” And the reaction of the West is already consolidated in this direction.

Moreover, it is even recognized in Russia. For example, Putin’s spokesman Dmitry Peskov said that the recognition of self-proclaimed republics “does not correlate with the Minsk agreements.”

Such a step by the Russian Federation will mean that Kyiv will get a chance to restart the talks and not sign what then turns into “red lines.” However, this will clearly not happen in the near future.

However, at the same time, Russia’s withdrawal from the Minsk agreements is likely to increase the risks of large-scale military escalation.

After all, even if Russia now abandons the military scenario but recognizes the “L/DNR,” it easily implements the same scheme as in Abkhazia and South Ossetia – to openly deploy its troops in the occupied Donbas.

And although this will not significantly change the status quo with the presence of Russian troops in the Donbas, the “death of Minsk” will definitely freeze negotiations for many years before new agreements are reached.

And in addition – in this way, Russia is simply freeing its hands for a hybrid scenario of attack on Ukraine through the so-called “republics.”

The probability of a scenario when the new Russian offensive will start from the occupied Donbas is growing.

According to this scenario, at the beginning of the operation, as in 2014, Russia would deny the participation of its regular troops in this offensive.

But later, the L/DNR, as “independent states,” would turn to Russia for military and defense assistance. Or Russia itself initiates its intervention under the pretext of protecting Russian citizens – this is the probable reason why the mass issuance of Russian passports was carried out in the occupied territories.

And although from the point of view of international law, any of these reasons for the open intervention of the Russian army will be insignificant, Russia cares about the propaganda justification in this conflict and not about the legal one.

The main thing here is that the Ukrainian authorities should not make new political promises about the implementation of “Minsk.”

Another attempt to outwit the Russians by, for example, promising to amend or pass new laws on “special status,” changes to the Constitution and elections in the occupied territories, or the beginning of a dialogue with illegal representatives of the ORDLO in the TCG political subgroup will not make significant changes in Ukraine’s favor. But it can play against our interests.

At least, because such promises can be used not only in Moscow, but also by Berlin and Paris.

Therefore, despite the possible escalation at the frontline, Kyiv should perceive this whole game of Moscow with the recognition of “L/DNR” as another political hoax.

Disagree with concessions, use recognition to systematically accuse Russia of disrupting eight-year talks, and at the same time remain prepared for the worst – military actions.