Reanimation package of reforms > News > Uncategorized > 80% OF THE OLD JUDGES ARE TO BE SELECTED TO THE NEW SUPREME COURT, 25% HAVE DUBIOUS REPUTATION – RESULTS OF THE COMPETITION 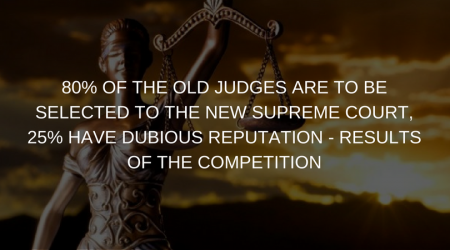 80% OF THE OLD JUDGES ARE TO BE SELECTED TO THE NEW SUPREME COURT, 25% HAVE DUBIOUS REPUTATION – RESULTS OF THE COMPETITION

Yesterday, the High Qualification Commission of Judges published the list of 120 winners of the competition to fill the offices at the new Supreme Court. Based on the calculations of the Anticorruption Action Centre, most of them – almost 80%, or 93 candidates, – are incumbent or former judges.

Only 27 winners out of 120 candidates come from outside the judiciary: legal scholars or attorneys. Thus, the new Supreme Court will consist mainly of the old judicial staff.

30 candidates out of the 120 selected by the HQCJ to fill the offices at four courts of cassation within the Supreme Court have received negative opinions from the Public Integrity Council.

It means that every fourth judge of the new Supreme Court, selected by the HQCJ, has violated human rights, adopted politically motivated rulings, or cannot explain the origin of their income.

Most winners with a negative opinion of the PIC – nine out of 30 candidates recommended by the Commission – will end up in the Administrative Court of Cassation within the Supreme Court. It is this court that shall pass final rulings in the cases when Ukrainians appeal against the decisions, actions or inaction of any institution of power.

Out of 30 prospective judges of the Criminal Court of Cassation, six have received negative opinions from the PIC, mainly for the violations of human rights and decisions of the European Court of Human Rights, as well as for adopting politically motivated rulings.

Eight and seven candidates who received negative opinions from the public activists will be appointed to the economic and civil courts of cassation within the Supreme Court respectively.

Although the President has loudly stated that the Supreme Court of Ukraine will be rebooted and the HQCJ Chairman Serhiy Koziakov claimed that the selection process was unprecedentedly transparent, the winners in the competition held by the HQCJ are old judges, some of whom have dubious professional ethics or the experience of political persecutions to the benefit of the authorities.

For example, in the Criminal Court of Cassation within the Supreme Court, only five candidates out of 30 have no judicial experience, while six candidates have received negative opinions from the PIC. The Criminal Court of Cassation shall adopt final rulings and/or review the cases of the National Anticorruption Bureau (NABU). According to the Code of Criminal Procedure, such cases are considered at a court of appeal by a panel of seven judges. In each of such panels authorized to review the NABU cases there will be at least one judge who violated the right to defense or has the experience of political persecutions.

Out of 30 would-be judges of the Civil Court of Cassation within the Supreme Court, 25 are incumbent judges (18 of them working at the Higher Specialized Courts). Another two judges – Liashchenko and Simonenko – are working as judges at the Supreme Court of Ukraine.

Most candidates without judicial experience will be appointed to the Economic Court of Cassation within the Supreme Court: 12 out of 30 candidates have not been involved in the judiciary so far.

Now the High Council of Justice shall vote for all the 120 candidates. After that the President shall personally sign the orders on their appointment.

Ranking of the Candidates to the Supreme Courts – PDF