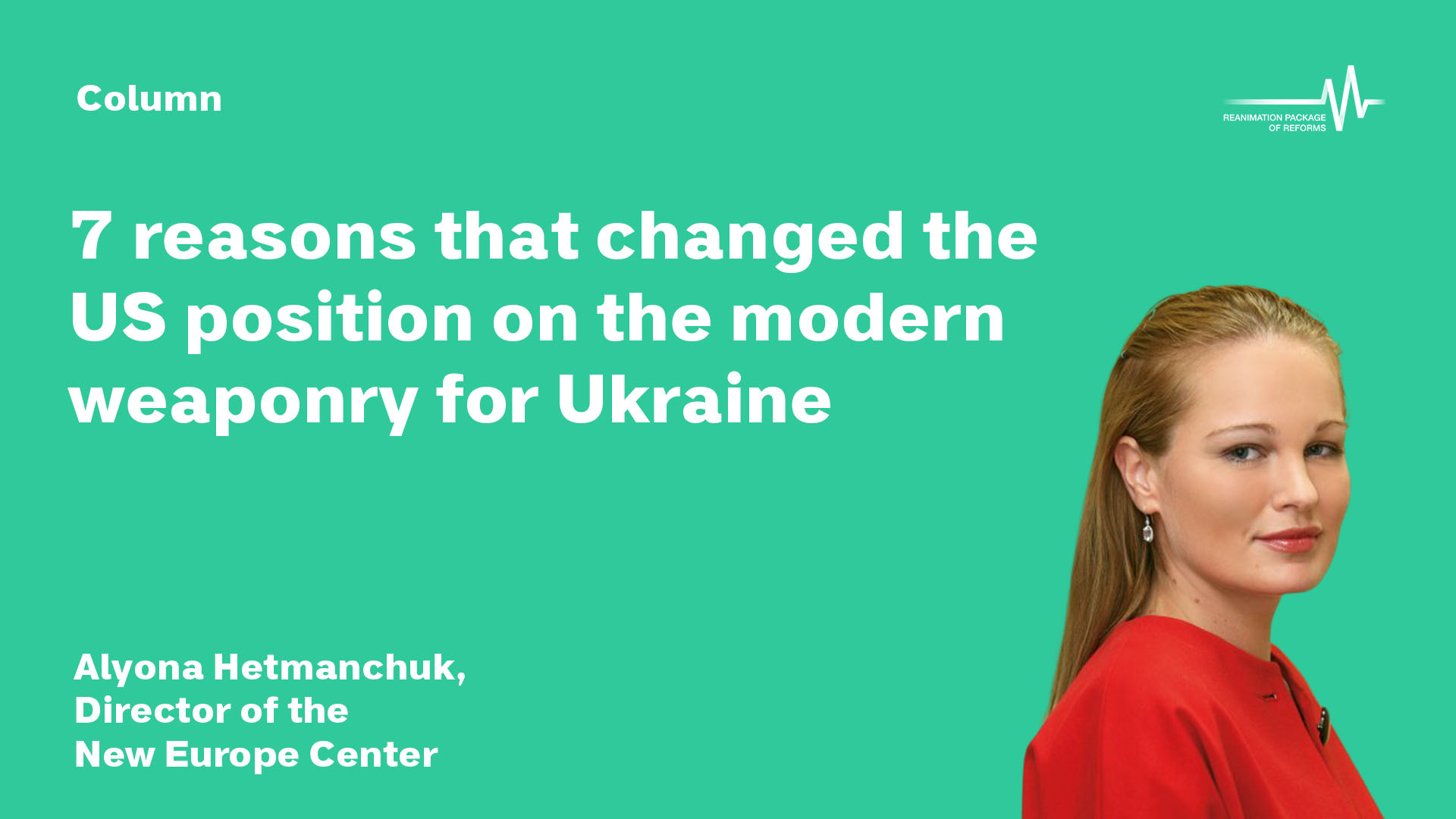 President Joe Biden and the United States have come a long way in supplying weapons to Ukraine.

The path from scrupulous analysis of whether or not military aid to Ukraine is “too military”, from the grueling but fruitless Obama-Biden debate on the Javelins to the green light to supply heavy offensive weapons, chief coordinator of military assistance to Ukraine in the world and the law on land lease.

The result is impressive, considering that this path took the US eight years. By comparison, Germany has gone from being reluctant to supply arms in principle to agreeing to provide heavy weapons in just a few months.

Why has Washington adjusted its policy for so long? And what ultimately led him to do so?

The future of Ukraine-US relations will also depend on the answers to these questions.

After all, the current level of support from the United States is already sufficient for a worthy resistance to the aggressor. However, it is still not enough to completely defeat him.

Why is it important to analyze the transformation of American approaches to arms supplies?

Because weapons have long been an indicator not only of the level of military support for Ukraine by the United States.

Finally, weapons indicate how steadily the US administration is committed to the “do not provoke Putin” principle, which, unfortunately, will take place in one form or another as long as the Russian president has such “arguments” as a tactical nuclear strike.

During the presidency of Barack Obama (and, consequently, Vice President Joe Biden), there were several main reasons why the US administration did not give the green light for the supply of defense weapons to Ukraine.

First, there is a lack of trust in the Ukrainian armed forces and the Ministry of Defense in general – in Washington, there was no confidence that the Ukrainian military will be able to effectively use the weapons provided and ensure that they do not fall into enemy hands (and not only on the battlefield).

Secondly, the unwillingness to aggravate relations with European capitals – in particular, Berlin, which was strongly opposed to providing Ukraine with the same “Javelins”.

And third and foremost, the fear of provoking Putin.

Even during Biden’s presidency and the current large-scale war, some of these arguments also stood in the way of faster political decisions on the supply of arms and equipment and the quantities that Ukraine needed.

First of all, it is a reluctance to provoke Putin even more – especially in the context of the possibility of a tactical nuclear strike.

But there were also serious discussions about the risks of American weapons falling into Russian hands, which were eventually recognized at the administration level as less than the risks of not providing Ukraine with heavy weapons.

Finally, it was not until mid-April, almost two months after the start of the war, that the administration decided to supply Ukraine with heavy weapons, and Congress finally passed a law on land-lease.

By the way, this law was registered in Congress in January 2022, that is, before Zelensky presented this idea at the Munich Security Conference in February.

Why has there been such a change of approach?

Apparently, this was a decision that was formed gradually and under the pressure of various factors – not only the official explanations of the US government that the nature of the war is changing, and therefore the Ukrainian army will need other weapons.

It is important to identify all of these factors today in order to understand not only the full multidimensionality of the American design-making process but also what to emphasize in our dialogue with our key security partner.

So, let’s move directly to the factors.

Military successes of the Ukrainian army and its effective use of weapons. Some military representatives of the US government are watching the actions of their Ukrainian colleagues with sincere admiration.

Most of my American interlocutors say that if Ukraine is to thank anyone for persuading Biden to start providing heavy weapons, it is primarily the Pentagon.

The Pentagon’s statements about the record set by Ukrainians for the use of “Javelins” – 100 accurate hits on the target to 112 shots  – is just one of the manifestations of such enthusiasm.

If we talk in this sense about a turning point in the military, then such a moment, according to those with whom we had to communicate on this topic in Washington, was the expulsion of Russians from Kyiv and Chernihiv.

The military successes of Ukrainians, backed by Western weapons, have also added to the belief that Ukraine can defeat Russia.

This allowed the Pentagon to speak more convincingly in its meetings with Biden and to push back in the background the “do not provoke Putin” position. Jake Sullivan, a national security adviser, has been and remains a key advocate of this position in the administration.

One of the arguments that particularly appealed to the American president was the effective use of American weapons by the Ukrainian military.

Accordingly, one can see Secretary Blinken’s vague declarations that Ukraine will win strategically transformed into clear statements by Austin at Ramstein that “more than 40 countries have come together to help Ukraine win the fight against Russia’s unjust invasion.”

The atrocities in Bucha, the humanitarian catastrophe in Mariupol. The barbaric actions of the Russian army blurred the line between defensive and offensive weapons.

For more and more Americans, it became clear that Ukrainian officials and experts had been trying to spread across the Atlantic for several months: in the case of Ukraine, the division into defense and offensive weapons doesn’t make much sense because Ukraine needs both for defense and even humanitarian goals.

Pressure from Congress. There have been cases in which congressmen simply sent letters to the White House with an attached list of weapons demanded by the Ukrainian side.

At one point, however, the offices of congressmen and senators were simply overwhelmed with lists of military needs from Ukraine, and some of these lists differed, which did not help much, but in the end the process was systematized.

There were other nuances, such as the somewhat different position of the far-left flank of the Democratic Party and the far-right Republican on what the US response should be to the war in Ukraine and how far Americans could go in arming Ukraine.

In the end, 10 representatives of the latter did not vote for the lend-lease in the House of Representatives, while Democrats voted all.

The factor of the upcoming elections in the United States.

Biden’s response to Ukraine is currently a topic that is rated much better than his responses to other domestic issues.

Thus, according to a Reuters / Ipsos poll, Biden’s policy toward Ukraine is approved by 46% of Americans (70% of Democrats), while 37% support his economic policy.

Therefore, it is in the interests of the administration to make the most of Ukraine’s topic.

In addition, 73% of Americans are in favor of arms supplies to Ukraine. The administration, which came to power under the slogans of “middle-class diplomacy” (a real point of Jake Sullivan), is very sensitive to the fact that, in fact, this middle class is thinking about this or that issue.

The shift of the European position on weapons. Against the background of European countries, which did not provide anything to Ukraine in terms of armaments, even the American “Javelins” and “Stingers” looked like a super achievement.

But as the position of the European allies, with which Biden constantly tried to coordinate his position, was seriously corrected, this opened the way for the Americans to do even more.

In other words, the effect worked: the United States is ready to go as far as Europeans are willing to follow.

Zelensky’s personal involvement. Ukraine constantly needs his constant appeals – up to the video in English, where he listed specific types of weapons.

This is the case when it is important not only what was asked but who asks. Moreover, in this particular case, it is also essential when it is asked.

If the Ukrainian president had done this in the United States before the war, he would hardly have been heard (yes, in fact, he wasn’t heard).

But since the beginning of the full-scale aggression, everything has changed – his popularity has grown so much that in polls of confidence in the leaders of the United States, he overtook not only Biden but also other foreign leaders – Macron and Scholz.

It is one thing to deny the President of Ukraine, whose name appeared in the scandal with the impeachment of Trump, and another – to the one who actually embodied the heroic resistance of the Ukrainian people in the columns of the American media.

Lack of serious reaction from Russia to arms supplies.

Apart from periodic threats from the Russian Ministry of Foreign Affairs to attack weapons that are coming to Ukraine, there were no serious attacks.

So, as we can see, the list of factors influencing the change in US approaches is quite extensive.

Given that the requests of the Ukrainian side to the American side are far from being fulfilled, all of them must be taken into account and carefully worked out in the future.

It is crucial to understand here that domestic political factors will play an increasingly important role with the approach of the by-elections in November this year.

On the one hand, Biden has public trust in Ukraine’s active support, and on the other, administrations are beginning to ask more and more questions about why the president cares so much about Ukraine and so little about the well-being of ordinary Americans.

Much will depend on how effectively the Ukrainian armed forces can use their weapons and give a decent rebuff to Russian troops.

If for Ukraine it is a question of survival, then for Biden, it is a powerful argument that his policy towards Ukraine has worked.

In fact, in his nearly 50-year political career (more than the age of the Ukrainian president), Biden has clearly lacked significant achievements in the area he has been most concerned with – foreign and security policy.

Russia’s war is a case in which Ukraine’s victory will indeed be a victory for the United States and the entire free world and a personal political victory for President Biden.

But even during the war, it is crucial to prove that American investment in other areas has not been in vain and the war is not being used as a screen to roll back important reforms.

Ultimately, we need to continue to work with American society. It is essential that the President of Ukraine himself continues to do this, given his level of popularity.

Personally, it is unclear to me when Zelensky’s office is willing to interview supposedly Russian opposition journalists, but requests for exclusive interviews with key American media have been ignored for months.

It is also essential to work on key European tracks in parallel.

Biden’s tendency to coordinate crucial international issues with European allies in the event of Russia’s war works in such a way that the United States sets a bar, and the closer the European allies get, the more Washington has reason to raise that bar.