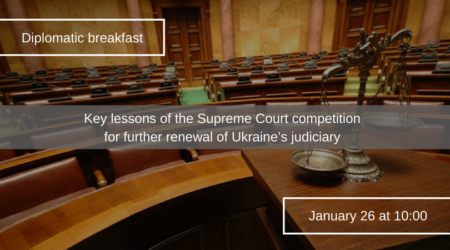 We would like to cordially invite you to the diplomatic breakfast “Key lessons of the Supreme Court competition for further renewal of Ukraine’s judiciary,” which will take place on January 26 (Friday) at 10:00 am – 11:30 am. The event will start with a welcome coffee at 9:30 am.

In 2016, a comprehensive judicial reform was formalized by the amendments to the Constitution of Ukraine and the new Law of Ukraine “On the Judiciary and Status of Judges”. Establishment of the new Supreme Court, which became operational in December 2017, was the milestone for reorganization of Ukraine’s judicial system and the key element of its renewal.

For the first time in Ukraine’s history, the highest judicial body was formed through an open competition. However, despite the high expectations of the public and the international partners of Ukraine, the competition was far from exemplary in terms of transparency and fairness. Unfortunately, the selection of 22% of judges who received negative opinions of the Public Integrity Council raised concerns about the integrity of the newly established Supreme Court.

Nevertheless, while the composition of the Supreme Court is already a fait accompli, the procedures that applied in the course of this competition will be definitive for the selection of judges of lower instances, as well as for qualification assessment of 1,000 judges from various courts in the upcoming months. The lessons of the Supreme Court selection will also allow to avoid numerous pitfalls during the formation of the High Anti-Corruption Court and the selection of anti-corruption judges.

If you are interested in this event, please kindly confirm your participation by filling out the registration form by January 25.

Should you have any questions, please do not hesitate to contact Сhristina Parandii at kristinaparady@gmail.com or by cell phone +38 (050) 052 10 82.

The event is supported by the European Union and the Center for Democracy and Rule of Law (project «Enhancement of the RPR coalition») within the project “Advocacy and communication of the judicial reform in Ukraine” implemented by the non-governmental organization “DEJURE Foundation”.